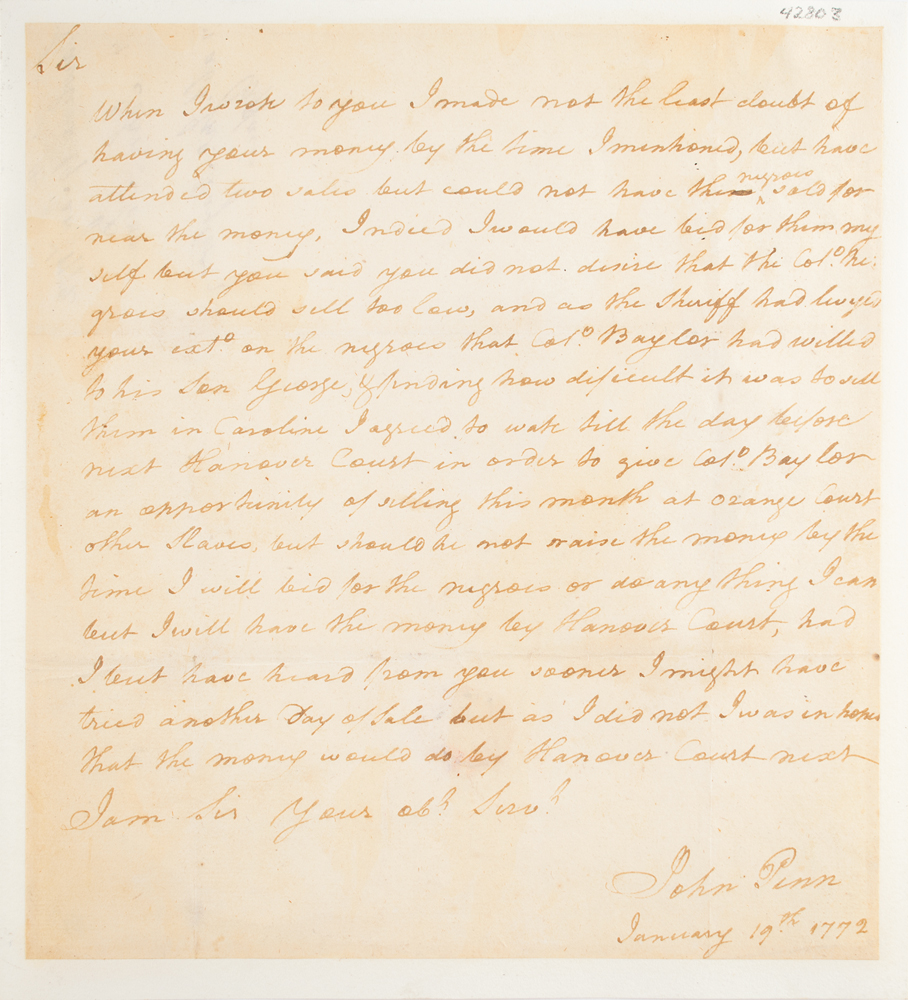 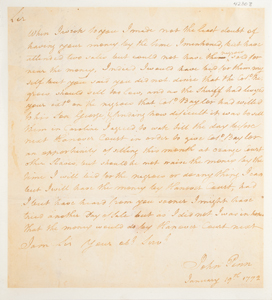 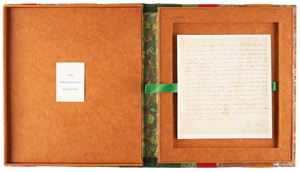 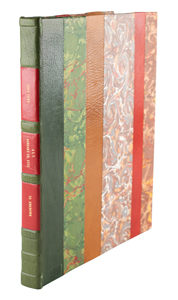 Signer of the Declaration of Independence and the Articles of Confederation as a representative of North Carolina (1741-1781). ALS, one page, 7 x 7.75, January 19, 1772. Addressed from Caroline, Virginia, a handwritten letter to an unidentified recipient discussing the sale of some of Col. John Baylor's slaves, in part: "When I wrote to you I made not the least doubt of having your money by the time I mentioned, but have attended two sales but could not have the negroes sold for near the money. Indeed I would have bid for them myself but you said you did not desire that the Col. negroes should sell for low, and as the Sheriff had…your ext. on the negroes that Col. Baylor had will to his son George, & finding how difficult it was to sell them in Caroline, I agreed to wate till the day before next Hanover Court in order to give Col. Baylor an opportunity of selling this month at Orange Court other slaves, but should he not raise the money by the time I will bid for the negroes or do any thing I can but I will have the money by Hanover Court, had I but have heard from you sooner I might have tried another day of sale but as I did not I was in hope that the money would do by Hanover Court next.” Professionally inlaid into a slightly larger sheet. Includes a custom clamshell presentation case, with label to inside indicating that the letter derives from “The Thomas A. Gray Collection.” In fine condition.

Only the second handwritten letter from Penn that we have offered, this particularly early example not only predates his move to Williamsboro and his eventual entrance into the political arena, but it likewise palpably depicts Penn’s casual attitude, and that of colonial Virginia, towards an apparently overcrowded slave market. His upbringing in rural Virginia, the largest colony in the union, which had much wealth tied up in its tobacco crop and slave trade, likely introduced and accustomed Penn to the presence and utility of slaves at a very young age. Although Penn’s true stance on slavery remains uncertain, history shows that many of the Founding Fathers acknowledged that slavery violated the core American Revolutionary ideal of liberty.

At the Second Continental Congress, held in Philadelphia in 1775, Penn declared, ‘My first wish is for America to be free.’ With the Revolutionary War over, the subsequent liberation of slaves would seem a logical next focal point for Penn given his pronouncement, but uprooting such a deep-seated, money-driven institution would ultimately pose problematic for a new nation struggling to adhere to its rights, principles, and fragile intersectional harmony. Only a Civil War, some 80 years later, would finally cast off the iron shackles of America’s original sin.

In his 1995 reference book History Comes to Life, Kenneth Rendell places John Penn's autograph material into the 'very rare' category among the Signers. Penn’s career, brief yet prolific, was punctuated by six years in Congress and as a signatory of the Halifax Resolves (the North Carolina Constitution), the Articles of Confederation, and the Declaration of Independence. His health diminished by the wear of his Congressional tenure, Penn died at the age of 47, shortly before George Washington took office as the first President of the United States.

John Baylor IV (1750-1808) of Newmarket, Caroline County, was the eldest son of John Baylor III (1705-1772), a wealthy planter and one of the most significant importers and breeders of thoroughbred horses in pre-Revolutionary America, many of which attracted the mares of George Washington for breeding. The George Baylor mentioned in this letter served as Washington’s aide-de-camp during the Revolutionary War.