18-year-old air cadet “Virgil” Grissom is determined to reach his aviation dreams: “They can wash me out from here on, any place and for anything. But I'm going to give it all I've got” 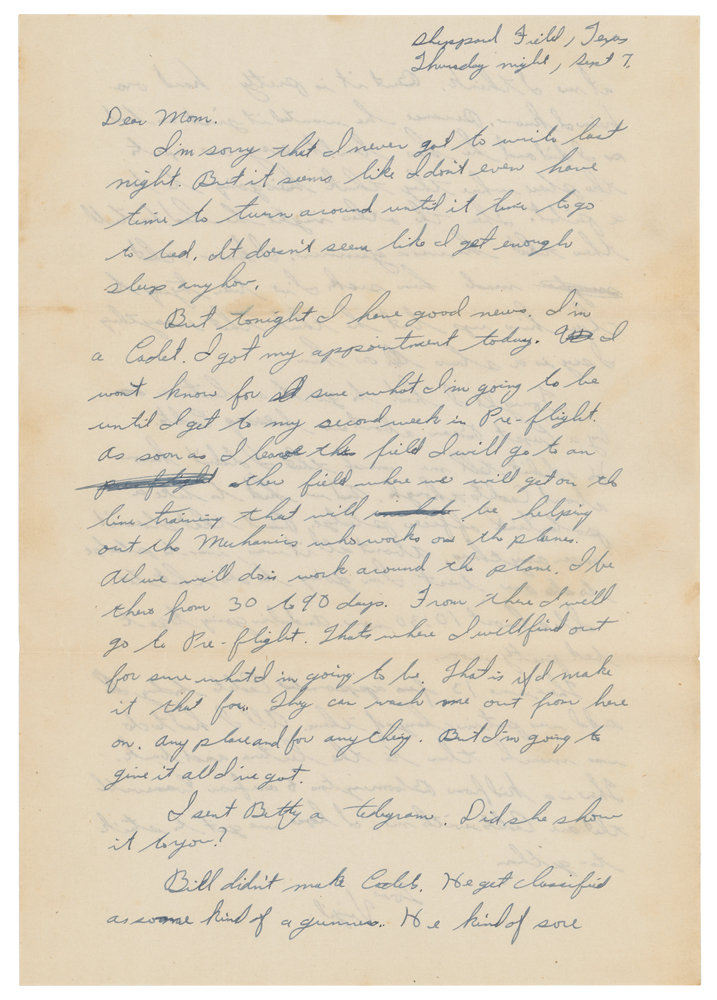 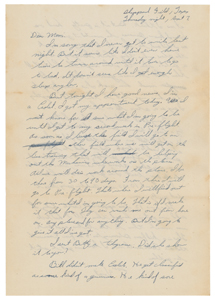 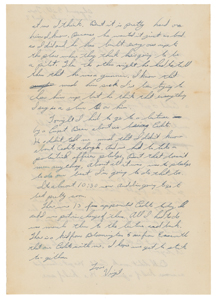 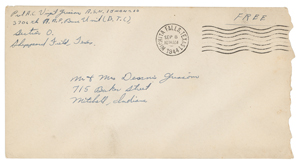 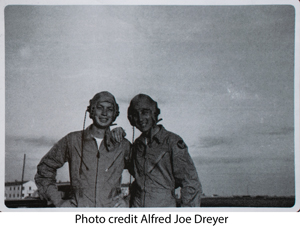 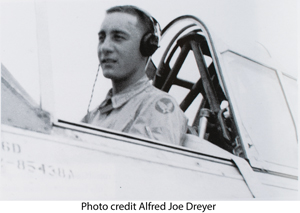 18-year-old air cadet “Virgil” Grissom is determined to reach his aviation dreams: “They can wash me out from here on, any place and for anything. But I'm going to give it all I've got”

World War II-dated ALS signed “Virgil,” one page both sides, 7.25 x 10.25, September 7, 1944. Addressed from Sheppard Field in Texas, a handwritten letter to his parents, Dennis and Cecile Grissom, in full: "I'm sorry that I never got to write last night. But it seems like I don't even have time to turn around until it time to go to bed. It doesn't seem like I get enough sleep anyhow. But tonight I have good news. I'm a Cadet. I got my appointment today. I won't know for sure what I'm going to be until I get to my second week in Pre-flight. As soon as I leave the field I will go to another field where we will get on the line training that will be helping out the Mechanics who work on the planes. All we do is work around the plane. I be there from 30 to 90 days. From there I will go to Pre-flight. That's where I will find out for sure what I'm going to be. That is if I make it that far. They can wash me out from here on, any place and for anything. But I'm going to give it all I've got. I sent Betty a telegram. Did she show it to you? Bill didn't make Cadets. He got classified as some kind of gunner. He's kind of sore at me I think. But it is pretty hard on him I know. Because he wanted it just as bad as I did and he has built every one up to the place where they think he's going to be a pilot. Then the other night he had to tell them that he was a gunner. I know that made him sick. I've been trying to cheer him up but he think that everything I say is a slur on him. Tonight I had to go to a lecture by a Capt. Bean about us being Cadets. He didn't tell me much that I didn't know about Cadets though. And we had to take a potential officer pledge. But that doesn't mean anything. About all it was, was to pledge to do our best. I'm going to do that too. It's almost 10:30 now. And I'm going to go to bed pretty soon. There were 13 of us appointed Cadets today and I was put in charge of them. All I had to do was march them to the lecture and back. There is a kid from Bloomington & one from Evansville that are Cadets with me. I hope we get to stick to-gether." In fine condition, with faint toning to the folds and edges. Includes the original hand-addressed mailing envelope, which Grissom has free-franked in the upper right and, in the return address field, he has incorporated his signature: "Pvt. A. C. Virgil Grissom…3706th A.A.F. Base Unit (B.TC.), Section O."

Accompanied by a signed letter of authenticity from Grissom's brother, Lowell, which reads: "Virgil joined the Air Force after graduating from high school with the hope of becoming a pilot. He was accepted as an Air Cadet, however, when the war ended, he was discharged. Using his GI bill he was able to earn a degree in Mechanical Engineering and rejoined the Air Force. He achieved his dream of becoming a fighter pilot and flew 100 combat missions in Korea. He was chosen as one of the original Mercury Astronauts and was the first American to go into space twice. He was the command pilot for the first Apollo mission and perished along with his crew, Edward White and Roger Chaffee in a fire on the launch pad. The 'Bill' referred to in the letter was a high school classmate that joined with Virgil."

Grissom’s path towards becoming one of the nation’s best fighter pilots is a true underdog story that did much in sculpting the remainder of his legendary career. As confirmed in this letter, Grissom earned his cadetship after five weeks of basic flight training at Sheppard Field in Wichita Falls, Texas. The appointment proved an exciting moment, but the bulk of his subsequent reassignment at Boca Raton Army Airfield in Florida, was spent toiling behind a desk as a clerk.

Four months after he married Betty Moore, his high school sweetheart, Grissom discharged from military service in November 1945 and, with the aid of his G.I. Bill, enrolled at Purdue University, working part-time as a cook while taking night courses to finish early. Grissom graduated with a degree in mechanical engineering in February 1950 and, undeterred, reenlisted with the newly formed U.S. Air Force. After receiving his pilot wings and moving his family of three to Maine, he was dispatched to fight in Korea in February 1952.

Grissom’s two years in Korea with the 334th Fighter Squadron proved invaluable. He flew 100 combat missions during approximately six months of service, and was awarded the Distinguished Flying Cross and the Air Medal with an oak leaf cluster for his military service. Following the war Grissom attained his captainship and a degree in aeromechanics, with his wartime experience and recent assignment as a test pilot at Edwards Air Force Base soon gaining the attention of NASA. On April 13, 1959, Grissom received official notification that he had been selected as one of the seven Project Mercury astronauts, beating out a group of 110 highly trained test pilots in the process. Written from his basic flight training school, this is a remarkably early letter from the 18-year-old Grissom that dates to the very nascency of his aviation career.