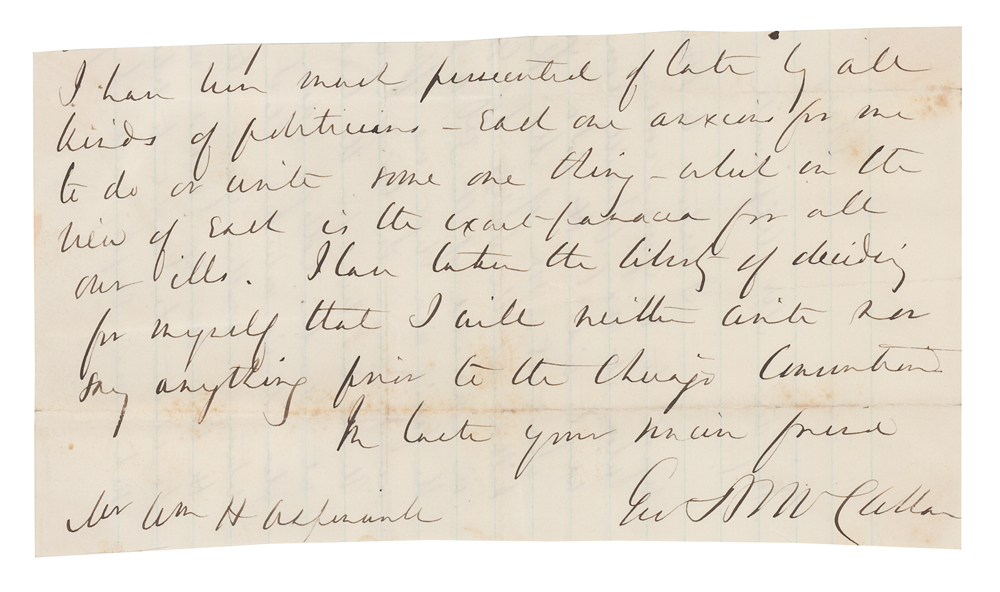 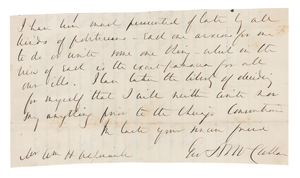 Civil War-dated partial ALS signed “Geo. B. McClellan,” one page, 8 x 4.25, no date (circa 1864). The close of a handwritten letter addressed to prominent American businessman William Henry Aspinwall, in full: "I have been much persecuted of late by all kinds of politicians—each one anxious for me to do or write some one thing, which in the view of each is the exact panacea for all our ills. I have taken the liberty of deciding for myself that I will neither write nor say anything prior to the Chicago convention." In very good condition, with multiple folds, overall creasing, old mounting remnants at the corners, and irregular trimming affecting readability.

Accompanied by an ALS from Aspinwall forwarding the McClellan letter to an autograph-collecting friend, in full: "Remembering your book of autographs I send you the enclosed conclusion of a letter received from Gen. McClellan just before his nomination, showing he made no bid for it. It may have a historical value, but I think the chances are much against his election at present."

The outcome of the 1864 Democratic National Convention, held at The Amphitheatre in Chicago, Illinois, between August 29-31, resulted in McClellan being nominated to run against Abraham Lincoln in the forthcoming U.S. presidential election. 'Lincoln won the election handily, with 212 Electoral College votes to 21, and a popular vote of 2,218,388 to 1,812,807 or 55% to 45%. For all his popularity with the troops, McClellan failed to secure their support and the military vote went to Lincoln nearly 3-1.'