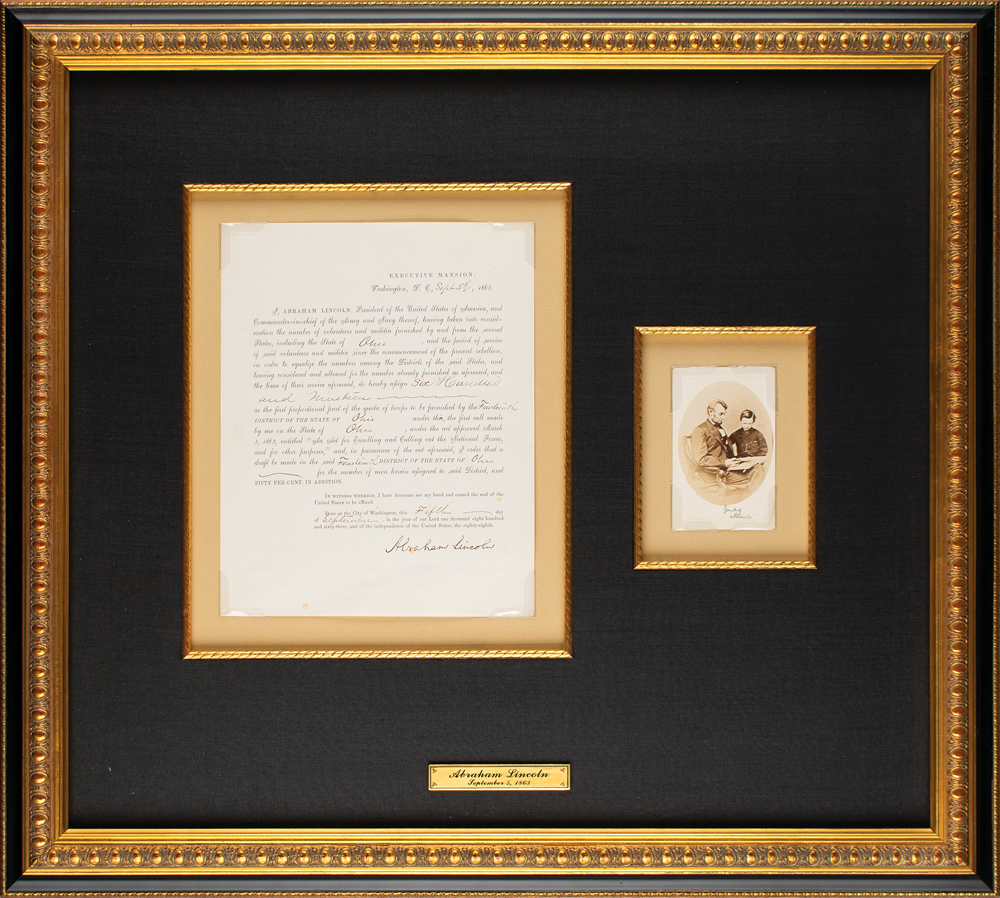 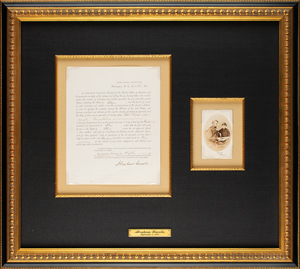 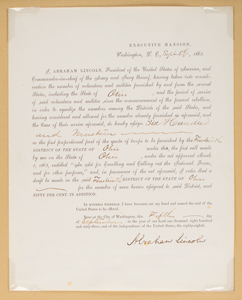 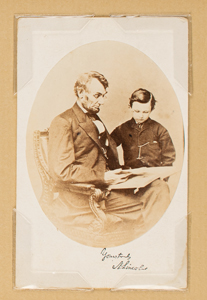 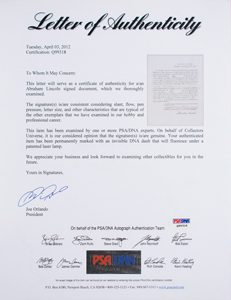 Civil War-dated partly-printed war-dated DS as president, one page, 7.75 x 9.75, September 5, 1863. Draft order for the Union Army issued by President Lincoln from the Executive Mansion, sent to the War Department. In full: "I, Abraham Lincoln, President of the United States of America, and Commander-in-chief of the Army and Navy thereof, having taken into consideration the number of volunteers and militia furnished by and from the several States, including the State of Ohio, and the period of service of said volunteers and militia since the commencement of the present rebellion, in order to equalize the numbers among the Districts of said States, and having considered and allowed for the number already furnished as aforesaid, and the time of their service aforesaid, do hereby assign Six Hundred and Nineteen as the first proportional part of the quota of troops to be furnished by the Fourteenth District of the State of Ohio under this, the first call made by me on the State of Ohio, under the act approved March 3, 1863, entitled 'An Act for Enrolling and calling out the National Forces, and for other purposes,' and in pursuance of the act aforesaid, I order that a draft be made in the said Fourteenth District of the State of Ohio, for the number of men herein assigned to said District, and fifty percent in addition." Corner-mounted, matted, and framed with an original CDV portrait of Lincoln reading with his son (bearing a facsimile signature) under UV-protective museum glass to an overall size of 25 x 22. A few tiny stains, otherwise a choice example in fine, clean condition. Accompanied by a full letter of authenticity from PSA/DNA.

In 1863, Lincoln established a military draft to replenish the Union Army's depleted ranks, and signed this draft requisition targeting men in the Buckeye State-specifically, a request for at 619 troops from Ohio's 14th district as part of "the first call made by me on the State of Ohio." The concept of conscription was controversial in the war-torn Union, with the Conscription Act requiring states to draft men to serve in the armed forces if individual states did not meet their enlistment quotas through volunteers. The federal government oversaw the draft and created provost marshals to enforce it; all white men between the ages of 20 and 45 were eligible. The Conscription Act permitted drafted men to pay a $300 fee or hire a substitute to escape service if they were drafted. More than 310,000 Ohioans would serve in the Northern army for varying lengths of time, exceeding the government's quota by 4,332 soldiers. A controversial but necessary wartime order.