Fitzgerald's defense of Tender Is the Night: "The novel does really deal with deep dark matters, screaming girls tied to the railroad tracks" 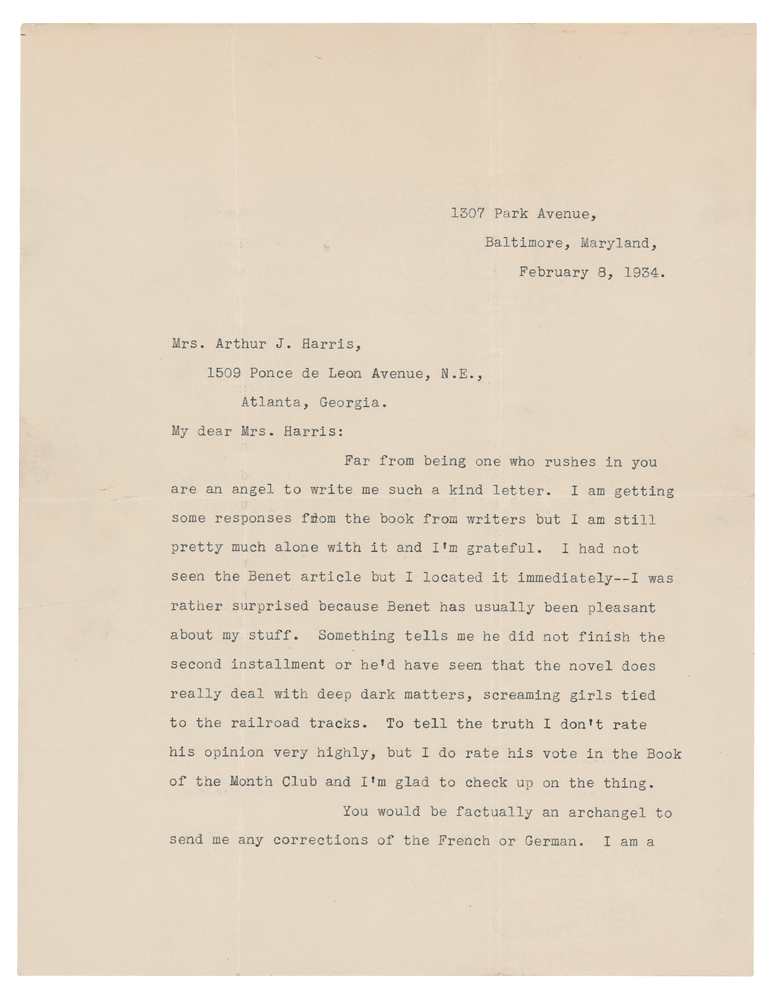 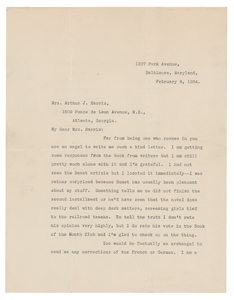 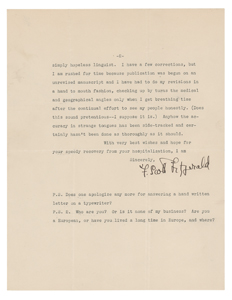 Fitzgerald's defense of Tender Is the Night: "The novel does really deal with deep dark matters, screaming girls tied to the railroad tracks"

TLS, two pages, 8.5 x 11, February 8, 1934. Letter to Mrs. Arthur J. Harris, in full: "Far from being one who rushes in you are an angel to write me such a kind letter. I am getting some responses from the book from writers but I am still pretty much alone with it and I'm grateful. I had not seen the Benet article but I located it immediately—I was rather surprised because Benet has usually been pleasant about my stuff. Something tells me he did not finish the second installment or he'd have seen that the novel does really deal with deep dark matters, screaming girls tied to the railroad tracks. To tell the truth I don't rate his opinion very highly, but I do rate his vote in the Book of the Month Club and I'm glad to check up on the thing. You would be factually an archangel to send me any corrections of the French or German. I am a simply hopeless linguist. I have a few corrections, but I am rushed for time because publication was begun on an unrevised manuscript and I have had to do my revisions in a hand to mouth fashion, checking up by turns the medical and geographical angles only when I get breathing time after the continual effort to see my people honestly. (Does this sound pretentious—I suppose it is.) Anyhow the accuracy in strange tongues has been side-tracked and certainly hasn't been done as thoughtfully as it should…P.S. Does one apologize any more for answering a hand written letter on a typewriter? P.S. 2. Who are you? Or is it none of my business? Are you a European, or have you lived a long time in Europe, and where?" In fine condition, with a repaired tear to the left side of the first page.

Now considered one of Fitzgerald's greatest novels, Tender Is the Night received lukewarm reviews upon its publication. It was serialized in Scribner's Magazine in four installments between January and April 1934, so at the time he wrote this letter only half of the novel had been released. The critical article he mentions was just a few sentences in William Rose Benet's regular column 'The Phoenix Nest' in The Saturday Review of February 3, 1934. In it, Benet opines, 'Scott Fitzgerald's new novel, beginning in Scribner's, has been quite a disappointment to me,' adding that his evaluation was based on the first two installments. Even so, Benet points out, 'The man can write as always, sometimes brilliantly.'

Benet was indeed one of Fitzgerald's admirers, and he was one of few contemporary reviewers to recognize The Great Gatsby as a distinctly American masterpiece. Fitzgerald also comments on the lack of copyediting for Tender Is the Night, which was riddled with spelling mistakes and errors that created chronological inconsistencies. Despite revisions, many of these made it into the book and numerous critics refused to forgive the sloppiness; Clifton Fadiman listed thirteen spelling errors in his New Yorker review. Since that time, Tender Is the Night has earned a place in the pantheon of American literature, and with Fitzgerald's own commentary on its publication, this letter is of tremendous literary interest.