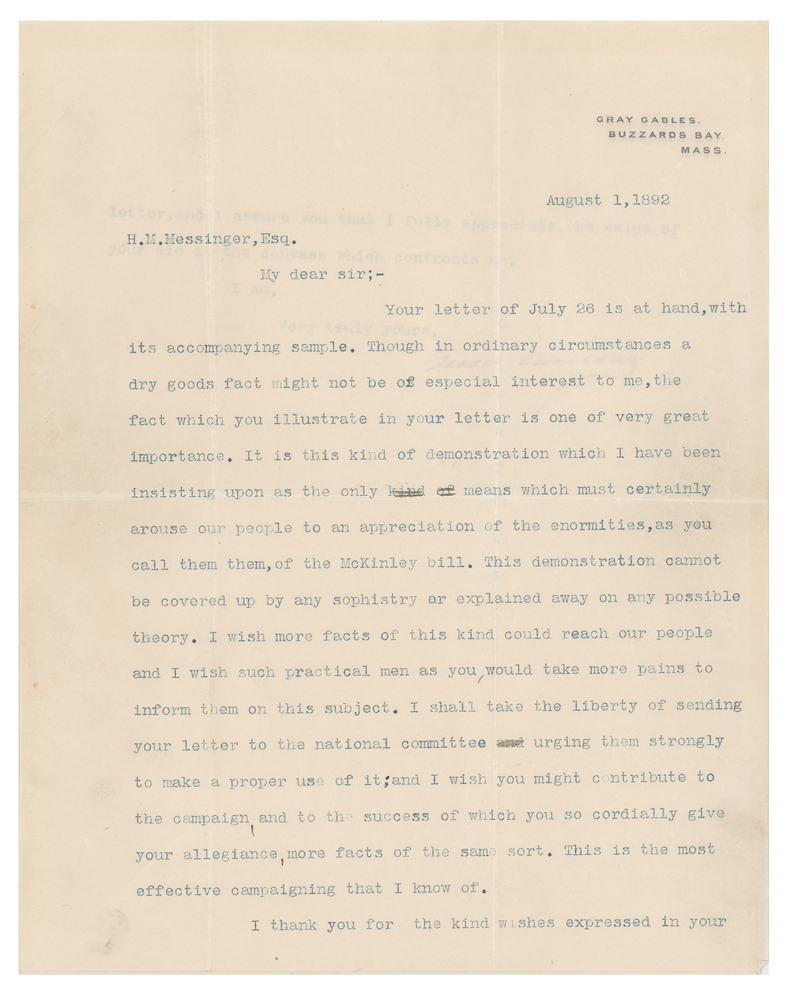 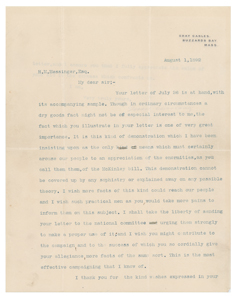 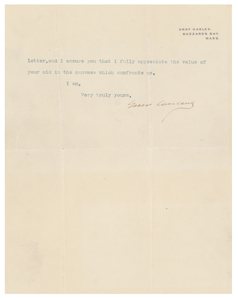 TLS, two pages, 7.75 x 10, personal Gray Gables, Buzzards Bay letterhead, August 1, 1892. Letter to H. M. Messinger, speaking out against the McKinley Tariff. In part: "Though in ordinary circumstances a dry goods fact might not be of especial interest to me, the fact which you illustrate in your letter is one of very great importance. It is this kind of demonstration which I have been insisting upon as the only means which must certainly arouse our people to an appreciation of the enormities, as you call them, of the McKinley bill. This demonstration cannot be covered up by any sophistry or explained away on any possible theory. I wish more facts of this kind could reach our people and I wish such practical men as you would take more pains to inform them on this subject. I shall take the liberty of sending your letter to the national committee urging them strongly to make a proper use of it; and I wish you might contribute to the campaign, and to the success of which you so cordially give your allegiance, more facts of the same sort. This is the most effective campaigning that I know of…I assure you that I fully appreciate the value of your aid in the canvass which confronts us." In fine condition.

An attorney from Buffalo, New York, Grover Cleveland had been a reformist mayor and governor before winning the Presidential election of 1884, becoming the first Democrat to win that office since the Civil War. He ran for re-election in 1888, but lost to Republican Benjamin Harrison. At the date of this letter, Cleveland was once again the Democrats’ Presidential candidate, running in a rematch against Harrison. He would win the election in November, making him the only US president ever to serve two nonconsecutive terms.

As the 1892 race progressed, Cleveland sought to make the McKinley Tariff Act, passed in 1890, a key issue. The law bore the name of future President William McKinley, who in 1890 had been a Republican Congressman from Ohio and the chairman of the House Ways and Means Committee which drafted the bill. The McKinley tariff was a protectionist measure that increased the rates on dutiable imports to a record high level—an average of 48 percent. President Benjamin Harrison, who had run on a high tariff platform, had signed the bill into law. Once adopted, however, the act created widespread discontent, with its critics arguing that the legislation caused higher prices. Cleveland, long a proponent of a lower tariff, sought to take advantage of the law’s unpopularity in his campaign.

The tariff issue did contribute to Cleveland’s victory in November, and after taking office, he called a special session of Congress to deal with the matter. Unfortunately, the bill that emerged from Congress was a far cry from what he sought. Although the Gorman-Wilson tariff bill did lower rates, it did so only modestly, and it was laden with special interest provisions. Ultimately, Cleveland allowed the bill to become law without his signature.