Wilberforce, one of Britain's leading abolitionists, muses hopefully on ending the evils of slavery—“I rejoice that our Country at least has abandoned the guilty Commerce in Flesh & Blood & that I look forward with confidence to its entire termination” 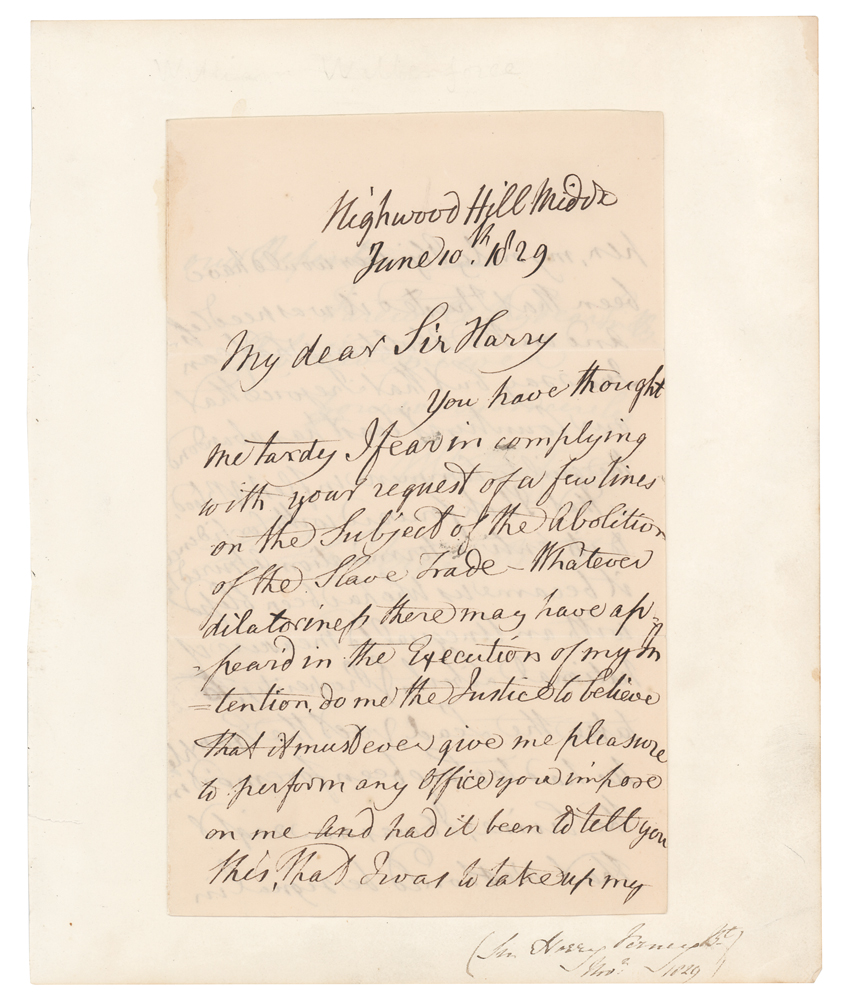 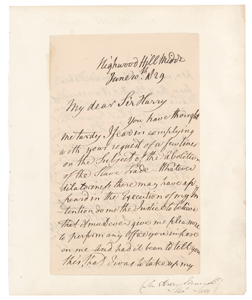 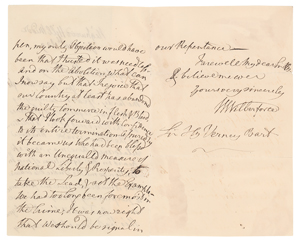 Wilberforce, one of Britain's leading abolitionists, muses hopefully on ending the evils of slavery—“I rejoice that our Country at least has abandoned the guilty Commerce in Flesh & Blood & that I look forward with confidence to its entire termination”

British politician, evangelist and philanthropist (1759-1833) who played an important role in the movement to abolish slavery. ALS signed “W. Wilberforce,” three pages on two adjoining sheets, 4.5 x 7.25, June 10, 1829. Written from Highwood Hill, a letter to fellow abolitionist Sir Harry Verney, 2nd Baronet, in full: "You have thought me tardy I fear in complying with your request of a few lines on the Subject of the Abolition of the Slave Trade. Whatever dilatoriness there may have appeared in the Execution of my Intention, do me the Justice to believe that it must ever give me pleasure to perform any office you impose on me and had it been to tell you this, that I was to take up my pen, my only Objection would have been that I trusted it was needless and on the Abolition, what can I now say but that I rejoice that our Country at least has abandoned the guilty Commerce in Flesh & Blood & that I look forward with confidence to its entire termination. Assuredly, it becomes us who had been blessed with an Unequaled measure of National Liberty & Prosperity, to take the Lead, & set the Example. We had too long been foremost in the Crime; It was now right that we should be signal in our Repentance." Reverse of second integral page is affixed to a slightly larger sheet. In very good to fine condition, with a split to the bottom of the hinge, and light staining to the last page from mounting.

Harry Verney, Baronet [1801-1894], an Evangelical who married Frances Nightingale, the sister of Florence, entered the British House of Commons in 1832 and sat as a Member of Parliament for Buckingham until 1841. After his election, one of the very first votes he cast was in favor of the Whig-supported Slavery Abolition Act 1833, which, if passed, would abolish slavery in parts of the British Empire. The act served as the grand culmination of Wilberforce's campaign for the complete abolition of slavery, and, as such, when the bill was introduced, Wilberforce was formally saluted. Just three days after hearing that the passage of the Act through Parliament was assured, Wilberforce, weakened from a severe bout of influenza, passed away at the age of 73.

This item is Pre-Certified by PSA/DNA
Buy a third-party letter of authenticity for $35.00