“The Republican House and Republican Senate have seemed to me to be as weak and blind & destitute...Even if there be no purpose to bring on civil war, will not halting, blundering, arrogant imbecility stumble on it?“— Pierce... 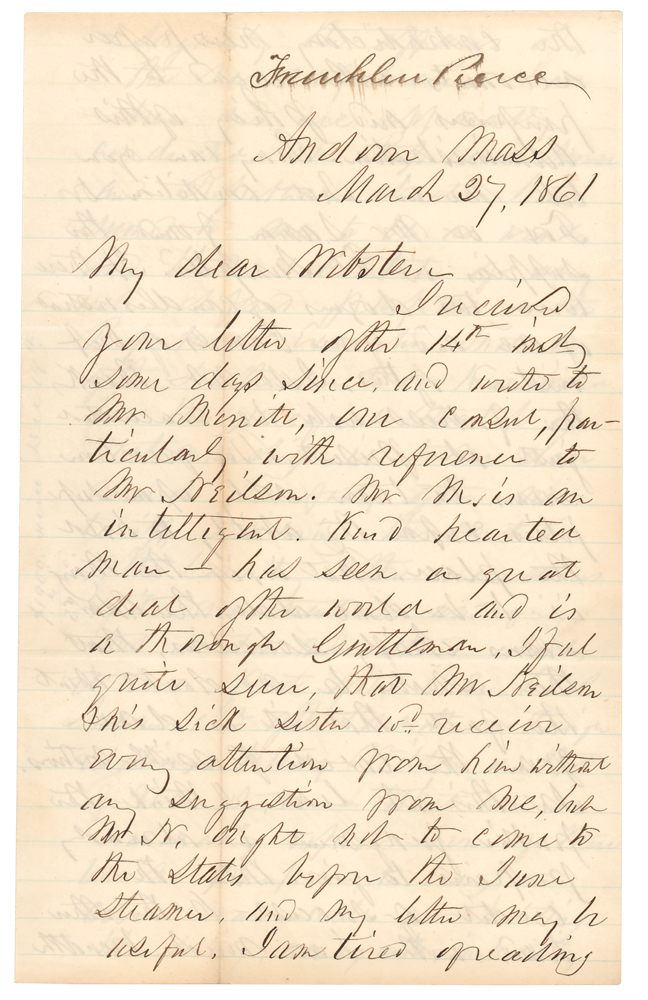 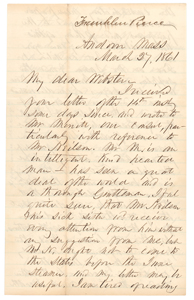 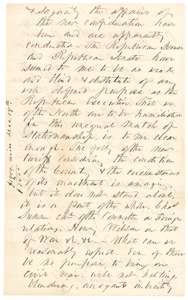 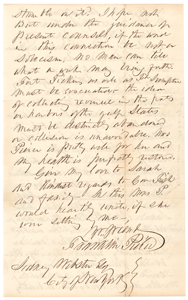 “The Republican House and Republican Senate have seemed to me to be as weak and blind & destitute...Even if there be no purpose to bring on civil war, will not halting, blundering, arrogant imbecility stumble on it?“— Pierce...

ALS, four pages on two adjoining sheets, 5.25 x 8.5, March 27, 1861. Letter to his former private White House secretary Sidney Webster, in full: "I received your letter of the 14th inst. some days since, and wrote to Mr. Merritt, our consul, particularly with reference to Mr. Neilson. Mr. M. is an intelligent kindhearted man—has seen a great deal of the world and is a thorough Gentleman. I feel quite sure, that Mr. Neilson & his sick sister w’d receive every attention from him without any suggestion from me, but Mr. N. ought not to come to the States before the June steamer, and my letter may be useful. I'm tired of reading the contradictory newspaper accounts with regard to the purposes and policy of this administration. Pray can you tell me in what condition Dr. Fox or Mr. Lamon found the supplies in Ft. Sumpter [sic]? If there were two dozens of candles instead of one and four barrels of beef instead of two I do not think the fortress will be evacuated just at present. The question seems to turn solely upon supplies & upon the ability to hold the place. That is, if the thing is to be done at all, the Adm’n seems chiefly solicitous, that there shall be no doubt about the fact that it is done from the lowest possible motives. In this at least I think the public judgment is already prepared to give them the credit of success—on the other hand with how much breadth and sagacity the affairs of the new confederation have been and are apparently conducted—The Republican House and Republican Senate have seemed to me to be as weak and blind & destitute of any well defined purpose as the Republican Executive. That we of the North are to be humiliated in this unequal match of statesmanship, is to me clear enough. The folly of the new tariff considering the condition of the country & the circumstances of its enactment is amazing, but it does not stand alone, it is a part of the whole. Chas. Sumner Ch’r of the Committee on Foreign relations, Henry Wilson on that of war, etc. etc.—what can we reasonably expect. Even if there be no purpose to bring on civil war, will not halting, blundering, arrogant imbecility stumble on it? I hope not but under the guidance of present counsels, if the word in this connection be not a solecism, no man can tell what a week may bring forth. Fort Pickins [sic] as well as Ft. Sumpter must be evacuated—The idea of collecting revenue in the ports or harbors of the Gulf States must be distinctly abandoned or collision is unavoidable. Mrs. Pierce is pretty well for her and my health is perfectly restored. Give my love to Sarah and kindest regards to Gov. Fish and family—In this Mrs. P. would heartily unite if she were sitting by me—.” In fine condition.

Shortly after leaving the White House in 1857, Pierce returned to his native New Hampshire and then embarked on a three-year tour of Europe and the Bahamas. During his time abroad Pierce maintained correspondence with Webster, the son-in-law of Senator Hamilton Fish and a brilliant Manhattan lawyer who, in 1892, published Franklin Pierce and His Administration. The election of Abraham Lincoln as the “Republican Executive” compelled South Carolina to secede from the Union on December 20, 1860, a decision that placed the still-under-construction Union garrison of Fort Sumter directly within enemy territory. Confederate demands to surrender the fort were ignored and President Buchanan’s attempts to transport troops and provisions to the Charleston sea fort were repulsed on January 9, 1861, when cadets from the Citadel fired upon the merchant steamer Star of the West. The resupply of Fort Sumter became the first major crisis for President Lincoln, and three months later, on April 12, the fortress served as the site of the first battle of the Civil War. Handwritten letters by Pierce remain scarce and highly sought-after, with this example all the more remarkable given Pierce’s commentary on a pivotal event that led to the outbreak of the Civil War just sixteen days later.