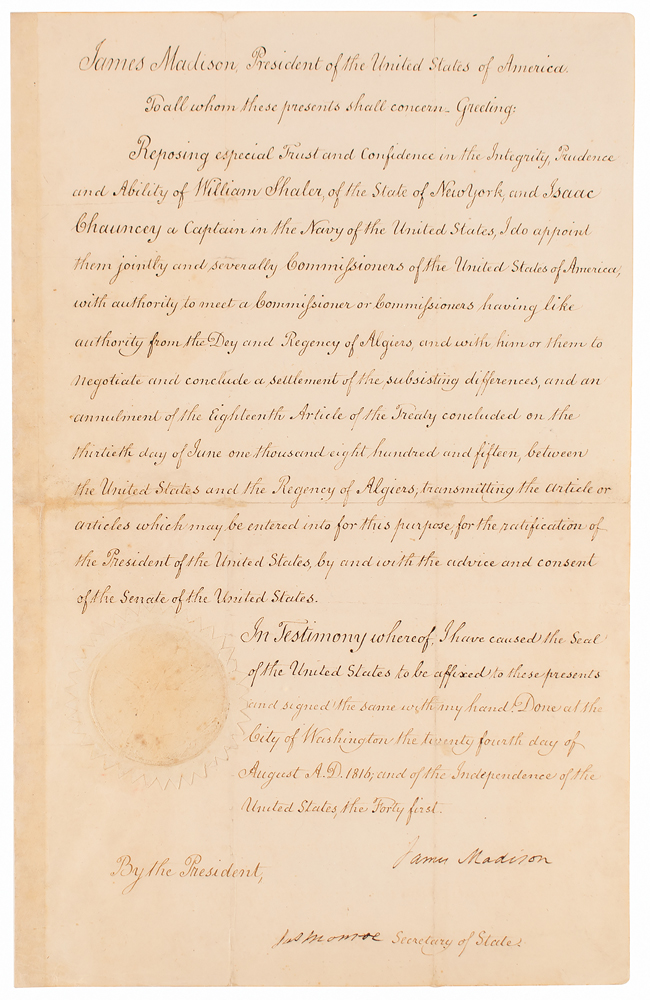 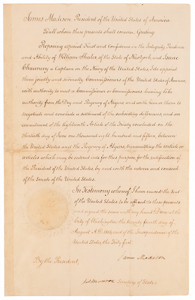 Manuscript DS, signed "James Madison" as president and "Jas. Monroe" as secretary of state, one page, 10.25 x 16.25, August 4, 1816. Appointment for William Shaler and Isaac Chauncey to participate in peace negotiations with the Dey of Algiers in the aftermath of the Second Barbary War, naming them "Commissioners of the United States of America, with authority to meet a Commissioner or Commissioners having like authority from the Dey and Regency of Algiers, and with him or them to negotiate and conclude a settlements of the subsisting differences, and an annulment of the Eighteenth Article of the Treaty concluded on the thirtieth day of June one thousand eight hundred and fifteen, between the United States and the Regency of Algiers, transmitting the article or articles which may be entered into for this purpose, for the ratification of the President of the United States, by and with the advice and consent of the Senate of the United States." Boldly signed at the conclusion by President Madison and countersigned by Secretary of State Monroe. The embossed white paper seal affixed to the lower left remains fully intact. In fine condition, with professional repairs and reinforcements to small areas of paper loss and intersecting folds.

William Shaler and Stephen Decatur had negotiated an end to the Second Barbary War in a peace treaty signed on June 30, 1815. However, Dey Omar Agha of Algeria repudiated the agreement, refused to accept the terms of peace that had been ratified by the Congress of Vienna, and threatened the lives of all Christian inhabitants of Algiers. By this appointment, Shaler and Isaac Chauncey were named as commissioners to settle the dispute. While they were in Algiers to negotiate, on August 27, 1816, a combined Anglo-Dutch squadron under Lord Exmouth bombarded the harbor, further weakening the Dey. This made Shaler and Chauncey's charge easier: they successfully re-negotiated terms of the peace in December 1816, modifying only Article 18 of the previous treaty in order to give the United States no advantage over other nations in Algerian ports. The only other concession allowed to the Dey was a certificate stating that he had signed the treaty under compulsion. Interestingly, due to an oversight, final action on the renewed treaty was not taken until 1822, when the Senate approved its ratification.