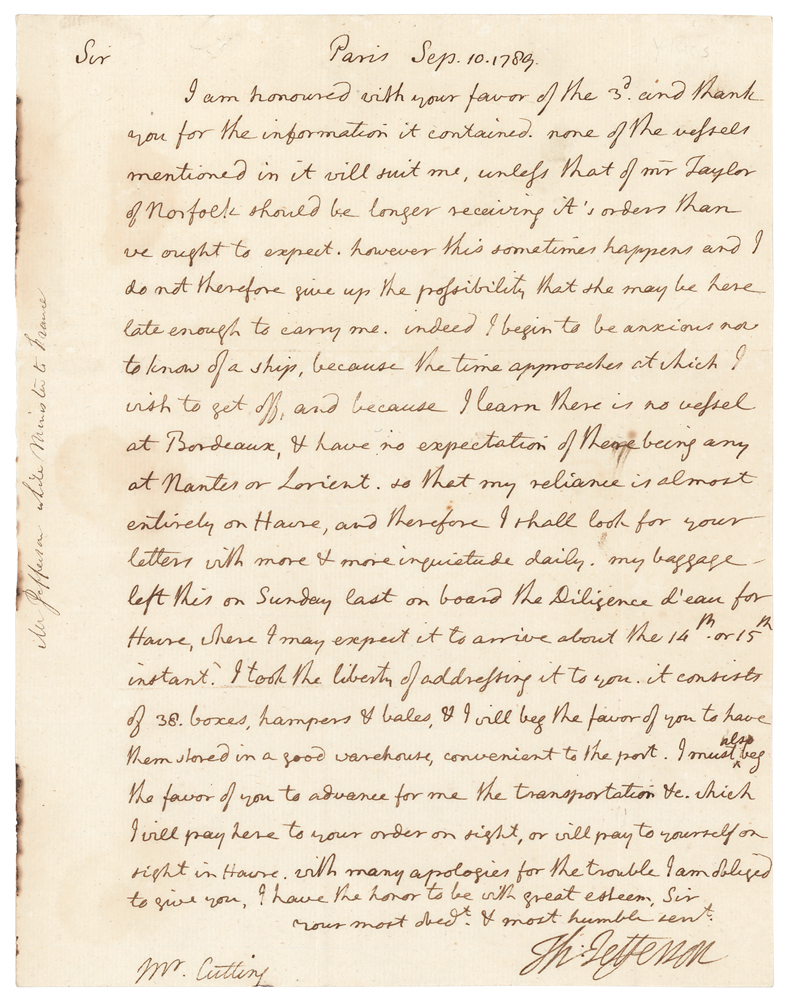 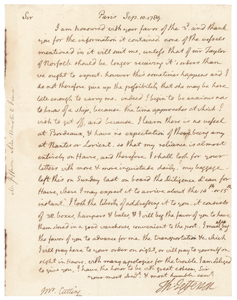 ALS signed “Th: Jefferson,” one page, 7.25 x 9.25, September 10, 1789. Letter to Nathaniel Cutting, a merchant who had been captured while commanding an American sailing vessel during the Revolutionary War; taken to England, he escaped and fled to France, where he remained for many years. Cutting helped to arrange Jefferson's return trip to the United States upon the conclusion of his four years' service as US minister to France, the subject of this letter.

In part: "I am honoured with your favor of the 3d. and thank you for the information it contained. None of the vessels mentioned in it will suit me, unless that of Mr. Taylor of Norfolk should be longer receiving it’s orders than we ought to expect. However this sometimes happens and I do not therefore give up the possibility that she may be here late enough to carry me. Indeed I begin to be anxious now to know of a ship, because the time approaches at which I wish to get off, and because I learn there is no vessel at Bordeaux, and have no expectation of there being any at Nantes or Lorient, so that my reliance is almost entirely on Havre, and therefore I shall look for your letters with more and more inquietude daily. My baggage left this on Sunday last on board the Diligence d’eau for Havre, where I may expect it to arrive about the 14th. or 15th. instant. I took the liberty of addressing it to you. It consists of 38. boxes, hampers and bales, and I will beg the favor of you to have them stored in a good warehouse, convenient to the port. I must also beg the favor of you to advance for me the transportation &c. which I will pay here to your order on sight, or will pay to yourself on sight in Havre." In fine condition, with a few faint circular stains, and light show-through at the top of the left edge from an old mounting remnant on the back. Accompanied by an engraved portrait of Jefferson featuring a facsimile signature.

In 1784, Jefferson was sent by the Congress of the Confederation to join Benjamin Franklin and John Adams in Paris to negotiate treaties of amity and commerce with the European powers. Less than a year later, he was assigned as Franklin's successor as minister to France. During his five years in Paris, Jefferson played a leading role in shaping the foreign policy of the newly formed United States. Upon his return to the America, President George Washington appointed him as Secretary of State.