Amidst the Trent Affair in 1861, President Lincoln directs his Secretary of State to meet with a British Army lieutenant—an autograph once owned by self-improvement author Dale Carnegie 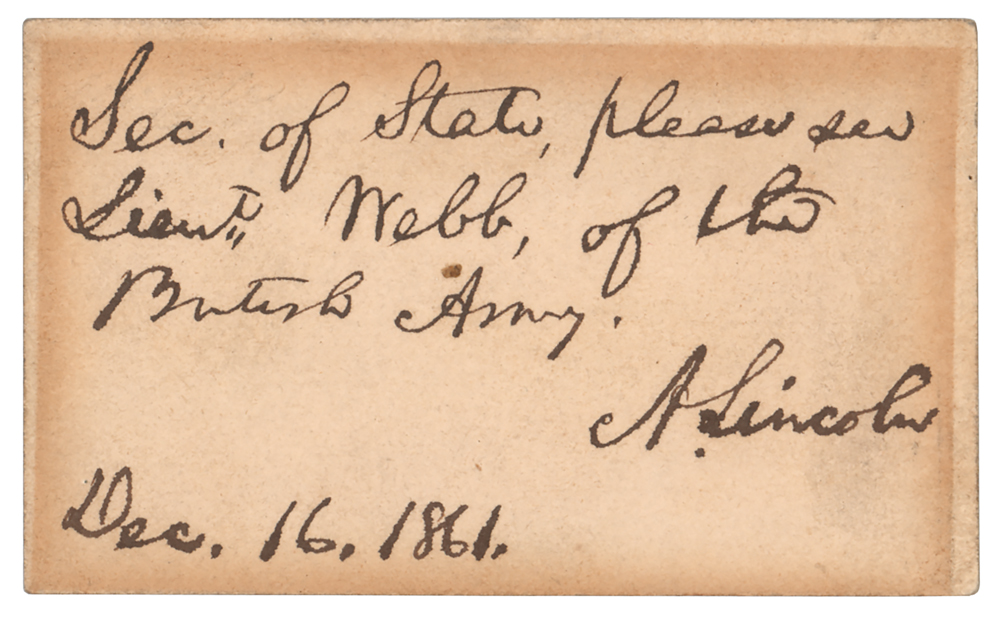 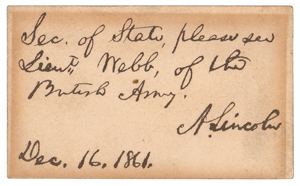 Amidst the Trent Affair in 1861, President Lincoln directs his Secretary of State to meet with a British Army lieutenant—an autograph once owned by self-improvement author Dale Carnegie

ANS as president, "A. Lincoln," on an off-white 3.25 x 2 card, December 16, 1861. Handwritten note to Secretary of State William Seward, in full: "Sec. of State, please see Lieut. Webb, of the British Army." In fine condition, with toning from prior display, old mounting remnants on the back, and a barely visible collector's embossed stamp "Robt Cole" at top left. This note is published in The Collected Works of Abraham Lincoln, Volume 5, noting that it was owned by famous self-improvement writer Dale Carnegie, who authored the biography 'Lincoln the Unknown.'

The Lieutenant Webb mentioned has not been identified, but was presumably interested in military or diplomatic matters amidst the Civil War's so-called 'Trent Affair.' Tensions were high between the United States and Great Britain: a month earlier, the USS San Jacinto, commanded by Union Captain Charles Wilkes, had captured the British mail packet RMS Trent and removed, as contraband of war, two Confederate diplomats who were en route to England and France to press the Confederacy's case for diplomatic recognition and to lobby for financial and military support. Lincoln feared war with Great Britain and aimed to resolve the matter through diplomacy, leaning on Secretary of State William Seward to handle the crisis. In late December, the United States released the envoys and disavowed Captain Wilkes's actions, but did not issue a formal apology. Through Lincoln's cool-headedness and Seward's artful statesmanship, the Union managed to avert war with Great Britain while dealing a blow to the Confederacy's diplomatic efforts in Europe.