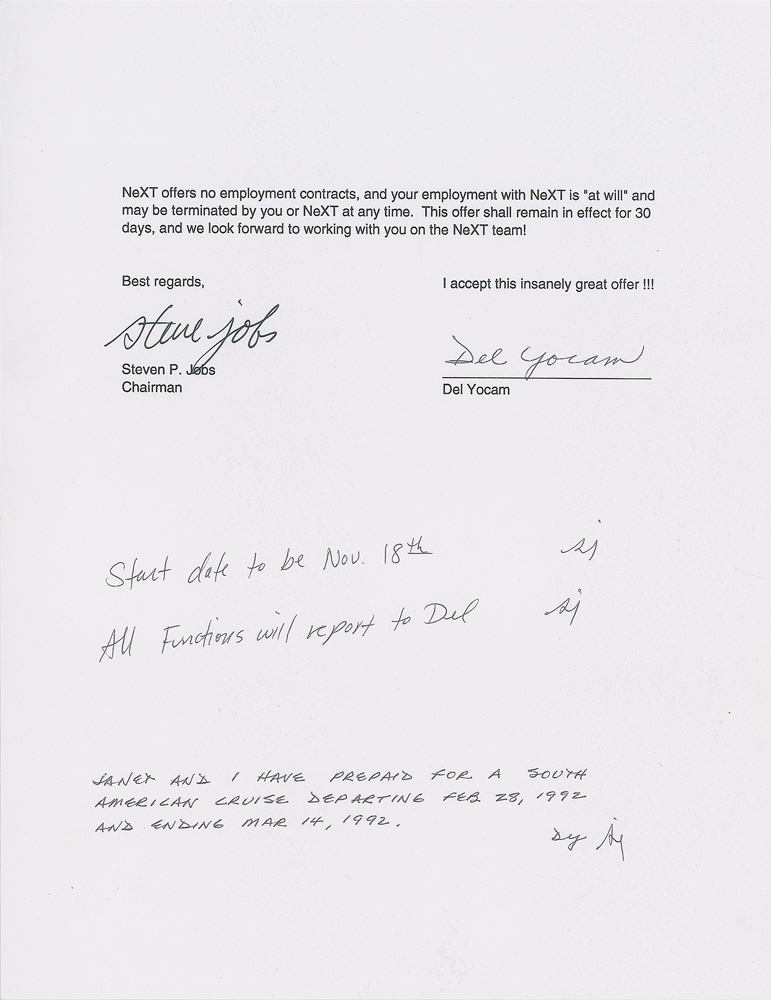 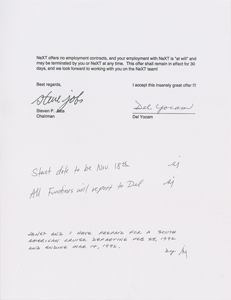 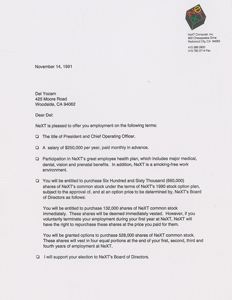 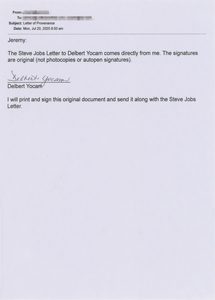 Exceedingly rare TLS signed “steve jobs,” two pages, 8.5 x 11, NeXT letterhead, November 14, 1991. Letter to Del Yocam, former COO of Apple who was then serving on the board of directors at Adobe Systems. In part: "NeXT is pleased to offer you employment on the following terms: - The title of President of Chief Operating Officer. - A salary of $250,000 per year, paid monthly in advance. - Participation in NeXT's great employee health plan, which includes major medical, dental, vision and prenatal benefits. In addition, NeXT is a smoking-free work environment. - You will be entitled to purchase Six Hundred and Sixty Thousand (660,000) shares of NeXT's common stock under the terms of NeXT's 1990 stock option plan… - I will support your election to NeXT's Board of Directors. NeXT offers no employment contracts, and your employment with NeXT is 'at will' and may be terminated by you or NeXT at any time." Above the signature line is typed: "I accept this insanely great offer !!!"—"insanely great" being a famous Jobs-ism used to introduce the Macintosh. The offer letter is signed at the conclusion by both Jobs and Yocam, with Jobs adding two handwritten amendments—"Start date to be Nov. 18th" and "All Functions will report to Del"—both initialed "sj." Jobs also initials a handwritten statement by Yocam, "Janet and I have prepaid for a South American cruise departing Feb. 28, 1992, and ending Mar 14, 1992." In very fine condition. Letters signed by Jobs are incredibly rare—we find none in auction records.

Despite signing this job offer, Yocam never served as NeXT Corporation's COO and retained the offer letter. In personal correspondence, Yocam recalled: "Steve got married to Laurene Powell March 18, 1991, and he was attempting to determine if he could back off of the overwhelming time he was spending at NeXT. I got a call from Steve shortly after he was married. He spent the next 6+ months wining and dining me in an attempt to get me to come to NeXT as President and COO. I was at NeXT many times interviewing with his Executive Staff, all of which I had known from Apple. They were desperate for me to come as Steve was driving them crazy. He was constantly changing the specifications for the NeXT computer and NeXTstep operating environment. I had joined the Board of Adobe Systems early in 1991 and actually spent 18 years on the Board of Adobe. So it was during this time that Steve was after me. I was at his home 4-6 times and out to dinner with Steve many many times. The actual offer letter didn't come until November 14, 1991. By that time, I had become concerned that even if I joined as President and COO, Steve wouldn't back off and allow me to run the company. (I even had him write in the offer letter that 'all functions would report to Del.') Additionally, I was in discussions with Larry Ellison of Oracle to join his Board of Directors, which I actually did early in 1992…I think it was ultimately all of the time Steve and I had spent at Apple and his absolute control of his environment that kept me from joining him at NeXT." Accompanied by a brief signed provenance statement from Yocam.