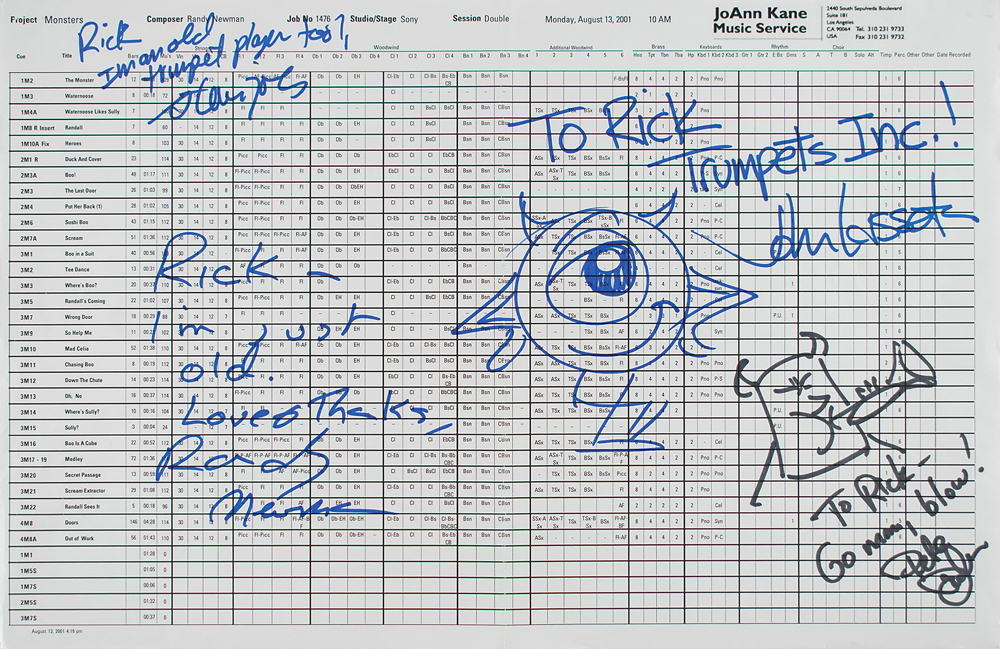 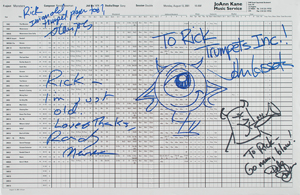 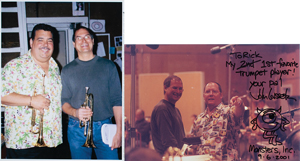 Included with the cue sheet is a color glossy 12 x 8 photo of Jobs and Lasseter standing together in a Sony studio, signed and inscribed in black felt tip, “To Rick, My 2nd [struck through] 1st favorite trumpet player! Your pal, John Lasseter, Monster, Inc., 9-6-2001,” with an added sketch of Wazowski. The recipient, Rick Baptist, is an acclaimed trumpet player who has performed on over 1,300 motion pictures, which includes numerous Pixar and Disney animated films like Toy Story, Up, Wreck-It Ralph, WALL·E, Aladdin, The Nightmare Before Christmas, and many, many more.

Accompanied by a color 8 x 10 photo of Baptist standing with Jobs at the time of signing, which shows Jobs holding the offered Monsters, Inc. cue sheet, and by a letter of provenance from Baptist, which reads: “When we arrived at the MGM scoring stage to record music for the new Pixar movie Monsters, Inc. for Randy Newman, John Lasseter came back to the brass section and said, ‘Guys I would like you to meet our CEO Steve Jobs.’ Steve was very personable and had questions about have we played on other Pixar movies and I said ‘Yes, all of them so far.’

He then said he used to play trumpet in junior high and high school. I looked around and Randy was doing something with the string section so I gave him my cornet and said, ‘See if you could play it again.’ He smiled and took the instrument, buzzed his lips and played a C scale. He gave it back to me and said, ‘Gee I am glad I don’t do this anymore.’ I cracked him up when I said, ‘So are we.’

He stayed hanging around with us brass guys as we recorded some cues, asking few questions about the music and such. I got very bold and asked him if he would sign the cue sheet for me. I gave him a blue sharpie to sign, which he very graciously did. I then asked him for a quick photo holding my cornet and had one of my fellow brass players take the photo of the two of us. As you can see, he is holding the cue sheet that he just signed. I took one more photo as he said goodbye to the brass section along with John Lasseter. The next day I had John sign that photo and I remembered saying to him, ‘Steve was such a nice cool guy.’ John said, ‘Well, you wouldn’t want to sit across the table from him in negotiations.’