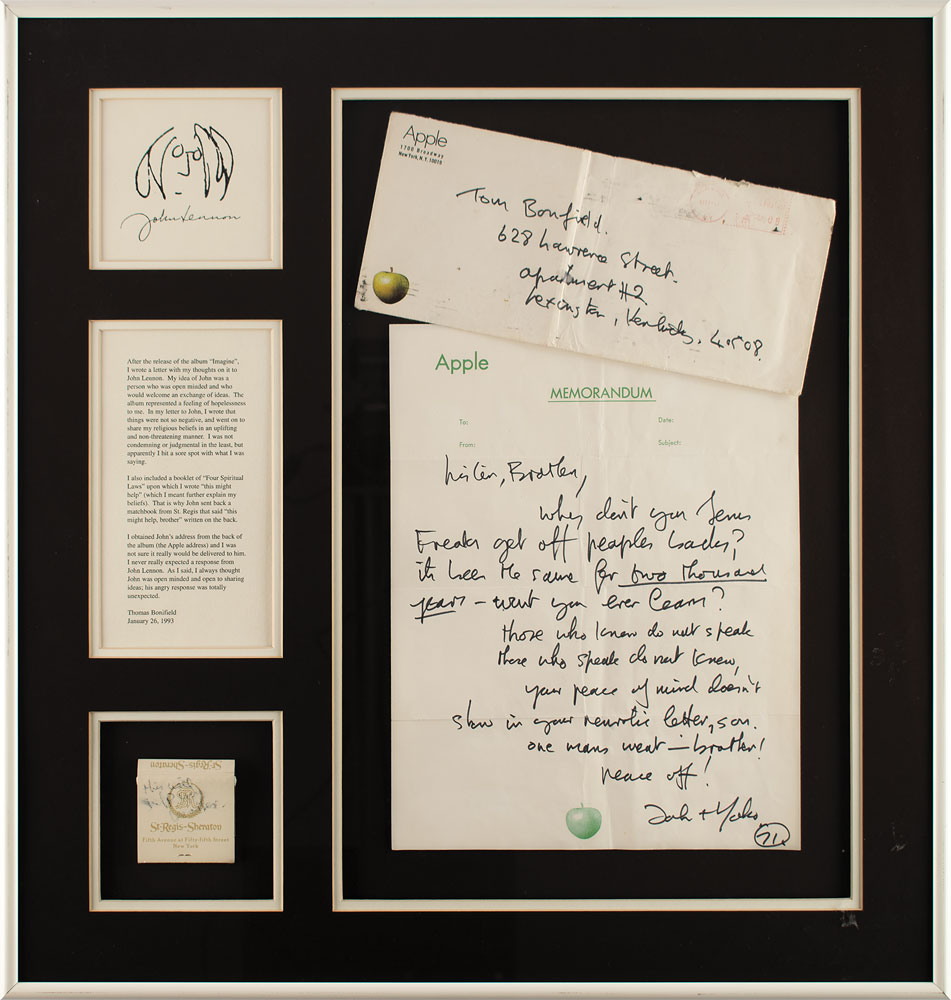 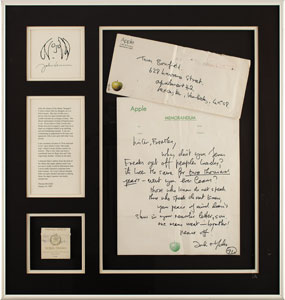 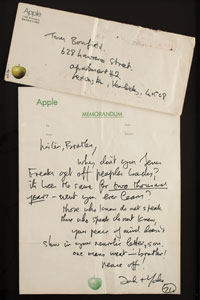 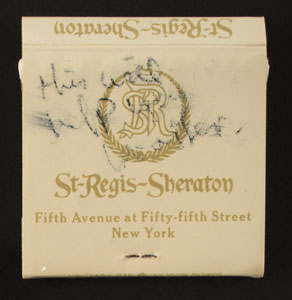 ALS signed “John & Yoko, 71,” one page, 8.5 x 11, Apple letterhead, October 1, 1971. Letter to Tom Bonfield, in full (spelling and grammar retained): "Listen, Brother, Why don't you Jesus Freaks get off peoples backs? its been the same for two thousand years—wont you ever learn? those who know do not speak, those who speak do not know, your peace of mind doesn't show in your neurotic letter, son. One mans meat—brother! Peace off!" Also included is a matchbook from the St. Regis-Sheraton in New York, the residence of Lennon and Ono, which is annotated in black ink by Lennon, "this will help brother," and the original Apple mailing envelope, which Lennon has addressed in his own hand. All of which are double-matted with a Lennon sketch logo (with facsimile autograph) and a printed letter of provenance from the original recipient, in part: "After the release of the album 'Imagine,' I wrote a letter with my thoughts on it to John Lennon…I wrote that things were not so negative, and went on to share my religious beliefs in an uplifting and non-threatening manner…I apparently hit a sore spot with what I was saying. I also included a booklet of 'Four Spiritual Laws' upon which I wrote 'this might help'…That is why John sent back a matchbook from St. Regis…I always thought John was open minded and open to sharing his ideas; his angry response was totally unexpected." Archivally framed to an overall size of 19.75 x 20.5. In very good to fine condition, with intersecting folds and light creasing.

Lennon made no bones about his personal feelings towards religion or, more specifically, Christianity, during his lifetime, with his most notorious remark published in an Evening Standard interview in March 1966—'Christianity will go. It will vanish and shrink. I needn't argue about that; I'm right and I'll be proved right. We're more popular than Jesus now; I don't know which will go first—rock 'n' roll or Christianity. Jesus was all right but his disciples were thick and ordinary. It's them twisting it that ruins it for me.' Despite no immediate outrage, Lennon's words eventually caught wind and an anti-Beatles backlash ensued. The events alarmed former Beatles press officer Derek Taylor, who was later quoted as saying 'I'm seriously worried about someone with a rifle. After all, there's no Kennedy anymore; but you can always shoot John Lennon.' The 'More popular than Jesus' quote, in addition to the songs 'God' and 'Imagine,' compelled "Jesus Freak" Mark David Chapman to kill Lennon on the streets of Manhattan on December 8, 1980. This remarkable letter can be found on page 230 in The John Lennon Letters, edited by Hunter Davies.