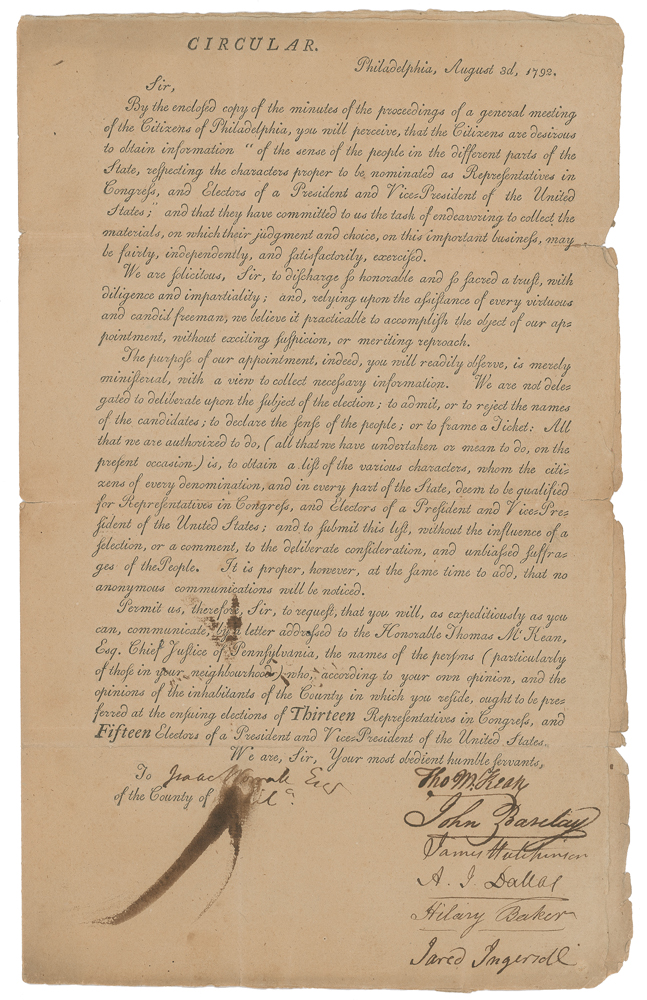 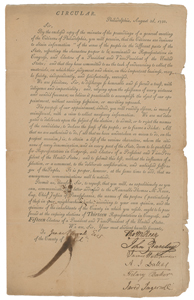 Printed circular letter signed by Thomas McKean, John Barclay, James Hutchinson, Alexander J. Dallas, Hilary Baker, and Jared Ingersoll, one page, 8.25 x 13.25, August 3, 1799. A fascinating letter seeking nominations for members of Congress and presidential electors from Pennsylvania, in part: "By the enclosed copy of the minutes of the proceedings of a general meeting of the Citizens of Philadelphia, you will perceive, that the Citizens are desirous to obtain information ‘of the sense of the people in the different parts of the State, respecting the characters proper to be nominated as Representatives in Congress, and Electors of a President and Vice-President of the United States’; and they have committed to us the task of endeavoring to collect the materials, on which their judgment and choice, on this important business, may be fairly, independently, and satisfactorily, exercised.”

“All that we are authorized to do, (all that we have undertaken or mean to do, on the present occasion) is, to obtain a list of the various characters, whom the citizens of every denomination, and in every part of the State, deem to be qualified for Representatives in Congress, and Electors of a President and Vice-President of the United States; and to submit this list, without the influence of a selection, or a comment, to the deliberate consideration, and unbiased suffrages of the People.”

“Permit us, therefore, Sir, to request, that you will, as expeditiously as you can, communicate, by a letter addressed to the Honorable Thomas McKean, Esq. Chief Justice of Pennsylvania, the names of the persons (particularly of those in your neighbourhood) who, according to your own opinion, and the opinions of the inhabitants of the County in which you reside, ought to be preferred at the ensuing elections of Thirteen Representatives in Congress, and Fifteen Electors of a President and Vice-President of the United States.”" In very good to fine condition, with small splits to horizontal folds.

McKean (1734-1817) was a signer of the Declaration of Independence from Delaware who later served as president of the Continental Congress, Chief Justice of Pennsylvania, and Governor of Pennsylvania.

Barclay (1749-1824) was an Irish immigrant who served in the Continental Army, and later became mayor of Philadelphia.

Hutchinson (1752-1793) was a noted surgeon and volunteer soldier in the Revolutionary War.

Dallas (1759-1817) was an important statesman who served as Secretary of the Treasury under James Madison.

Baker (1746-1798) served as a member of the Pennsylvania Constitutional Convention of 1787, and later became Philadelphia's mayor.

Ingersoll (1749-1822) was a signer of the US Constitution from Pennsylvania who also ran unsuccessfully as the Federalist vice-presidential candidate in the 1812 election.