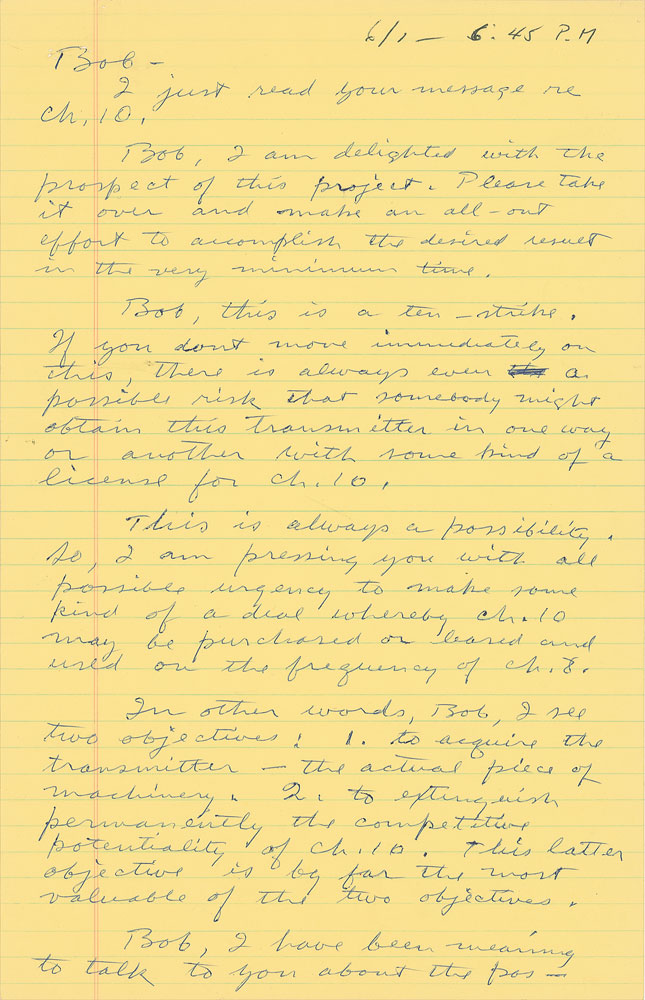 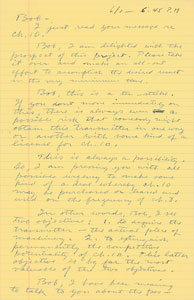 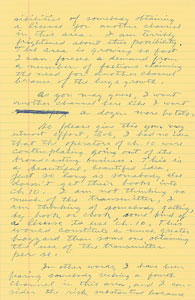 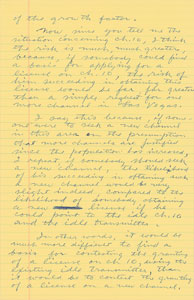 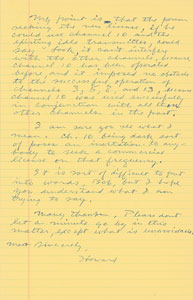 ALS signed “Howard,” four pages, 8.5 x 13.25, June 1, no year. Letter to his assistant, confidant, and former FBI agent, Robert "Bob" Maheu, in part: "Bob, I am delighted with the prospect of this project. Please take it over and make an all-out effort to accomplish the desired result in the very minimum time. Bob, this is a ten-strike. If you don't move immediately on this, there is always even a possible risk that somebody might obtain this transmitter in one way or another with some kind of a license for Ch. 10. This is always a possibility. So, I am pressing you with all possible urgency to make some kind of a deal whereby Ch. 10 may be purchased or leased and used on the frequency of Ch. 8. In other words, Bob, I see two objectives: 1. to acquire the transmitter—the actual piece of machinery. 2. to extinguish permanently the competitive potentiality of Ch. 10. This latter objective is by far the most valuable of the two objectives. Bob, I have been meaning to talk to you about the possibilities of somebody obtaining a license for another channel in this area. I am terribly frightened about this possibility. The area is growing so fast I can foresee a demand from a number of factions claiming the need for another channel because of the huge growth. As you may guess, I want another channel here like I want a dozen more hotels. So please give this your very utmost effort, Bob, I had no idea that the operators of Ch. 10 were contemplating going out of the broadcasting business. This is a beautiful, beautiful idea, just so long as somebody else doesn't get their hooks into Ch. 10. I am not thinking so much of the transmitter, I am thinking of somebody getting by hook or crook, some kind of a license to use Ch. 10. This would constitute a much greater hazard then some one obtaining the use of the transmitter per se. In other words, I have been fearing somebody seeking a fourth channel in this area, and I consider the risk substantial because of the growth factor." In fine condition, with staple holes to the upper left corner. Despite having never met face-to-face, Maheu was one of Hughes's closest aides and trusted advisor's during the 1960's. Most significantly, Maheu shielded Hughes from the public and orchestrated the deals that made the reclusive billionaire a Las Vegas power player during the city's critical development period. A fantastic letter that expresses Hughes's intense desire to obtain the Channel 10 network while eliminating all "competitive potentiality"—Hughes added several local television stations to his holdings in an attempt to further glamorize the city.