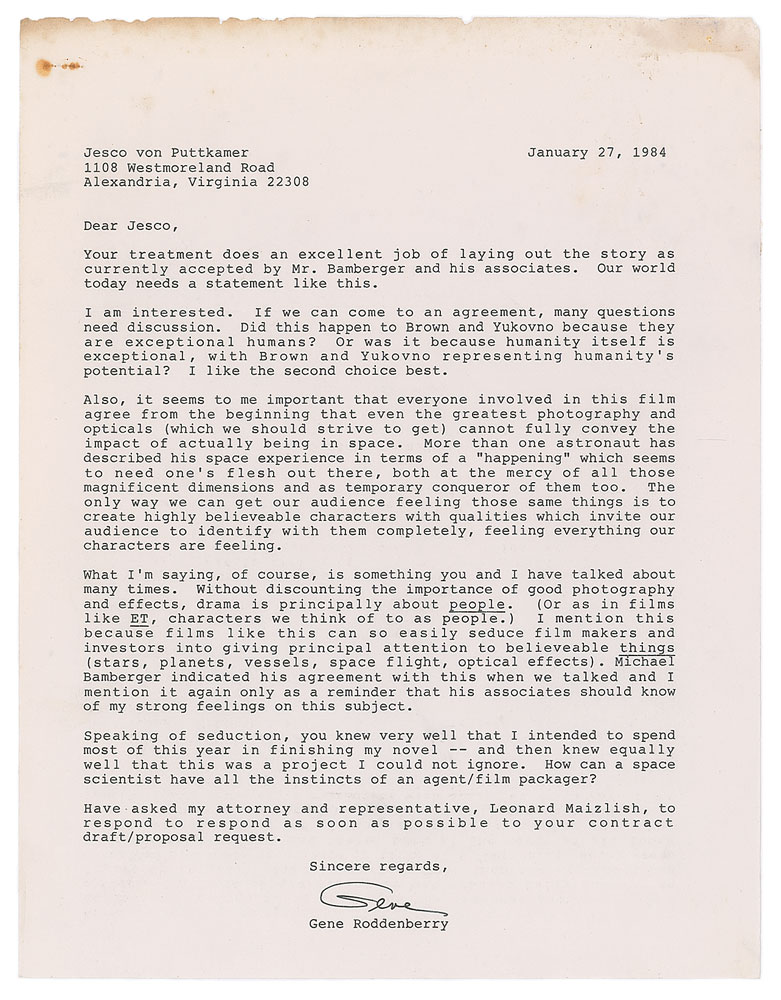 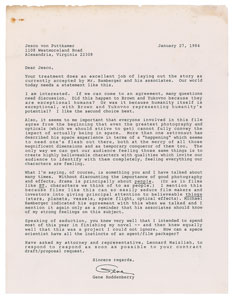 TLS signed “Gene,” one page, 8.5 x 11, January 27, 1984. Letter to noted rocket scientist Jesco von Puttkamer, offering his views on Puttkamer’s draft script for a film called "The Peacemakers," a project that he hopes for Roddenberry's collaboration. In part: "Your treatment does an excellent job of laying out the story as currently accepted by Mr. Bamberger and his associates. Our world today needs a statement like this. I am interested. If we can come to an agreement, many questions need discussion…Also, it seems to me important that everyone involved in this film agree from the beginning that even the greatest photography and opticals (which we should strive to get) cannot convey the impact of actually being in space. More than one astronaut has described his space experience in terms of a 'happening' which seems to need one’s flesh out there, both at the mercy of all those magnificent dimensions and as temporary conqueror of them too…What I’m saying, of course, is something you and I have talked about many times. Without discounting the importance of good photography and effects, drama is principally about people. (Or as in films like ET, characters we think of to as people). I mention this because films like this can so easily seduce film makers and investors into giving principal attention to believable things (stars, planets, vessels, space flight, optical effects). Michael Bamberger indicated his agreement with this when we talked and I mention it again only as a reminder that his associates should know of my strong feelings on this subject. Speaking of seduction, you knew very well that I intended to spend most of this year in finishing my novel—and then knew equally well that this was a project I could not ignore. How can a space scientist have all the instincts of an agent/film packer? Have asked my attorney and representative, Leonard Maizlish, to respond…as soon as possible to your contract draft/proposal request." Included with the letter is Puttkamer's 18-page draft treatment of "The Peacemakers." In fine condition, with rusty staple holes, and some light wear to the top edge. Accompanied by a photocopy of Roddenberry's letter.

Jesco von Puttkamer (1933-2012) earned a degree in mechanical engineering at Aachen Germany before Werner von Braun brought him to Huntsville, Alabama in 1962, to work at the Marshall Space Flight Center as an engineer and program manager in charge of long-range planning of deep-space flights. Puttkamer was an ardent advocate of manned space exploration and SETI, the search for extraterrestrial intelligence. He worked with von Braun on the Saturn V rocket, which was used in the first moon landing of Apollo 11, and in 1974 he transferred to NASA Headquarters in Washington and became a technical manager for the International Space Station. Also a science fiction writer, Puttkamer served as the technical advisor for Star Trek: The Motion Picture in 1979, and his novelette, The Sleeping God, was included in an anthology of works based on the series, Star Trek: The New Voyages 2.