"I flew the day before Sputnik!"—Duke's first flight log from USAF training 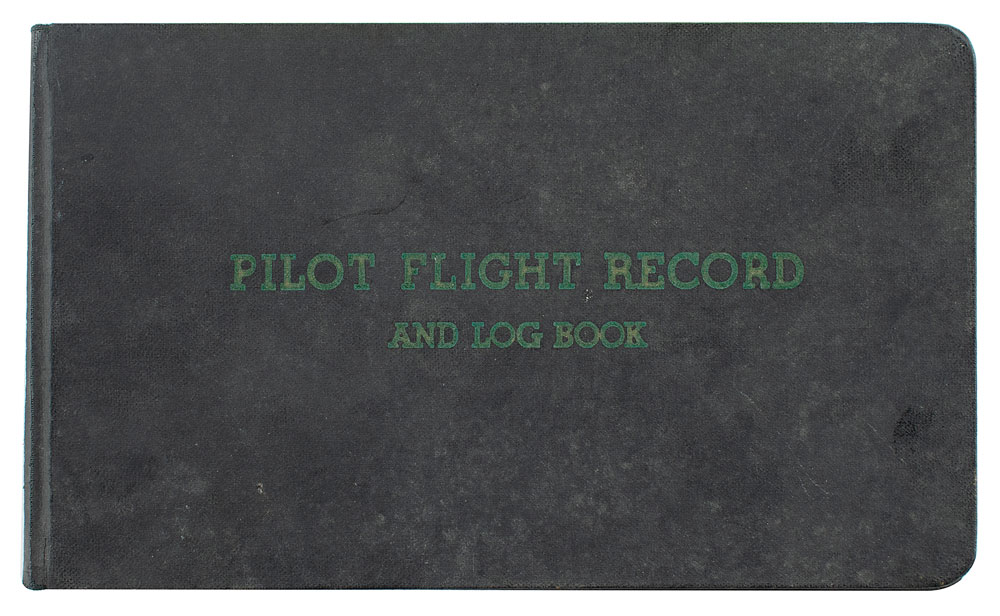 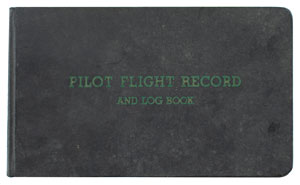 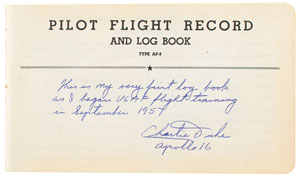 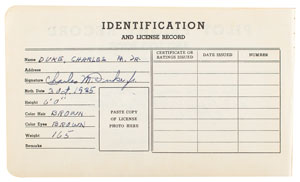 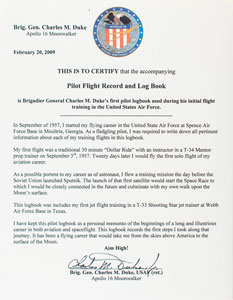 "I flew the day before Sputnik!"—Duke's first flight log from USAF training

Charlie Duke's first United States Air Force pilot logbook, 7.25 x 4.25, signed on the first page in blue ballpoint, "This is my very first log book as I began USAF flight training in September 1957, Charlie Duke, Apollo 16." On the "Identification" page, Duke filled out his name and signature ("Duke, Charles M. Jr.," and "Charles M. Duke, Jr."), and personal information including birth date ("3 Oct. 1935"), height ("6´ 0″"), eye and hair color ("Brown"), and weight ("165"). In addition to all of Duke's original entries logging flights from September 3, 1957, through September 17, 1958, he has gone through and added annotations to describe flights of special significance, signing again in each instance: "My very first flight in an U.S. Air Force Aircraft, Charles M. Duke, Jr.," "I flew the day before Sputnik!, Charles M. Duke, Jr.," "My very first solo in a U.S. Air Force jet, Charles M. Duke, Jr.," and "I received my USAF pilot wings after this flight, Charles M. Duke, Jr." During the first part of his training, Duke flew the propellor-driven T-34 Mentor and T-28 Trojan, followed by training on the T-33 Shooting Star jet at Webb Air Force Base. After receiving his USAF pilot wings, he chose to become a fighter pilot and was stationed at the Ramstein Air Base in West Germany—the front lines of the Cold War—as part of the 526th Fighter-Interceptor Squadron. In fine condition.

Accompanied by a signed letter of provenance from Duke, in part: "In September of 1957, I started my flying career in the United States Air Force at Spence Air Force Base in Moultrie, Georgia. As a fledgling pilot, I was required to write down all pertinent information about each of my training flights in this logbook. My first flight was a traditional 30 minute 'Dollar Ride' with an instructor in a T-34 Mentor prop trainer on September 3rd, 1957. Twenty days later I would fly the first solo flight of my aviation career. As a possible portent to my career as an astronaut, I flew a training mission the day before the Soviet Union launched Sputnik. The launch of that first satellite would start the Space Race to which I would be closely connected in the future and culminate with my own walk upon the Moon's surface."