The earliest Edison document we have ever seen—the 21-year-old sells the rights to his first successful invention, "an improvement for telegraphs" 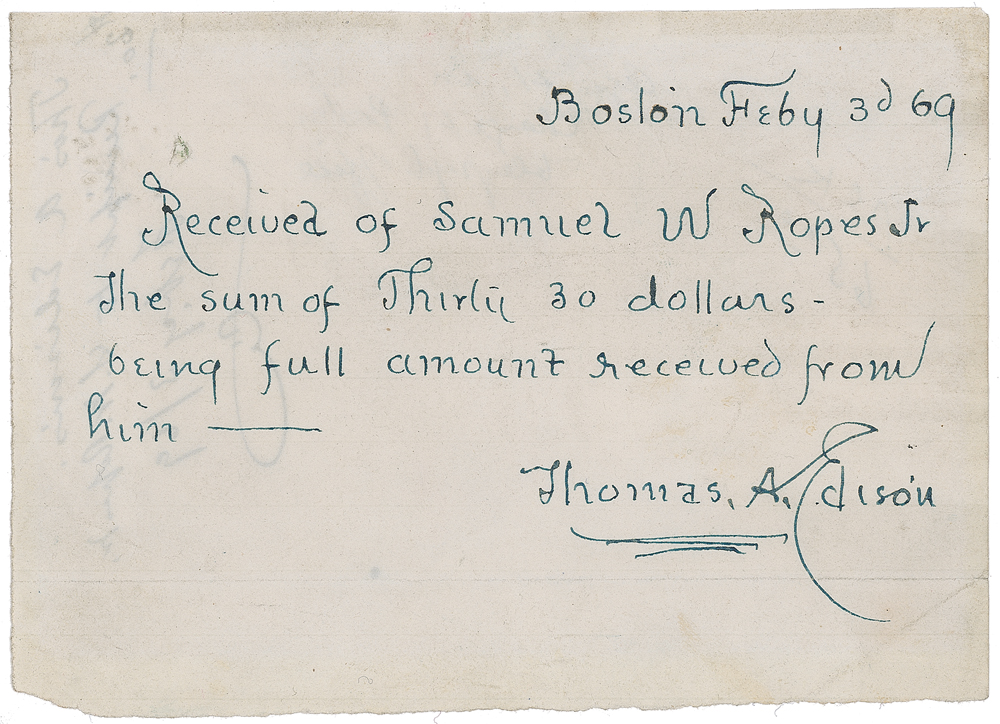 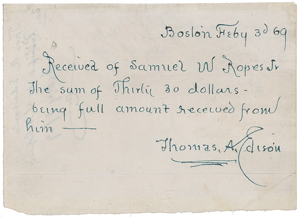 The earliest Edison document we have ever seen—the 21-year-old sells the rights to his first successful invention, "an improvement for telegraphs"

ADS, signed "Thomas A. Edison," one page, 5 x 3.5, Boston, February 3, 1869. Document related to his first successful invention, an improvement for telegraphs. In full: "Received of Samuel W. Ropes Jr the sum of Thirty 30 dollars-being full amount received from him." In fine condition, with mild soiling and expected document wear. Accompanied by copies of other documents associated with the transaction.

After saving three-year-old Jimmie MacKenzie from being struck by a runaway train, Edison was rewarded by the boy's father, a station agent, with his first job as a telegraph operator. This job set the stage for Edison's lifetime of tinkering and inspired most of his earliest projects-nearly all of his first 100 patents were related to the telegraph. The document at hand relates to Edison's second patented invention: an improvement in electro-magnetic printing telegraphs, US Patent No. 91,527, executed on January 25, 1869, and issued on June 22, 1869. On January 21, Edison sold the rights to his printing telegraph to financiers Joel Hills and William Plummer for $1300, advanced through Samuel Ropes. Hills and Plummer agreed to pay the expenses of procuring the patent, and Ropes was to be responsible for introducing it to the public and into personal use. Edison's novel device used two electromagnets, one for rotating the type wheel and one for actuating the printing hammer, enabling it to print at a receiving station without an attendant present. No power source was necessary to run the mechanism on the receiving end, as it was relayed through lines from the transmitting station. These qualities made it a very versatile instrument, designed ideally for transmitting messages from a central station to many receiving stations-a complex application for such a device would be an accurate, real-time stock ticker, which Edison went on to develop. This brief handwritten document not only represents the 21-year-old Edison's first successful invention that jump started his prolific career, but is also the earliest Edison document we have ever seen enter the marketplace.