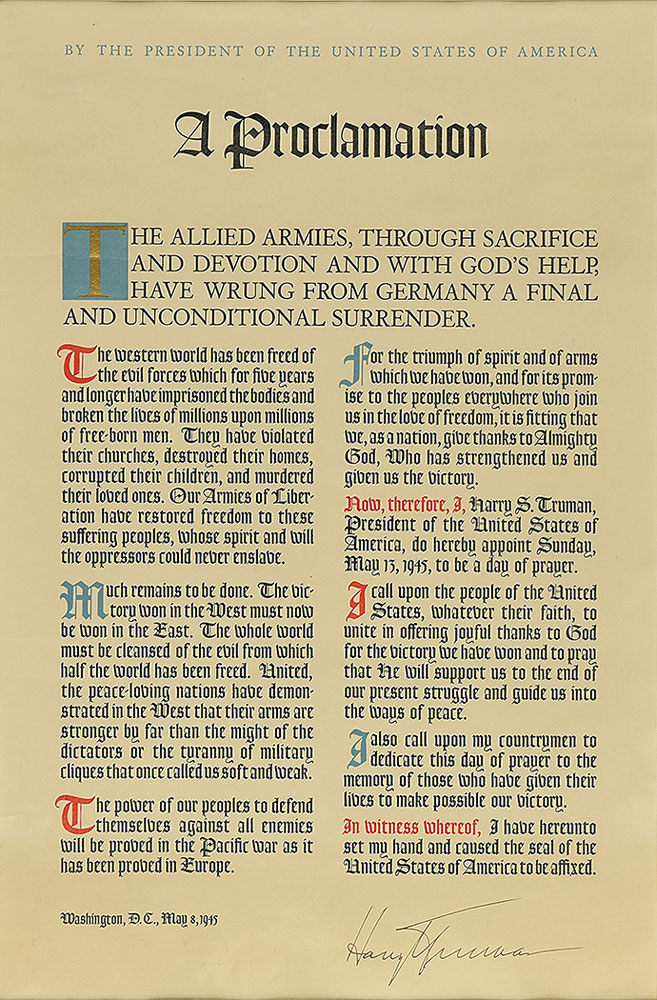 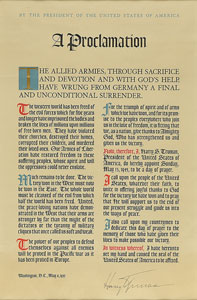 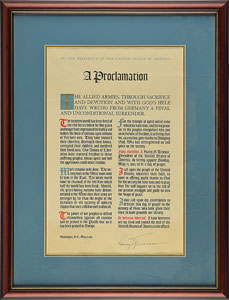 Impressive printed World War II proclamation broadside presented as a Christmas gift by President Harry S. Truman in 1945, 10.75 x 16.25, signed in the lower right corner in fountain pen, "Harry S. Truman." A stunningly decorative broadside containing President Truman's proclamation of May 8, 1945, the day following the German surrender, for a day of prayer to be celebrated on May 13, 1945. The text reads, in part: "The Allied Armies, through sacrifice and devotion and with God's help, have wrung from Germany a final and unconditional surrender. The Western World has been freed of the evil forces which for five years and longer have imprisoned the bodies and broken the lives of millions upon millions of free-born men. They have violated their churches, destroyed their homes, corrupted their children, and murdered their loved ones. Our Armies of Liberation have restored freedom to these suffering people, whose spirit and will the oppressors could never enslave. Much remains to be done. The victory won in the West must now be won in the East. The whole world must be cleansed of the evil from which half the world has been freed. United the peace-loving nations have demonstrated in the West that their arms are stronger by far than the might of the dictators or the tyranny of military cliques that once called us soft and weak…

Now, therefore, I, Harry S. Truman, President of the United States of America, do hereby appoint Sunday, May 13, 1945, to be a day of prayer. I call upon the people of the United States, whatever their faith, to unite in offering joyful thanks to God for the victory we have won and to pray that he will support us to the end of our present struggle and guide us into the ways of peace. I also call upon my countrymen to dedicate this day of prayer to the memory of those who have given their lives to make possible our victory. In witness whereof, I have hereunto set my hand and caused the seal of the United States of America to be affixed." Double-matted and framed to an overall size of 18.25 x 24. In fine condition.

On Harry S. Truman's 61st birthday, Tuesday, May 8, 1945, having only recently assumed the presidency, he held a press conference in the Oval Office to announce Germany's surrender from World War II. Before an audience of his cabinet and other dignitaries, President Truman delivered this proclamation and declared May 13, 1945, a day of prayer in honor of those who served. A simply beautiful proclamation from a hard-won day of celebration that brought one of the darkest periods of modern history to a close.