Morse deems himself an “honored instrument” of the true creator of the telegraph, “the Giver of every good and perfect gift” 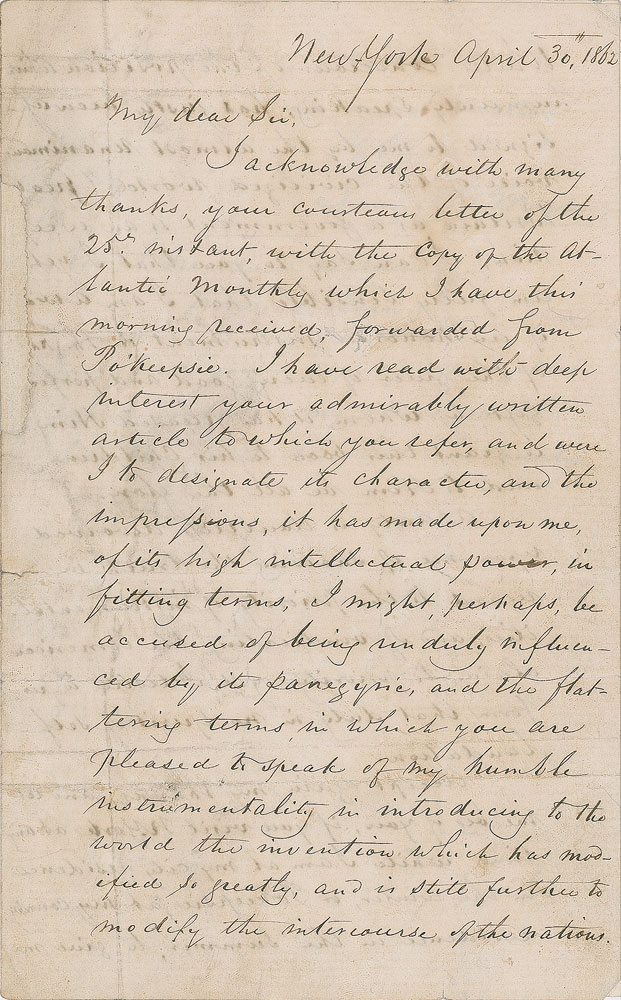 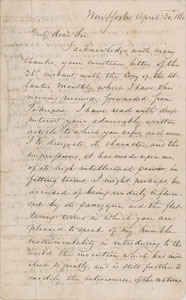 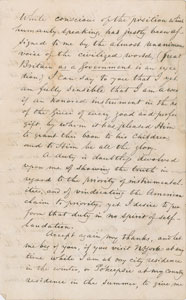 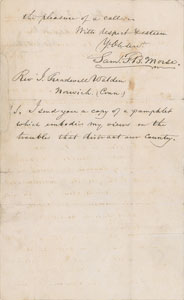 Morse deems himself an “honored instrument” of the true creator of the telegraph, “the Giver of every good and perfect gift”

ALS signed “Sam’l F. B. Morse,” three pages on two adjoining sheets, 5 x 8, April 30, 1862. Letter to Minister J. Treadwell Walden of Norwich, Connecticut. In part: “I acknowledge with many thanks, your courteous letter of the 25th instant, with the copy of the Atlantic Monthly which I have this morning received, forwarded from Po’keepsie. I have read with deep interest your admirable written article to which you refer, and were I to designate its character, and the impressions, it has made upon me, or its high intellectual power, in fitting terms, I might, perhaps, be accused of being unduly influenced by its panegyric, and the flattering terms, in which you are pleased to speak of my humble instrumentality in introducing to the world the invention which has modified so greatly, and is still further to modify the intercourse of nations. While conscious of the position which humanely speaking, has justly been assigned to me by the almost unanimous voice of the civilized world (Great Britain as a Government is an exception), I can say to you that I yet am fully sensible that I am a we[ak] if honored instrument in the han[ds] of the Giver of every good and perfec[t] gift, by whom it has pleased Him to grant this boon to his children, and to Him be all the glory. A duty is doubtless devolved upon me of showing the truth in regard to the priority of instrumentalities, and of vindicating the American claim to priority, yet I desire to perform that duty in no spirit of self-laudation…P.S. I send you a copy of a pamphlet which embodies my views on the troubles that distract our country.” In very good to fine condition, with light overall soiling, several intersecting folds, and an old repair to paper loss on the hinge, lightly affecting a few words of text.

Morse’s mention of “Great Britain as a Government is an exception” is in reference to the ongoing dispute with English inventor Charles Wheatstone, who, along with William Cooke, invented an electrical needle telegraph around the same period as Morse. In 1851, the Morse telegraphic apparatus was officially adopted as the standard for European telegraphy, with only the United Kingdom opting to employ the use of Wheatstone and Cooke’s needle telegraph. The religious subtext of the letter suitably echoes Morse’s famous first telegraph from the basement of the US Capitol on May 24, 1844—‘What hath God wrought?’