Secret pouch that carried souvenir flags, worn for 18 hours on the lunar surface 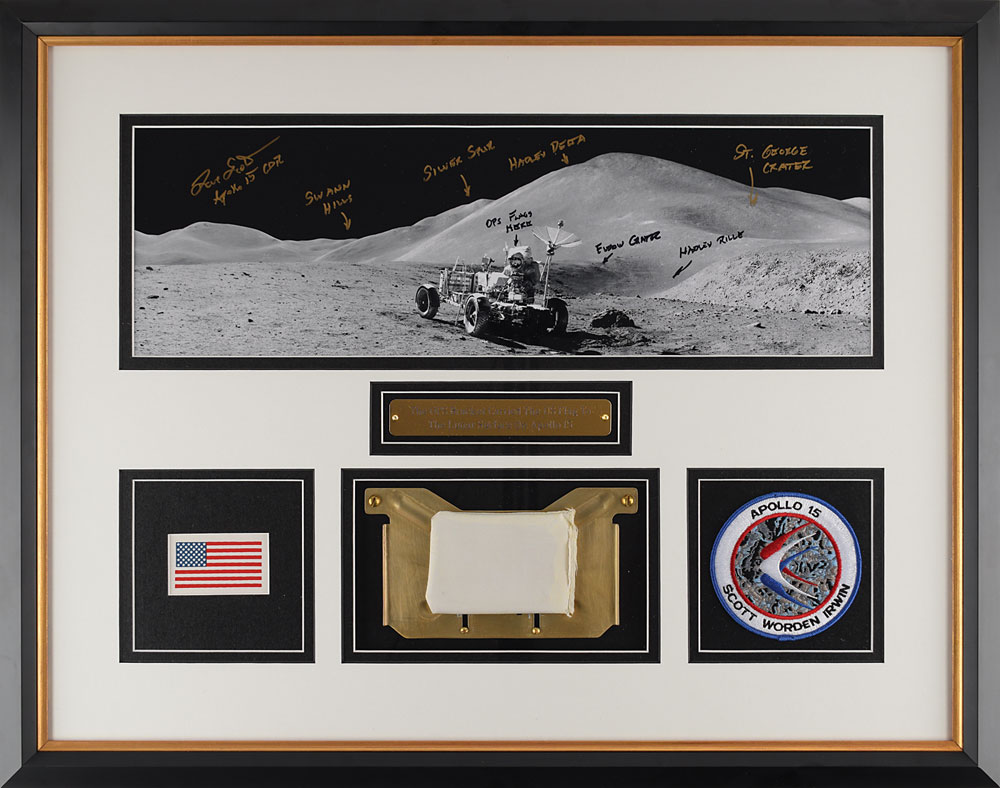 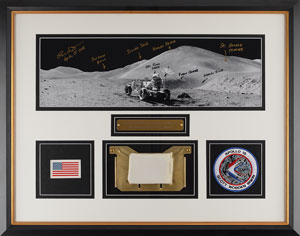 Secret pouch that carried souvenir flags, worn for 18 hours on the lunar surface

Lunar surface-used internal support bracket for the Oxygen Purge System worn by one of the Apollo 15 astronauts, 7.5 x 4, featuring a secret Beta cloth pouch glued inside which was used to carry souvenir flags during his three lunar EVAs; also includes one of the 2.75 x 1.5 Beta cloth American flags flown to the lunar surface and carried inside the pouch during the lunar EVAs. Displayed with a superb satin-finish 20 x 6.25 lunar panorama showing Dave Scott with the LRV, signed in gold ink, "Dave Scott, Apollo 15 CDR," with geological features annotated in black and gold: "Swann Hills," "Silver Spur," "Hadley Delta," "St George Crater," "Hadley Rille," and "Elbow Crater," as well as the location of the OPS behind his head, "OPS Flags Here." The three are archivally matted and framed together with a mission patch from Scott's collection and a descriptive plaque to an overall size of 27 x 21.5. In the event of PLSS (Personal Life Support System) failure, the Oxygen Purge System served as a backup air supply that could provide 30 minutes of breathing oxygen to the crewman. It was mounted on top of the PLSS backpack directly behind the astronaut’s head. In fine condition.

Accompanied by a detailed signed letter of provenance from Dave Scott, numbered 2/2, in part: “I hereby certify that the small beta-cloth US flag…was carried inside a beta-cloth package mounted on an internal structural bracket of an Apollo 15 Oxygen Purge System (OPS) for three days of EVA excursions during Apollo 15, the first extended exploration of the Moon, July 26-August 7, 1971. The OPS, including this small beta cloth US flag, was attached to the top of the Portable Life Support System (PLSS) on the lunar surface such that in the event of a PLSS failure, the OPS flow provides 30 minutes of breathing oxygen to the crewman…Several weeks after Apollo 15, this OPS Bracket and Flag Package were shown to me by NASA senior management. According to management, a member of the JSC Crew Systems Division (CSD) had prepared the flags and secretly stowed them…I was given the OPS bracket and package of flags…This small OPS flag and this OPS Internal Support Bracket have been in my personal collection since we returned from the Moon."

During their three Apollo 15 EVAs, Dave Scott and Jim Irwin logged over 18 hours on the lunar surface, traveling 17.3 miles in the Lunar Roving Vehicle. This bracket was an integral component of the OPS, which was worn any time the astronaut was outside of the Lunar Module and served as a critical piece of safety equipment for survival on the lunar surface. The story behind its unexpected use as a carrier for souvenir flags—and the inclusion of one in the display—adds to this item’s significance. A simply spectacular piece of surface-used hardware. From the personal collection of Dave Scott.