The Winning of the West, featuring the very first handwritten page from Roosevelt's manuscript for the book: "Chapter I. The Spread of the English-Speaking Peoples” 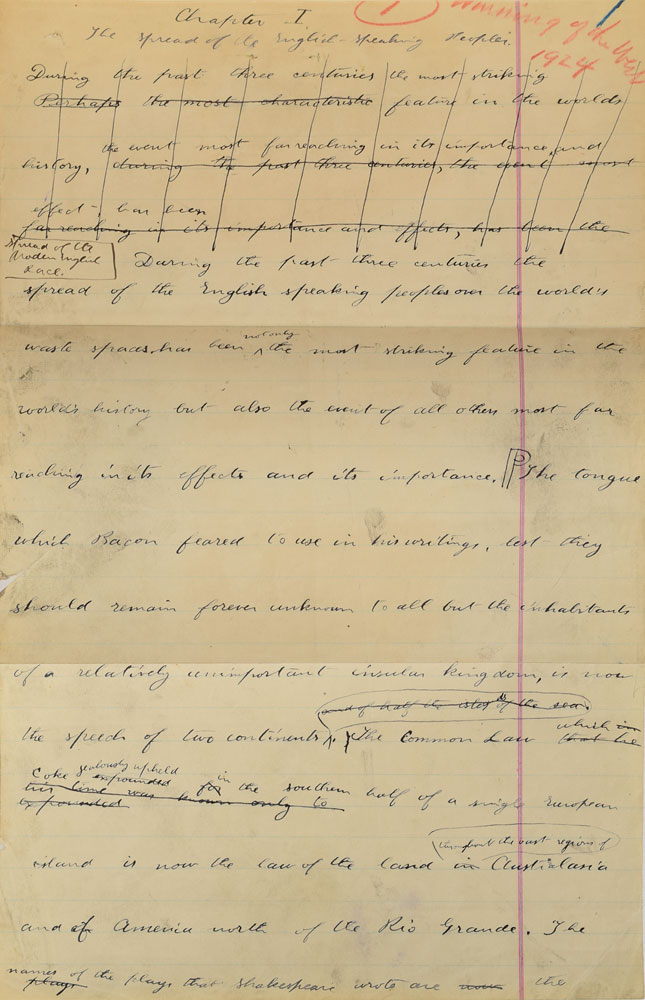 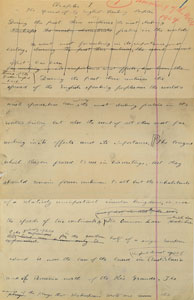 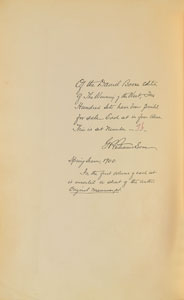 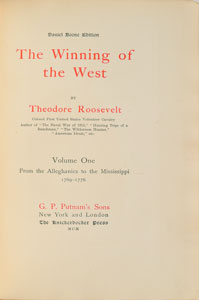 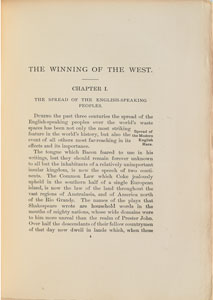 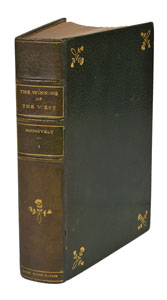 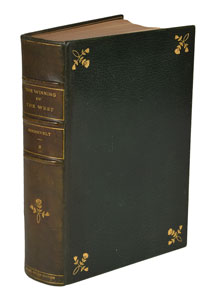 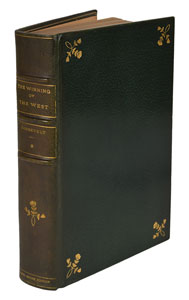 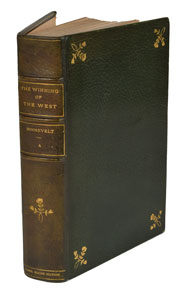 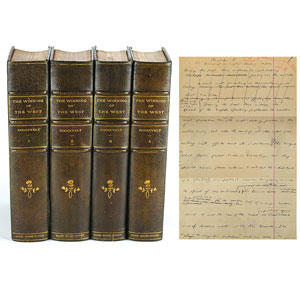 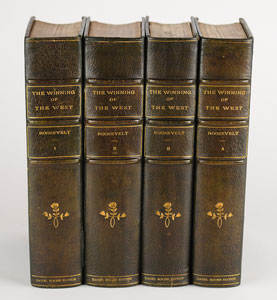 The Winning of the West, featuring the very first handwritten page from Roosevelt's manuscript for the book: "Chapter I. The Spread of the English-Speaking Peoples”

Magnificent limited edition book, containing an original handwritten manuscript leaf from Roosevelt's draft: The Winning of the West, Volumes I-IV. Daniel Boone Edition, limited issue, numbered 96/200. NY: G. P. Putnam's Sons/Knickerbocker Press, 1900. Leatherbound hardcover in original publisher’s full decorated morocco, leather doublures and suede endpapers, gilt top edges, 7.25 x 10.25. Inlaid opposite the colophon is the first page from Roosevelt's handwritten manuscript, 12.25 x 8, headed, "Chapter I. The Spread of the English-Speaking Peoples." The first few lines are struck through, and the manuscript begins in earnest: "During the past three centuries the spread of the English speaking peoples over the world's waste spaces has been not only the most striking feature in the world's history but also the event of all others most far reaching in its effects and its importance. The tongue which Bacon feared to use in his writings, lest they should remain forever unknown to all but the inhabitants of a relatively unimportant insular kingdom, is now the speech of two continents. The Common Law which Coke jealously upheld in the southern half of a single European island is now the law of the land throughout vast regions of Australasia and of America north of the Rio Grande. The names of the plays that Shakespeare wrote are [household words in the mouths of mighty nations]." Autographic condition: very good to fine, with scattered ink fingerprints and a small cut to the left edge of the manuscript page. Book condition: VG/None, with well-done minor restorations to exterior joints, and slight wear to spines; the bookplate of John Stuart Groves is affixed inside the front of each volume. An exceptionally handsome set in a deluxe binding.

An absolutely stunning special edition featuring a page from Roosevelt's handwritten draft—but for minor grammatical changes, the words penned here by Roosevelt are precisely how this hefty work opens, following a lengthy preface and foreword. Roosevelt was a prolific author, and in fact had first come to prominence as a serious historian with the two-volume work The Naval War of 1812. He turned to writing The Winning of the West, his most ambitious work, after suffering defeat in the 1886 election for mayor of New York City. Tracing the history of American westward expansion, it was first published in four volumes by G. P. Putnam's Sons between 1889 and 1896. This special 'Daniel Boone' edition was released in 1900, with Volume I in each set containing a leaf of the original draft; of the two hundred sets produced, approximately half were issued in this green full leather deluxe binding.