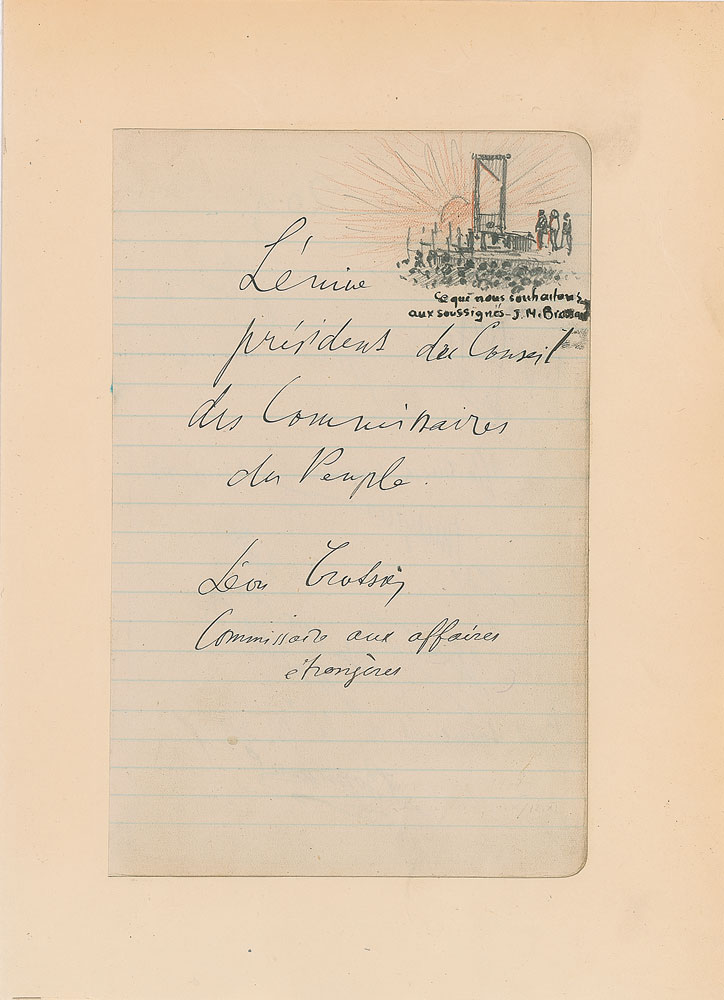 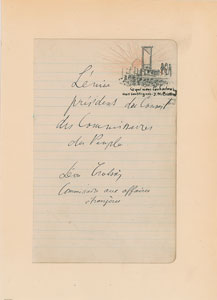 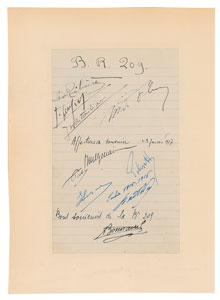 Amazingly rare combination of circa 1918 fountain pen signatures in French of Russian revolutionaries Vladimir Lenin, "Lenine, president du Conseil des Commissaires du Peuple," and Leon Trotsky, "Leon Trotsky, Commissaire aux affaires etrangeres," on a lightly-lined 4.5. x 7 off-white sheet. The upper right corner features an original contemporary pencil and crayon sketch of a guillotine by painter J. M. Brossart, the image depicting several individuals standing in a row as they face execution, signed below in ink, "Ce que nous souhaitons aux soussignés [What we wish for the undersigned]—J. M. Brossart." The reverse bears ten ink signatures of various French fighter pilots of World War I, each of them members of the Escadrille BR 209 squadron, including Leon Ribiere. Neatly inlaid into a larger off-white sheet and in fine condition. In fine condition.

The present signatures of Lenin and Trotsky were obtained shortly after the historic October Revolution, a seizure of state power instrumental in the larger Russian Revolution of 1917. It took place with an armed insurrection in Petrograd, following and capitalizing on the February Revolution of the same year, which overthrew the Tsarist autocracy. The October Revolution resulted in the power being shifted to the local Soviets in Petrograd, whom heavily supported the Bolshevik Party. After the Congress of Soviets, now the governing body, had its second session, it elected members of the Bolsheviks to key positions which immediately initiated the establishment of the Russian Socialist Federative Soviet Republic, the world's first self-proclaimed socialist state. On November 8, 1917, the Congress elected a Council of People's Commissars, with Lenin as Chairman and Trotsky as Commissar of Foreign Affairs, the positions they have added to the present signatures.

Provenance: The present signatures were removed from a notebook previously owned by Robert de Flers (1872-1927), French playwright and journalist who traveled to the Eastern front as the head of a French military mission, taking him to Romania, Moscow, and Petrograd, at which time he obtained the signatures of Lenin and Trotsky. A first hand account of Flers' travels was written by Emmanuel Chaumé (1890-1934) and published by Firmin-Didot of Paris in 1929 under the title La Belle Aventure de Robert de Flers - Russie-Romanie (Fevrier-Mars 1918). The album was subsequently passed to his nephew, the French diplomat and pilot of World War I, Viscount Amédée de Flers.