The first proclamation of Roosevelt as commander-in-chief: "The President of the United States has been struck down; a crime not only against the Chief Magistrate, but against every law-abiding and liberty-loving citizen" 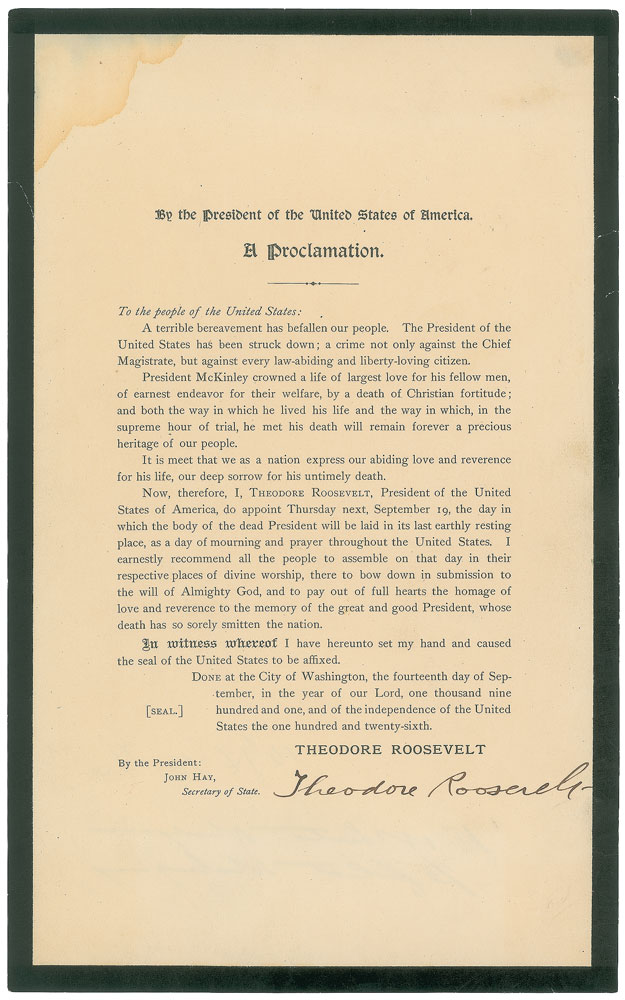 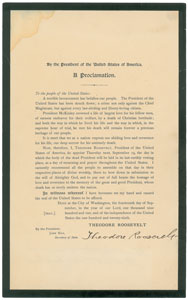 The first proclamation of Roosevelt as commander-in-chief: "The President of the United States has been struck down; a crime not only against the Chief Magistrate, but against every law-abiding and liberty-loving citizen"

Significant DS as president, one black-bordered page, 8.25 x 13.25, September 14, 1901. Official proclamation issued upon the death of President William McKinley, in full: "A terrible bereavement has befallen our people. The President of the United States has been struck down; a crime not only against the Chief Magistrate, but against every law-abiding and liberty-loving citizen. President McKinley crowned a life of largest love for his fellow men, of earnest endeavor for their welfare, by a death of Christian fortitude; and both the way in which he lived his life and the way in which, in the supreme hour of trial, he met his death will remain forever a precious heritage of our people. It is meet that we as a nation express our abiding love and reverence for his life, our deep sorrow for his untimely death. Now, Therefore, I, Theodore Roosevelt, President of the United States of America, do appoint Thursday next, September 19, the day in which the body of the dead President will be laid in its last earthly resting place, as a day of mourning and prayer throughout the United States. I earnestly recommend all the people to assemble on that day in their respective places of divine worship, there to bow down in submission to the will of Almighty God, and to pay out of full hearts the homage of love and reverence to the memory of the great and good President, whose death has so sorely smitten the nation." Signed at the conclusion by President Roosevelt. In fine condition, with a short edge tear and light stain to the upper left corner.

On September 5, 1901, President William McKinley was shot by an anarchist’s bullet at the Pan American Exposition in Buffalo, New York. Roosevelt, at the time attending a luncheon on Lake Champlain, rushed to the aid of the president, who, in the immediate days after the shooting, showed signs of recovery. Assured that the president would live, Roosevelt ventured into the Adirondacks for a family camping trip and a hike of Mount Major. On September 13, a runner brought Roosevelt the news that McKinley was quickly fading. After a series of perilous wagon rides, Roosevelt reached North Creek Station early the next morning, and was promptly handed a telegram confirming the death of McKinley. Roosevelt traveled on to Buffalo and the house of Ansley Wilcox, the location he would that afternoon take the Oath of Office. Immediately following the swearing-in, Roosevelt held a brief cabinet meeting in the Wilcox library and then proceeded to the morning room to issue this, his first presidential proclamation.