Tremendous handwritten letter from Tchaikovsky, with references to masterworks The Maid of Orleans, Symphony No. 2, and Capriccio Italien 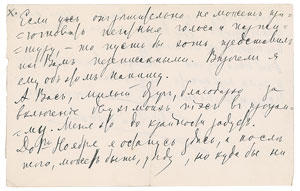 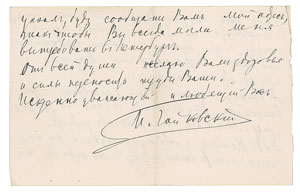 Tremendous handwritten letter from Tchaikovsky, with references to masterworks The Maid of Orleans, Symphony No. 2, and Capriccio Italien

Rare and sought-after ALS in Cyrillic, signed “P. Tchaikovsky,” six total pages, 6 x 4, September 18 [1880]. Written from the town of Kamenka, a letter to his friend Eduard Frantsevich, in full (translated): "This morning I received your letter and right away set about making alterations, required by the censorship, then I hurried to send the results of my work to Gennady Petrovich. I am very sorry, that they insist on turning the Archbishop into a Wanderer, and I am going to ask Jurgenson to go to Petersburg to solicit for allowing me to name this character Cardinal. If there is a Cardinal in La Juif, why not allow him into The Maid of Orleans as well? As to the banning of crucifixes, I had to shorten the final scene because of that.

Capriccio Italien as arrangement for four hands has already been finished, meanwhile it is also being printed as a score and solos and will be ready by November 1; at any rate, that is what Jurgenson is promising me, to whom, by the way, I am going to write, that you want to perform the piece and would like to know exactly when it is going to be ready. I think that even if Jurgenson is late, it will be by a very little.

As for the Symphony No. 2, I have to warn you that Mr. Bessel is not likely to live up to his promise to print the scores and solos in the current season; at least, I still have not received the proofs. As a matter of fact, I am quite sorry that I had dealings with this unscrupulous dealer. Meanwhile, it is impossible to perform Symphony No. 2 other than in its new form, because I destroyed the old score. Would you happen to see Mr. Bessel? If yes, be so kind as to tell him, that it is in his best interest to honestly carry out his obligations. If he is absolutely unable to prepare for you the printed solos and the score, then let him at least give you the written copies. I am going to write him about that, though.

I thank you, dear Friend, for including my two pieces into the program. This makes me extremely happy. I will remain here till November 1, and after this I might leave, but no matter where I go, I will keep you posted about my address, so that you could always summon me to Petersburg. From the bottom of my heart I wish you health and strength to cope with your work." In fine condition, with a light central vertical fold to each page.