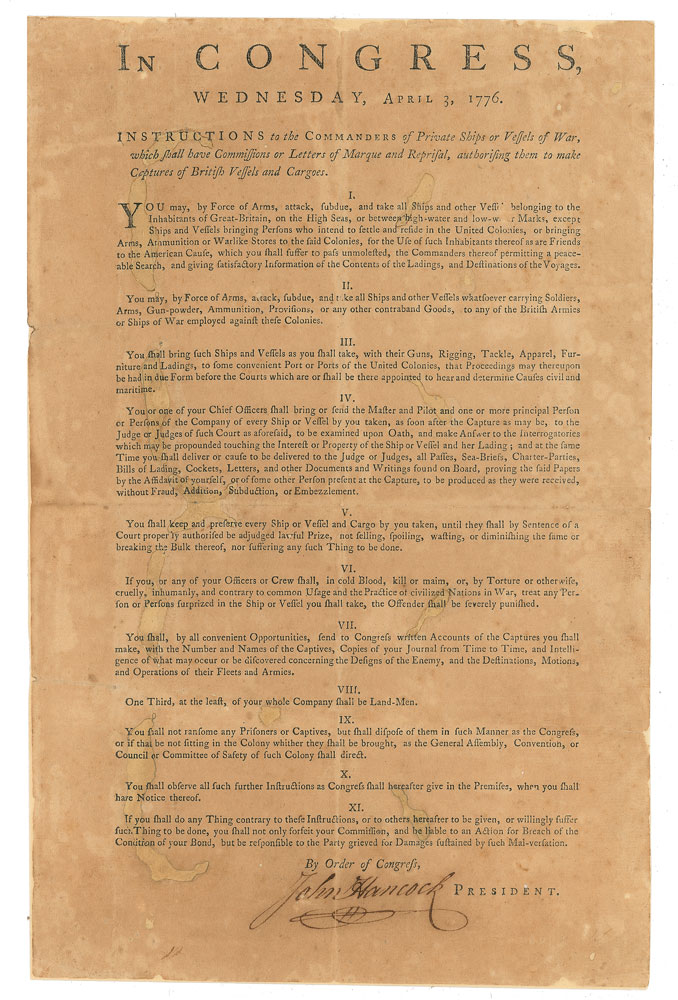 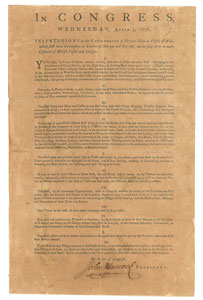 II. You may, by Force of Arms, attack, subdue, and take all Ships and other Vessels whatsoever carrying Soldiers, Arms, Gun-powder, Ammunition, Provisions, or any other contraband Goods, to any of the British Armies or Ships of War, employed against these Colonies.

III. You shall bring such Ships and Vessels as you shall take, with their Guns, Rigging, Tackle, Apparel, Furniture and Ladings, to some convenient Port or Ports of the United Colonies, that Proceedings may thereupon be had in due form, before the Courts which are or shall be there appointed to hear and determine Causes civil and maritime.

IV. You or one of your Chief Officers shall bring or send the Master and Pilot, and one or more principal Person or Persons of the Company of every Ship or Vessel by you taken, as soon after the Capture as may be, to the Judge or Judges of such Court as aforesaid, to be examined upon Oath, and make Answer to the Interrogatories which may be propounded, touching the Interest or Property of the Ship or Vessel and her Lading; and at the same Time you shall deliver or cause to be delivered to the Judge or Judges, all Passes, Sea-Briefs, Charter-Parties, Bills of Lading, Cockets, Letters, and other Documents and Writings found on Board, proving the said Papers, by the Affidavit of yourself, or of some other Person present at the Capture, to be produced as they were received, without Fraud, Addition, Subduction, or Embezzlement.

V. You shall keep and preserve every Ship or Vessel and Cargo by you taken, until they shall by Sentence of a Court properly authorized, be adjudged lawful Prize, not selling, spoiling, wasting, or diminishing the same, or breaking the Bulk thereof, nor suffering any such Thing to be done.

VI. If you, or any of your Officers or Crew shall, in cold Blood, kill or maim, or, by Torture of otherwise, cruelly, inhumanly, and contrary to common Usage and the Practice of civilized Nation in War, treat any Person or Persons surprized in the Ship or Vessel you shall take, the Offender shall be severely punished." Prominently signed at the conclusion by Hancock as president of the Continental Congress. Archivally encapsulated in mylar and in very good condition, with mottled overall staining, and several areas of professional repairs to areas affected by paper loss, as well as complete backing.

First issued by John Hancock in April 1776, this privateering proclamation was reprinted and used continually, as occasion demanded, throughout the Revolutionary War, with each example legitimized with the signature of the Congress's president. The letters of marque issued by Congress to privately owned vessels gave them the ability to operate as warships; providing instructions as to the extent of their authority, this document would have been issued with the privateer commission. Privateers peaked in 1781 with approximately 450 vessels at sea, armed with some 6,735 guns; the Continental Navy, by contrast, had only three ships in commission in 1781. During the years of the Revolution, privateers seized about 600 British vessels. A rare and historically significant document.