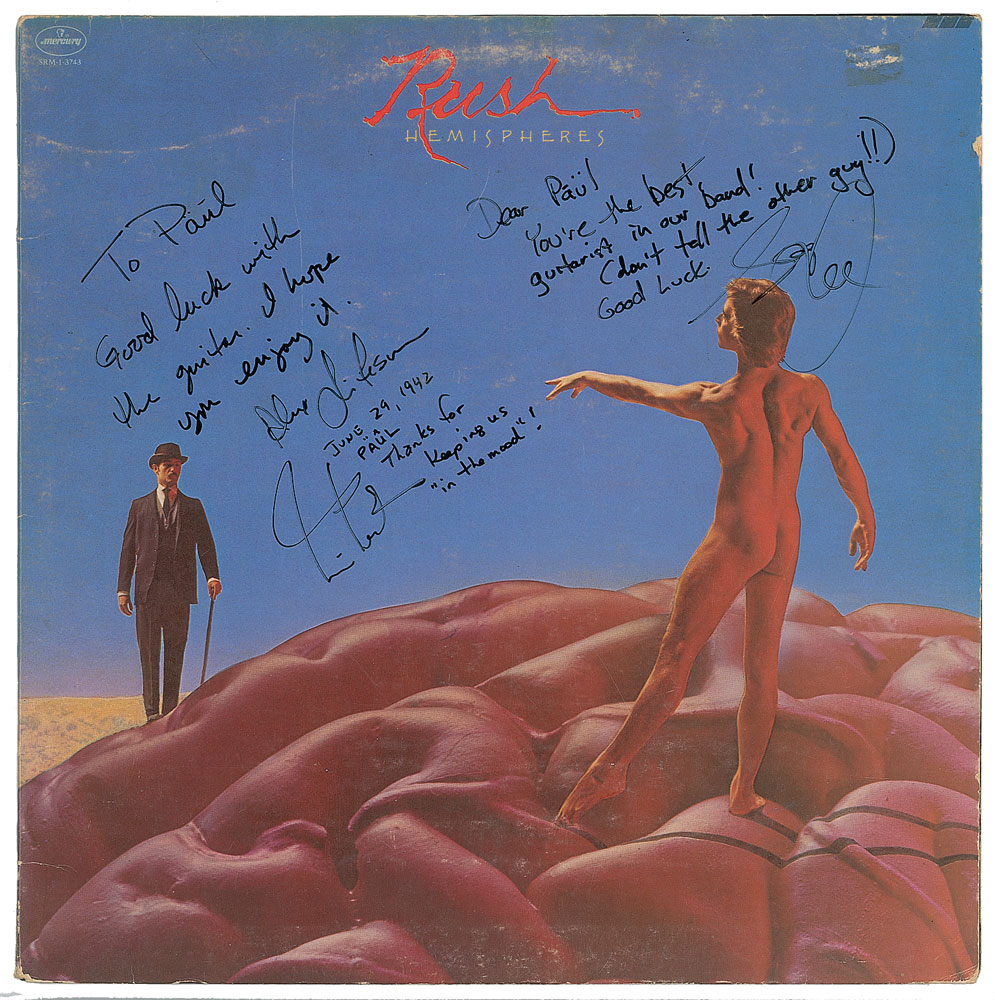 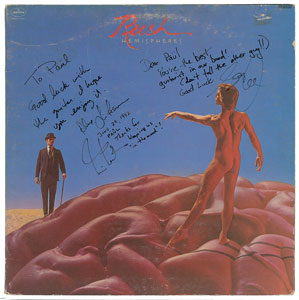 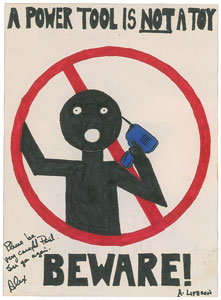 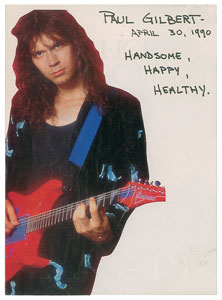 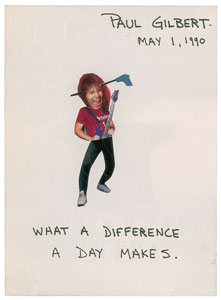 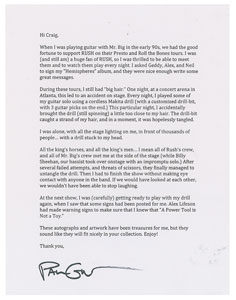 One-of-a-kind group lot from the personal collection of founding Mr. Big guitarist Paul Gilbert, which includes: a copy of Rush's 1978 album Hemispheres, signed and inscribed on the front cover in black felt tip, "To Paul, Good luck with the guitar. I hope you enjoy it. Alex Lifeson," "June 24, 1942, Paul, Thanks for keeping us 'in the mood! Neil Peart," and "Dear Paul, You're the best guitarist in our band (don't tell the other guy!!) Good luck, Geddy Lee."

The lot also features three posters handmade by Lifeson, which he posted backstage during the 1990 Presto Tour and then later presented to Gilbert as a humorous gift. The 8 x 11 posters, created with felt tip and pasted magazine images, relate to a certain power drill accident Gilbert suffered at a prior show: the first depicts a ‘warning sign’ with a figure holding a power drill and bold text reading, “A Power Tool Is Not a Toy, Beware!,” with Lifeson signing twice in the lower portion, “Alex” and “A. Lifeson,” and adding a brief inscription: “Please be careful Paul. See you again”; the second features a large image of Gilbert casually playing the guitar, with a caption by Lifeson in the upper right, “Paul Gilbert—April 30, 1990, Handsome, Happy, Healthy,” and the third shows a small image of Gilbert painfully playing the guitar with a power drill through his head, with Lifeson’s caption reading: “Paul Gilbert—May 1, 1990, What a difference a day makes.” In overall very good condition, with moderate scuffing, and slight surface loss to the old price sticker residue at the upper right corner. The record is included.

Includes a signed letter of provenance from Gilbert, in part: “When I was playing guitar with Mr. Big in the early 90s, we had the good fortune to support RUSH on their Presto and Roll the Bones tours. I was (and still am) a huge fan of RUSH, so I was thrilled to be able to meet them and to watch them play every night. I asked Geddy, Alex, and Neil to sign my ‘Hemispheres’ album, and they were nice enough to write some great messages.

During these tours, I still had ‘big hair.’ One night, at a concert arena in Atlanta, this led to an accident on stage. Every night, I played some of my guitar solo using a cordless Makita drill (with a customized drill-bit, with 3 guitar picks on the end.) This particular night, I accidentally brought the drill (still spinning) a little too close to my hair. The drill-bit caught a strand of my hair, and in a moment, it was hopelessly tangled…

All of Rush’s crew, and all of Mr. Big’s crew met me at the side of the stage…After several failed attempts, and threats of scissors, they finally managed to untangle the drill…At the next show, I was (carefully) getting ready to play with my drill again, when I saw that some signs has been posted for me. Alex Lifeson had made warning signs to make sure that I knew that ‘A Power Tool is Not a Toy.’”