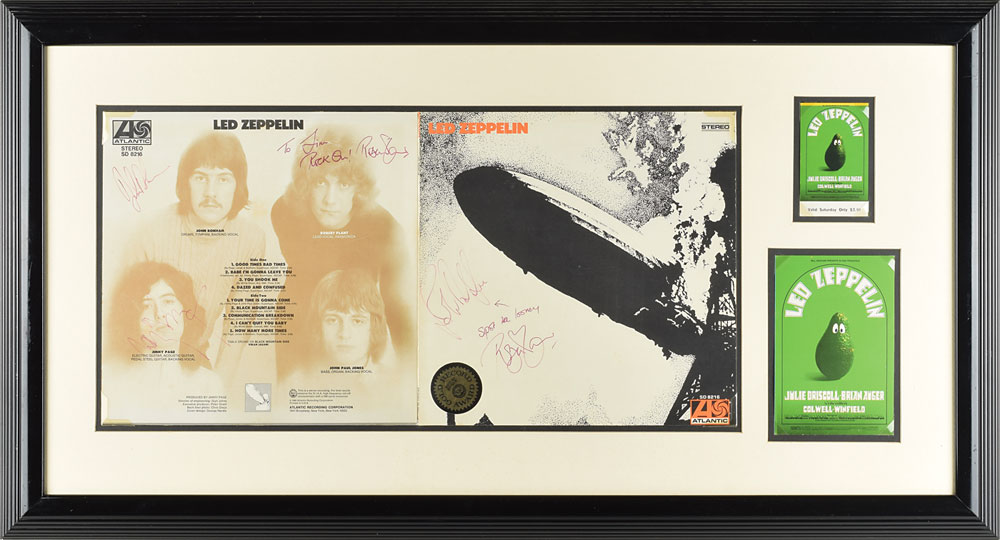 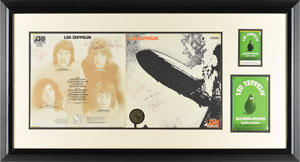 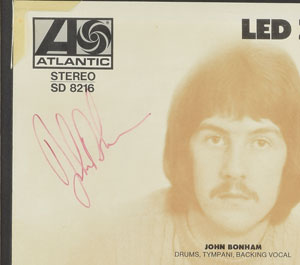 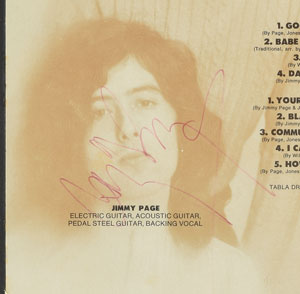 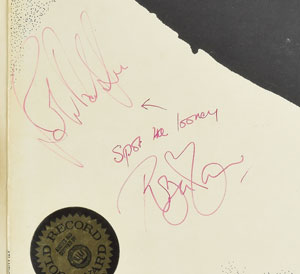 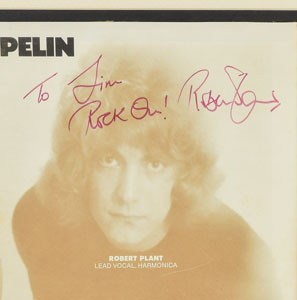 Self-titled debut album signed and inscribed on the back cover in felt tip, "To Jim, Rock On! Robert Plant," "John Bonham," and "Jimmy Page," and signed on the front cover, "John Paul Jones," with Plant signing again, "Robert Plant," and drawing an arrow to Jones's signature, adding, "Spot the looney." Corner-mounted, matted, and framed with a postcard and ticket stub for Led Zeppelin at the Fillmore in April 1969. In fine condition. The record is included in a sleeve applied to the frame's backing. The consignor notes that this signed album came from a road-crew member that worked for Led Zeppelin on their tours in the late 1960s into the 1970s.

Led Zeppelin’s eponymous debut released on Atlantic Records in mid January of 1969, roughly four months after the band played their first official concert together. By all accounts, the speed in which the group achieved success remains an unprecedented feat, with Page, then the only high-profile member of the group, footing the bill for the debut’s entire recording and mixing costs, a process that took a mere nine days.

At the time of the album’s release, Led Zeppelin were in the midst of their first North American tour, a 36-date endeavor enabled by the tour cancellation of manager Peter Grant’s other big act, The Jeff Beck Group. Zeppelin’s nearly two-month outing across Canada and the United States proved significant in the growth and visibility of the band. Despite initial mixed reviews, Led Zeppelin I received 50,000 advance orders en route to the album reaching number 10 on the Billboard chart and earning a gold certification in July 1969. Led Zeppelin’s debut has since gone platinum eight times and was inducted into the Grammy Hall of Fame in 2004.

As there are said to be fewer than thirty known fully signed Led Zeppelin albums extant, this example, augmented all the more by Plant's two signatures and humorous line, exists as a true rock history rarity.