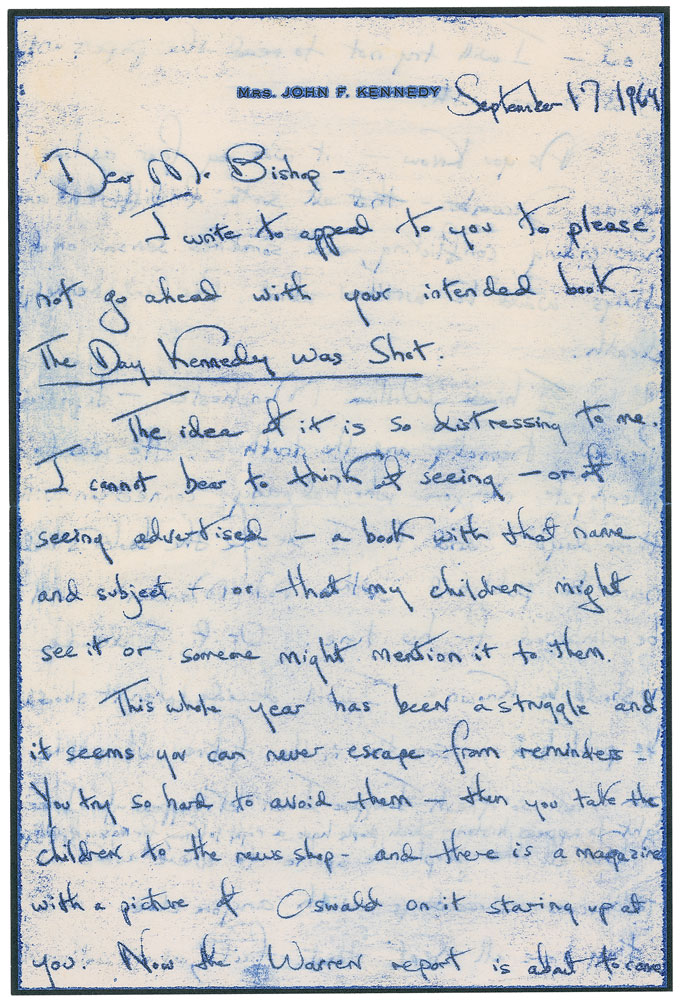 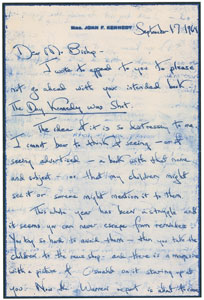 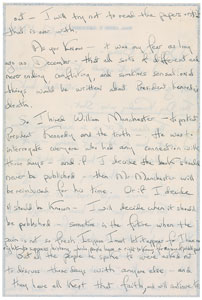 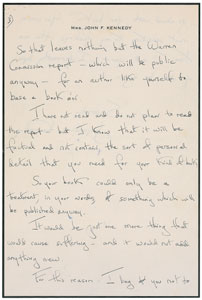 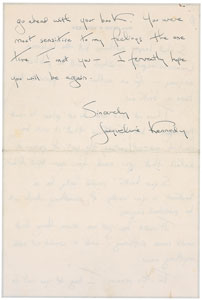 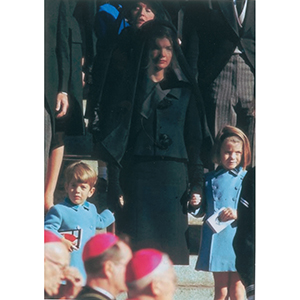 ALS, two pages both sides, 6.25 x 9.25, black-bordered personal letterhead, September 17, 1964. Mrs. Kennedy urgently appeals to Jim Bishop to relinquish plans to write his intended book, The Day Kennedy Was Shot. In full: “I write to appeal to you to please not go ahead with your intended book—The Day Kennedy Was Shot. The idea of it is so distressing to me. I cannot bear to think of seeing—or of seeing advertised—a book with that name and subject—or that my children might see it or someone might mention it to them. This whole year has been a struggle and it seems you can never escape from reminders. You try so hard to avoid them—then you take the children to the news shop—and there is a magazine with a picture of Oswald on it staring up at you. Now the Warren report is about to come out—I will try not to read the papers until it is over with. As you know, it was my fear as long ago as December [1963]—that all sorts of different and never ending, conflicting, and sometimes sensational things would be written about President Kennedy’s death. So I hired William Manchester—to protect President Kennedy and the truth. He was to interrogate everyone who had any connection with those days—and if I decide the book should never be published—then Mr. Manchester will be reimbursed for his time. Or if I decide it should be known, I will decide when it should be published—some time in the future when the pain is not so fresh.

I suppose I must let it appear as I have no right to suppress history, which people have a right to know, for reasons of private pain. But all the people he spoke to were asked not to discuss those days with anyone else—and they have all kept that faith, and will continue to. So that leaves nothing but the Warren Commission report, which will be public any way, for an author like yourself to base a book on. I have not read and do not plan to read the report—but I know it will be factual and not contain the sort of personal detail that you need for your kind of book. So your book could only be a treatment [of the Report], in your words, of something which will be published any way. It would be just one more thing that would cause suffering, and it would not add anything new. For this reason—I beg of you not to go ahead with your book. You were most sensitive to my feelings the one time I met you—I fervently hope you will be again.” The first page of the letter bears a blue cast caused when the letter was accidentally placed on a thermofax machine (giving the front page only a mimeographed appearance), otherwise fine condition. Accompanied by a photocopy of Bishop’s response to Kennedy’s letter, as well as a copy of a 1966 letter from Bishop to his editor at Random House, intending to proceed with the book even though Kennedy shut off his sources. Also includes a full letter of authenticity from PSA/DNA and several packets of information related to the letter, which is referenced in William Manchester’s essay ‘Controversy,’ and in the foreword to Bishop’s ‘The Day Kennedy Was Shot.’

Worried that “all sorts of different and never ending, conflicting, and sometimes sensational things would be written about President Kennedy’s death,” Jackie commissioned William Manchester to write an official account of the president’s final days in early 1964. He was given exclusive access to interview family members, friends, and associates of Kennedy’s—over a thousand people in total—and agreed to the stipulation that Mrs. Kennedy and Robert, then Attorney General, would have to approve the manuscript before it could be published, and that the earnings from the book would go to the JFK Library. Believing that she had the issue under control, Jackie was understandably upset when she received word that Jim Bishop (who had previously written A Day in the Life of President Kennedy, and met Mrs. Kennedy while working on it), was writing his own account. In an attempt to dissuade him, she appealed to him on an emotional level, discussing how difficult the year has been for her and especially her children, and on a business level, informing him that he would have access to no interviews, as Manchester was given that exclusive right. Despite these efforts, Bishop’s book was published in 1968 to great success.

In writing this emotional plea, Jacqueline Kennedy's handwriting remains remarkably steady and even despite reliving the most tragic moments of her life—a testament to the impressive and commanding mentality of a woman who has the protection of her children as her primary concern. A beautiful, significant letter from the aftermath of Camelot.