Historic 1804 certificate "relative to the Estate of Alexander Hamilton, deceased" 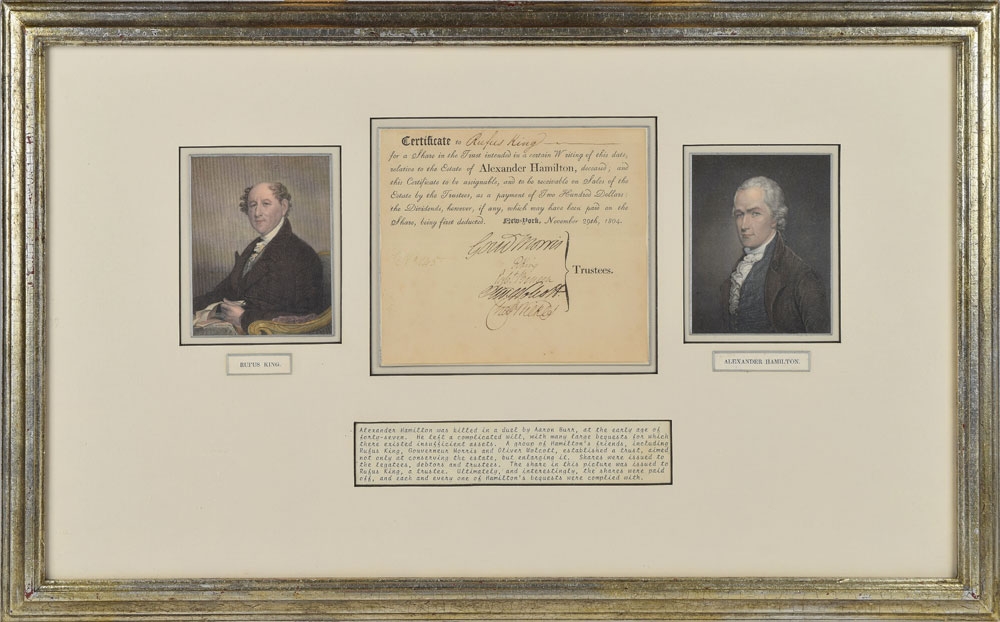 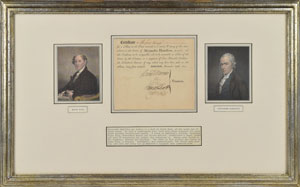 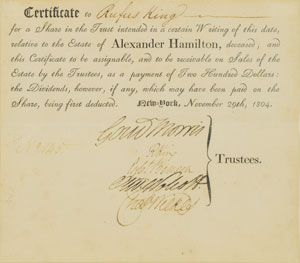 Historic 1804 certificate "relative to the Estate of Alexander Hamilton, deceased"

Significant partly-printed document concerning the estate of Alexander Hamilton, one page, 6.5 x 5.75, November 29, 1804. Marked as certificate "No. 145," in full: "Certificate to Rufus King for a Share in the Trust intended in a certain Writing of this date, relative to the Estate of Alexander Hamilton, deceased; and this Certificate to be assignable, and to be receivable on Sales of the Estate by Trustees, as a payment of Two Hundred Dollars: the Dividends, however, if any, which may have been paid on the Share, being first deducted." Signed at the conclusion by trustees Gouverneur Morris, Rufus King, Egbert Benson, Oliver Wolcott, Jr., and Charles Wilkes. Mounted, matted, and framed with engraved portraits of Hamilton and King, as well as a descriptive caption, to an overall size of 24.5 x 15.25. In fine condition.

Hamilton died on July 12, 1804, after being mortally wounded in his legendary and dramatic duel with rival politician Aaron Burr. He left a complicated will with many large bequests for which there existed insufficient assets. A group of his friends—Gouverneur Morris, Rufus King, Egbert Benson, Oliver Wolcott, Jr., and Charles Wilkes—established a trust, aimed not only at conserving the estate, but enlarging it to support his family. Shares were issued to the legatees, debtors, and trustees of the estate. Ultimately, the shares were paid off, and each and every one of Hamilton's bequests were complied with. The men who signed this certificate were not only Hamilton's friends, but important political leaders themselves: Gouverneur Morris signed the Articles of Confederation and the Constitution, and delivered Hamilton's eulogy; Rufus King signed the Constitution and was a senator, and pleaded with Hamilton to decline the tragic duel; Egbert Benson attended New York's Constitutional Convention and served in Congress; Oliver Wolcott, Jr., succeeded Hamilton as Secretary of the Treasury; and Charles Wilkes was Hamilton's longtime friend and president of the Bank of New York. Together, these men were able to save the Hamilton family from catastrophic financial ruin following their friend's death. A scarce and highly desirable early American document.