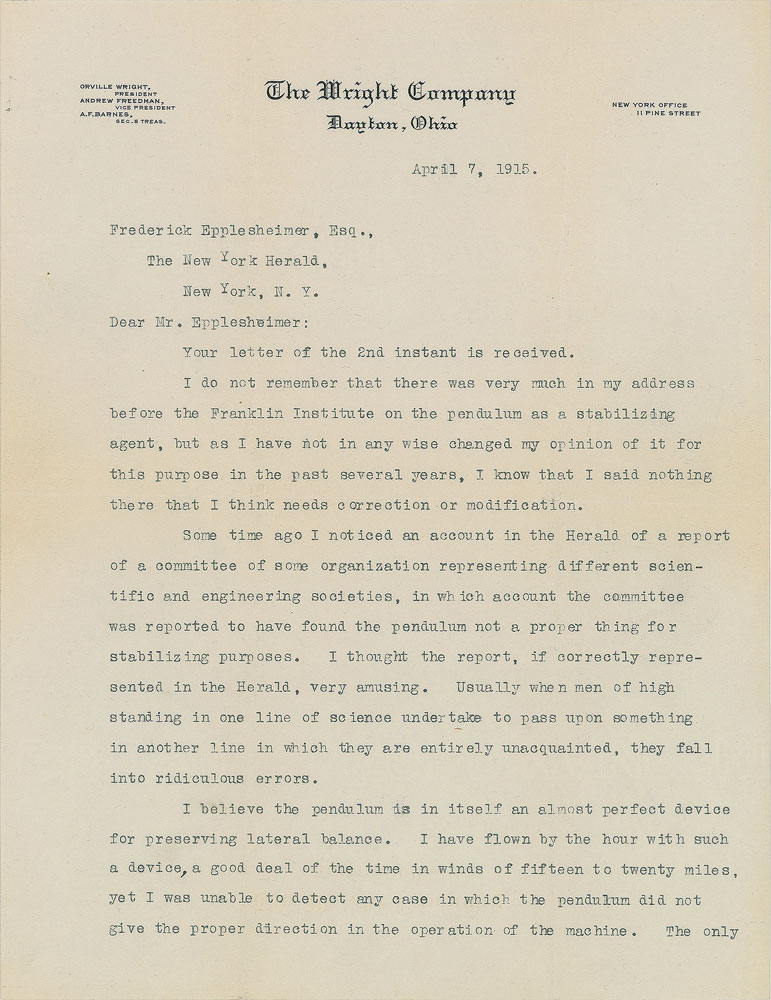 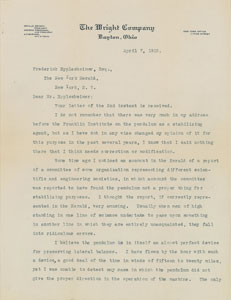 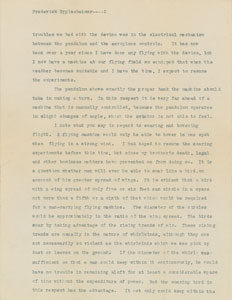 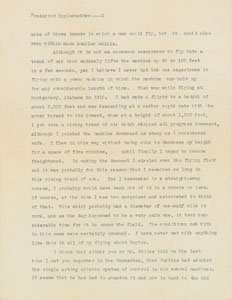 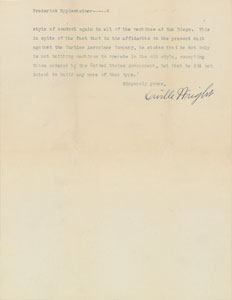 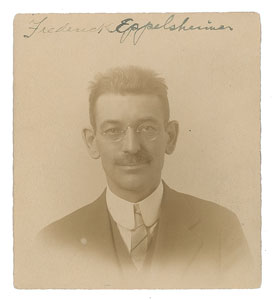 TLS, four pages, 8.5 x 11, The Wright Company letterhead, April 7, 1915. Letter to Frederick Eppelsheimer of the New York Herald, discussing the possibility of using a pendulum to stabilize aircraft, mentioning the death of his brother Wilbur, and referencing fellow aviation pioneer Glenn Curtiss. In part: "Some time ago I noticed an account in the Herald of a report of a committee of some organization representing different scientific and engineering societies, in which account the committee was reported to have found the pendulum not a proper thing for stabilizing purposes. I thought the report, if correctly represented in the Herald, very amusing. Usually when men of high standing in one line of science undertake to pass upon something in another line which they are entirely unacquainted, they fall into ridiculous errors.

I believe the pendulum is in itself an almost perfect device for preserving lateral balance. I have flown by the hour with such a device, a good deal of the time in winds of fifteen to twenty miles, yet I was unable to detect any case in which the pendulum did not give the proper direction in the operation of the machine. The only troubles we had with the device was in the electrical mechanism between the pendulum and the aeroplane controls. It has now been over a year since I have done any flying with the device, but I now have a machine at our flying field so equipped that when the weather becomes suitable and I have the time, I expect to resume the experiments. The pendulum shows exactly the proper bank the machine should take in making a turn. In this respect it is very far ahead of a machine that is manually controlled, because the pendulum operates in slight changes of angle, which the aviator is not able to feel.

I note what you say in regard to soaring and hovering flight. A flying machine would only be able to hover in one spot when flying in a strong wind. I had hoped to resume the soaring experiments before this time, but since my brother's death, legal and other business matters have prevented me from doing so. It is a question of whether man will ever be able to soar like a bird, on account of his greater spread of wings. It is evident that a bird with a wing spread of only five or six feet can circle in a space not more than a fifth or a sixth of that which would be required for a man-carrying flying machine. The diameter of the circles would be approximately in the ratio of the wing spread. The birds soar by taking advantage of the rising trends of air. These rising trends are usually in the nature of whirlwinds, although they are not necessarily so violent as the whirlwinds which we see pick up dust or leaves on the ground. If the diameter of the whirl was sufficient so that a man could keep within it continuously, he would have no trouble in remaining aloft for at least a considerable space of time without the expenditure of power. But the soaring bird in this respect has the advantage. It not only could keep within the area of those trends in which a man could fly, but it could also keep within much smaller whirls.

Although it is not an uncommon occurrence to fly into a trend of air that suddenly lifts the machine up 50 or 100 feet in a few seconds, yet I believe I never had but one experience in flying with a power machine in which the machine was was held up for any considerable length of time. That was while flying at Montgomery, Alabama in 1910. I had made a flight to a height of about 3,000 feet and was descending at a rather rapid rate with the power turned to its lowest, when at a height of about 1,500 feet, I got into a rising trend of air which stopped all progress downward, although I pointed the machine downward as steep as I considered safe. I flew this way without being able to decrease my height for a space of five minutes, until finally I began to become frightened. In making the descent I circled over the flying field and it was probably for this reason that I remained so long in this rising trend of air. Had I descended in a straight-away course, I probably would have been out of it in a minute or less. Of course, at the time I was too surprised and astonished to think of that. This whirl probably had a diameter of one-half mile or more, and as the day happened to be a very calm one, it took considerable time for it to cross the field. The conditions met with in this case were certainly unusual. I have never met with anything like this in all of my flying about Dayton.

I think that either you or Mr. Stiles told me the last time I met you together in the Manhattan, that Curtiss had adopted the single acting aileron system of control in his school machines. It seems that he has had to abandon it and now is back to the old style of control again in all of the machines at San Diego. This in spite of the fact that in his affidavits in the present suit against the Curtiss Aeroplane Company, he states that he not only is not building machines to operate in the old style, excepting those ordered by the United States Government, but that he did not intend to build any more of that type." In fine condition. Accompanied by a small matte-finish portrait of Eppelsheimer, marked on the reverse, "1918 passport to France."

Orville had spent several years developing an ‘auto-pilot’ system, a design based on a pendulum to provide lateral stabilization to an aircraft. He had first demonstrated it publicly in 1913, but the Wright design was soon eclipsed by a gyroscopic stabilizing device developed by Lawrence Sperry. Wright further makes mention of his brother Wilbur’s death in 1912, and the complicated business and matters in the years that followed—chief among them, which Orville alludes to at the conclusion, were the ‘Wright Brothers Patent Wars,’ a series of long and drawn out lawsuits against competitors, including fellow pioneer Glenn S. Curtiss. Touching upon numerous aspects of aircraft innovation and the Wright Brothers’ legacy, this relatively early letter is a truly remarkable piece of aviation history.