Jefferson requests an innovative new spinner to be delivered by sea, noting "the enemy have not yet had time to spread their privateers on our coast" 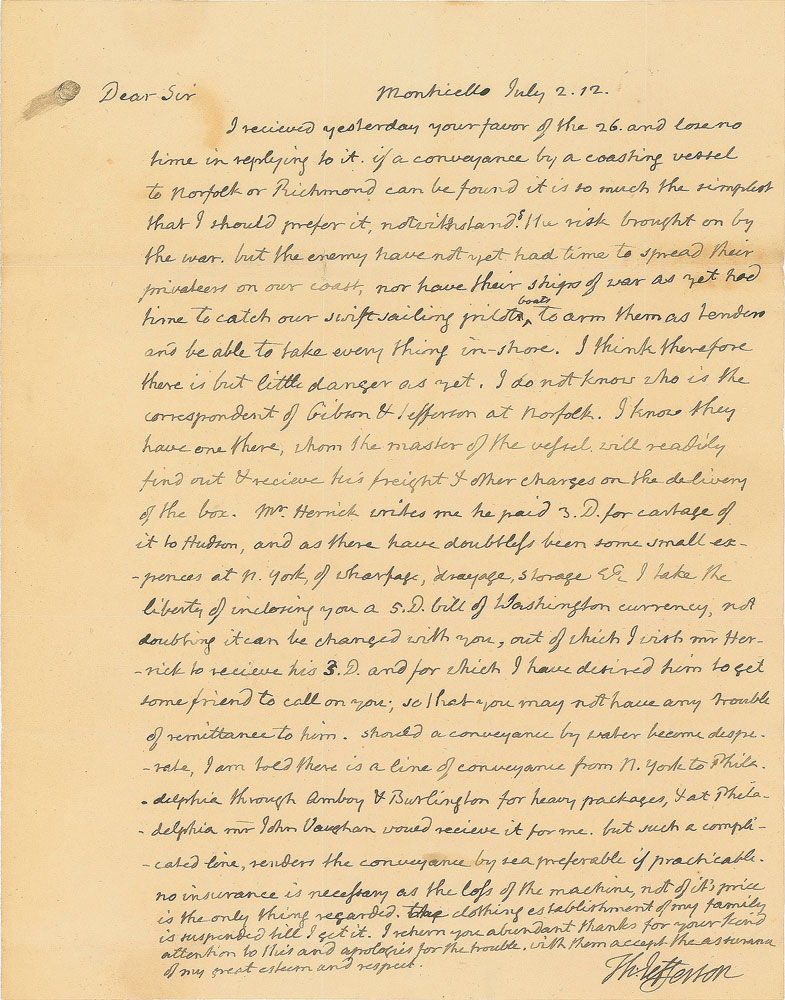 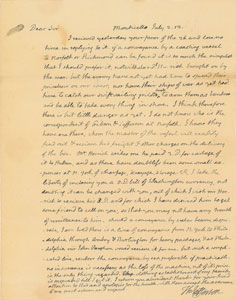 Jefferson requests an innovative new spinner to be delivered by sea, noting "the enemy have not yet had time to spread their privateers on our coast"

War-dated ALS signed “Th: Jefferson,” one page, 7.75 x 9.75, July 2, 1812. Written from Monticello, a letter to David Gelston, in part (grammar and spelling retained): “I received yesterday your favor of the 26. and lose no time in replying to it. if a conveyance by a coasting vessel to Norfolk or Richmond can be found it is so much the simplest that I should prefer it, notwithstand’g the risk brought on by the war. but the enemy have not yet had time to spread their privateers on our coast, nor have their ships of war as yet had time to catch our swift sailing…boats to arm them as London and be able to take every thing in-shore. I think therefore there is but little danger as yet. I do not know who is the correspondent of Gibson & Jefferson at Norfolk. I know they have one there, whom the master of the vessel will readily find out & receive his freight & other charges on the delivery of the box. Mr. Herrick writes me he paid 3. D. for cartage of it to Hudson, and as there have doubtless been some small expences at N. York, of wharfage, drayage, storage etc. I take the liberty of inclosing you a 5. D. bill of Washington currency, not doubting it can be changed with you, out of which I wish Mr. Herrick to receive his 3. D. and for which I have desired him to get some friend to call on you; so that you may not have any trouble of remittance to him. should a conveyance by water become desperate, I am told there is a line of conveyance from N. York to Philadelphia through Amboy & Burlington for heavy packages, & at Philadelphia mr John Vaughan would receive it for me. but such a complicated line, renders the conveyance by sea preferable if practicable. no insurance is necessary as the loss of the machine, not of it’s price is the only thing regarded. the clothing establishment of my family is suspended till I get it. I return you abundant thanks for your kind attention to this and apologies for the trouble.” In fine condition, with a few light stains.

When the embargo of 1808-1809 and the War of 1812 successfully cut off the importation of goods to the United States, Jefferson was forced to manufacture the cloth for his plantation with trusted machines like the spinning wheel, the common loom, and the hand card. Improving on Richard Arkwright’s innovative water-powered spinning frame, Ebenezer Herrick of West Stockbridge, Massachusetts, developed a similar and smaller device coined the ‘Domestic Spinner.’ Confident that Herrick’s machine would meet the needs of his growing plantation, Jefferson made sure to arrange a delivery to Monticello by “a coasting vessel” before shipping lanes grew too hazardous.

On the same day he wrote this letter, Jefferson wrote to Herrick requesting the delivery of his machine, in part: ‘I this day include your 3. Dollars for cartage in a small remittance I make to mr Gelston to meet other petty charges, but you must have the goodness to direct some friend going to N. York to call on mr Gelston for the 3.D. he has retained the machine for further orders on account of the danger of capture by sea: but I desire him to risk it, and if it is taken I must apply to you for another, & try another chance. it is the smallness and presumed simplicity of this machine which makes me anxious to get it, as I expect it will best suit the situation of a family in he country. we have Jennies, & mules & Arkwright’s machines in the neighborhood so that I suppose we shall be able to understand yours.’