Retired to Mount Vernon, Washington writes his nephew on ancestry and agriculture 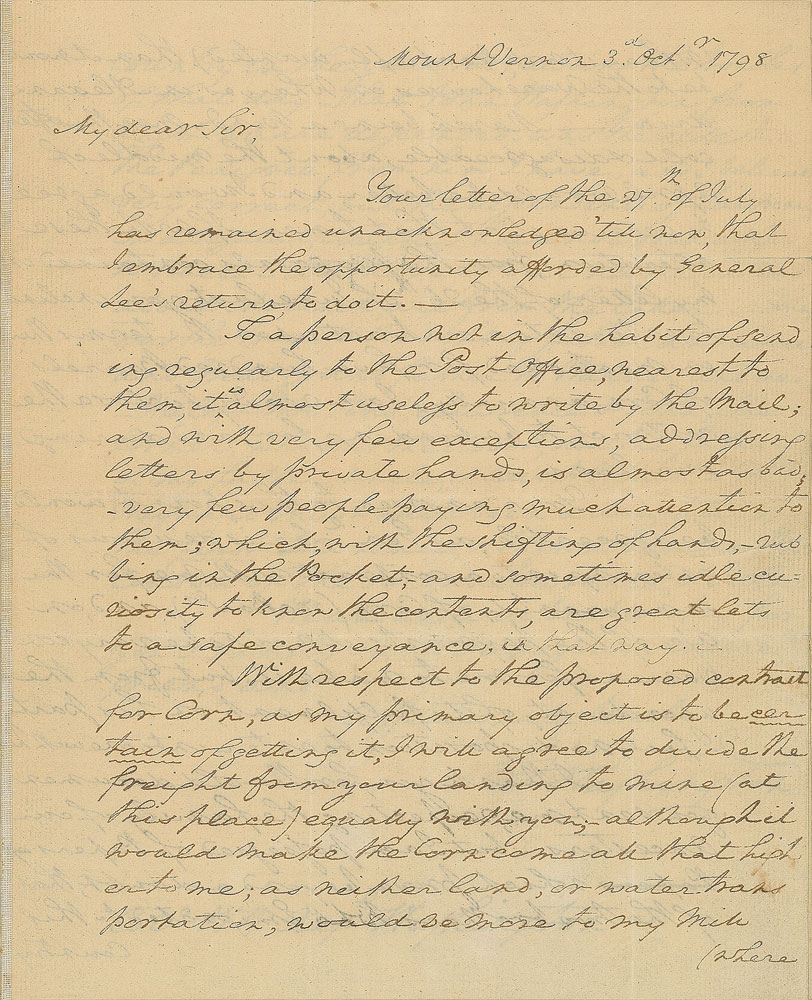 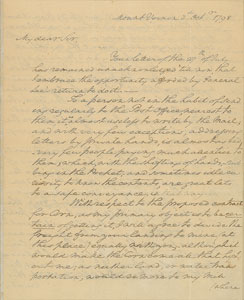 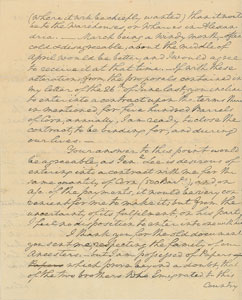 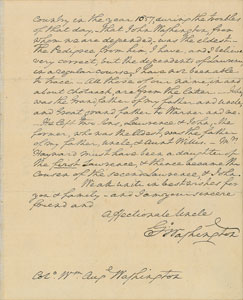 Retired to Mount Vernon, Washington writes his nephew on ancestry and agriculture

Marvelous ALS signed “Go: Washington,” three pages on two adjoining sheets, 7.75 x 9.75, October 3, 1798. Written from Mount Vernon, a finely penned letter to his nephew Colonel William Augustine Washington, in part: “Your letter of the 27th. of July has remained unacknowledged ‘till now, that I embrace the opportunity afforded by General Lee’s return, to do it.

To a person not in the habit of sending regularly to the Post Office, nearest to them, it is almost useless to write by the mail; and with very few exceptions, addressing letters by private hands, is almost as bad, very few people paying much attention to them; which, with the shifting of hands, rubbing in the pocket, and sometimes idle curiosity to know the contents, are great lets to a safe conveyance, in that way.

With respect to the proposed contract for corn, as my primary object is to be certain of getting it, I will agree to divide the freight from your landing to mine (at this place) equally with you; although it would make the corn come all the higher to me; as neither land, or water transportation, would be more to my mill (where it will be chiefly wanted) than it would be to the warehouses, or Wharves in Alexandria. March being a windy month, often cold & disagreeable; about the middle of April would be better, and I would agree to receive it at that time. If with these alterations, from the proposals contained in my letter of the 26th of June last, you incline to enter into a contract upon the terms therein mentioned, for five hundred Barrels of corn, annually, I am ready to close the contract, to be binding for, and during our lives.

Your answer to this point would be agreeable, as Gen’l. Lee is desirous of entering into a contract with me for the same quantity of corn (500 Bar’ls); and on a/c of the payments, it would be very convenient for me to make it; but from the uncertainty of its fulfillment, on his part, I feel no disposition to enter into one with him.

I thank you for the old documents you sent me, respecting the family of our ancestors, but I am possessed of Papers which prove beyond a doubt, that of the two brothers who emigrated to this Country in the year 1657, during the troubles of that day, that John Washington, from whom we are descended, was the eldest. The Pedigree from him, I have, and I believe very correct; but the descendants of Lawrence, in a regular course, I have not been able to trace. All those of our name, in and about Chotanck, are from the latter. John, was the Grandfather of my father and Uncle, and Great grand father to Warner and me. He left two sons, Lawrence & John; the former, who was the eldest, was the father of my father, uncle, and Aunt Willis. Mrs. Hayward must have been a daughter of the first Lawrence, & thence became the cousin of the second Lawrence, & John. We all unite in best wishes for you & family, and I am your sincere friend and Affectionate Uncle.” Professionally inlaid into a slightly larger sheet. In fine condition.

On July 13, 1798, Washington readily accepted President Adams’ commission to lead the United States Army in the burgeoning Quasi War with France. The high-ranking post demanded little of Washington who, while happily ensconced at his home in Mont Vernon, entrusted the lion’s share of his duties to inspector general of the Army, Alexander Hamilton. Given the flexibility of his post, and barring the emergence of a French invasion, Washington once again settled into retirement as a private citizen, content with overseeing renovations to his mansion and the myriad operations of his five farms and sprawling 7,400-acre estate.

Concerning Washington’s ancestry, and according to biographer D. S. Freeman, the man ‘knew scarcely anything…all he remembered at sixty was that in youth he had been told the family had come from one of the Northern Counties of England. He was not sure whether it was Lancashire or Yorkshire or a region still farther North.’ The extent of his genealogical knowledge uncertain, Washington was, at the very least, capable of tracing his lineage back to that of his great-great-grandfather, Lawrence Washington. A magnificent and lengthy handwritten letter from Washington relating to both his agricultural acumen and to that of his own family tree.