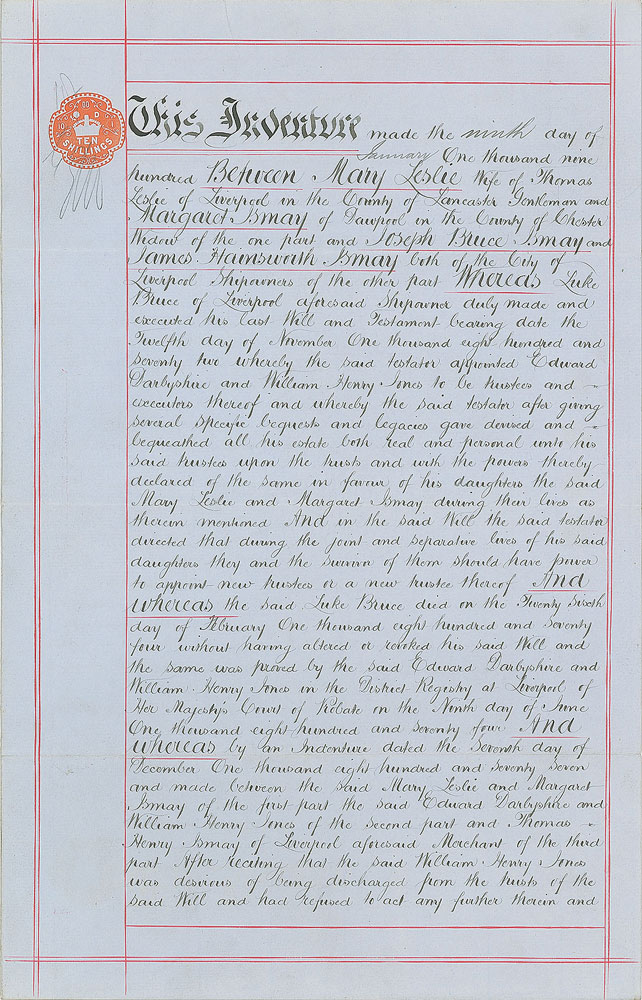 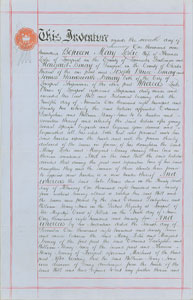 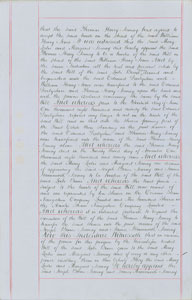 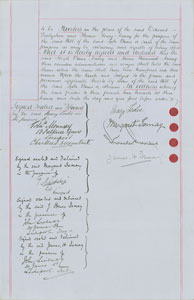 Chairman and managing director of the White Star Line (1862-1937). He came to rather negative international attention as the highest-ranking White Star official among the survivors, for reportedly deserting the ship while women and children were still on board. Rare manuscript DS, signed “J. Bruce Ismay,” three pages on two adjoining sheets, 9.75 x 15.25, January 9, 1900. Indenture in which heirs Mary Leslie and Margaret Ismay appoint Joseph Bruce Ismay [J. Bruce Ismay] and James Hainsworth Ismay to be trustees of the will of the late Luke Bruce, the maternal grandfather of J. Bruce Ismay. The document outlines the history of Luke Bruce's will and estate, noting that he was a "Shipowner" and that the "trusts of the said Will now consist of and are represented by ten Shares in the Oceanic Steam Navigation Company Limited and Five hundred Shares in the Asiatic Steam Navigation Company Limited." Neatly signed and sealed at the conclusion by the parties involved: Mary Leslie, Margaret Ismay, J. Bruce Ismay, and James H. Ismay. Also signed multiple times by witnesses.

Includes a large vellum document marked "Probate of the Will of Mr. Luke Bruce, Dated the 9th June 1874," one page, 27 x 20.5, featuring an extract of the "Last Will and Testament" of Luke Bruce. The will names J. Bruce Ismay specifically, "I give to my Grandson Joseph Bruce Ismay my Watch, Jewellery and the Silver Salver presented to me by my friends," while the bulk of his fortune was to be placed in the trust. A document from Her Majesty's Probate Court certifying the will is attached at the bottom, and an impressive embossed paper seal is suspended from the large document. In overall fine condition.