Mere months before ceding New Amsterdam to the Duke of York 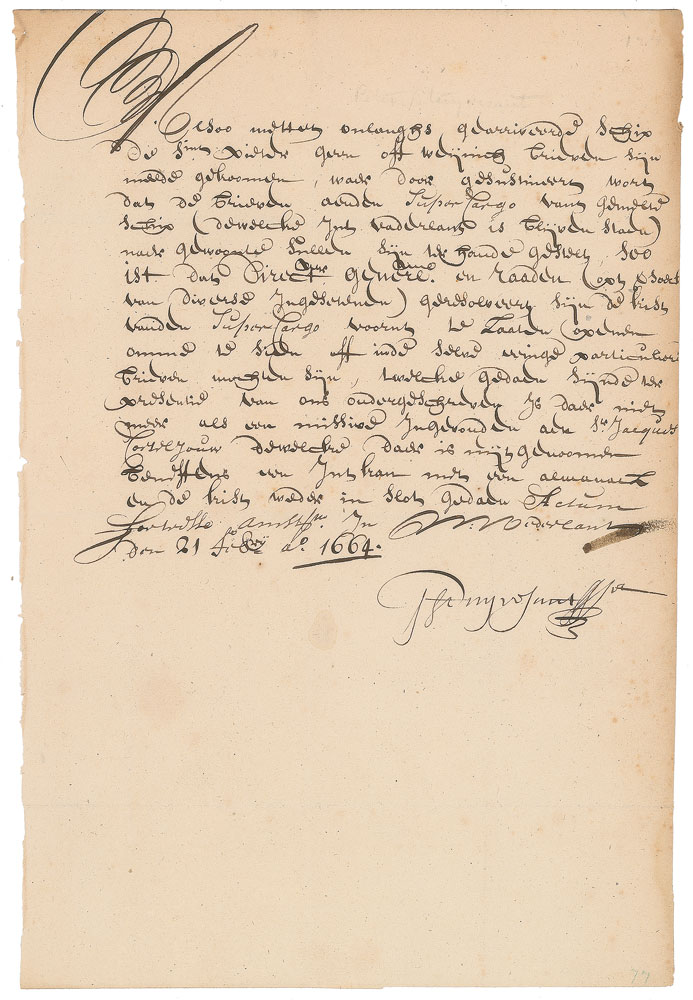 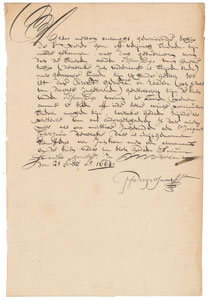 Mere months before ceding New Amsterdam to the Duke of York

Last Dutch Director-General of the colony of New Netherland (1612-1672) who was a major figure in the early history of New York City. Incredibly rare LS in Dutch, signed “P. Stuyvesant,” one page, 7.25 x 10.75, February 21, 1664. Written from Fort Amsterdam, in full (translated): "When few or no letters came with the recently arrived ship Saint Peter, it was said that the letters as usual will have been handed to he Supercargo of this ship (who stayed in the fatherland). Therefore the General Directors and Council members (at the request of various citizens) decided to have the crate of aforementioned Supercargo opened to see if it contained any private letters. This having been done in the presence of the undersigned, nothing was found other than a missive to Mr. Jacques Cortljouw, which was removed, in addition to an ink pot with an almanac, after which the chest was locked again." In fine condition.

The one-legged Stuyvesant, often referred to as either ‘Peg Leg Pete’ or ‘Old Silver Nails’ on account of his nail-studded prosthesis, served as the director-general of New Amsterdam for the final time in 1664. Situated within Fort Amsterdam on the southern tip of present-day Manhattan, Stuyvesant had run the Dutch colony for nearly 17 years, and achieved much in improving the economy and quelling Indian hostilities that threatened the growth of Dutch settlement. His charge came to end, however, when on August 27, 1664, four English frigates sailed into New Amsterdam’s harbor and demanded New Netherland’s surrender. Initially defiant, Stuyvesant soon yielded when his call-to-arms went unheeded, and he was forced to sign a treaty on September 9th, thus ceding the colony to the Duke of York. A tremendously rare letter dated to a period of immense Anglo-Dutch rivalry and the subsequent origin of New York. Additionally, this letter mentions Jacques Cortelyou, surveyor general of New Amsterdam, whose Cortelyou Survey is considered to be the first map of New York City.