General Washington from West Point in 1778: "This intelligence if true is important" 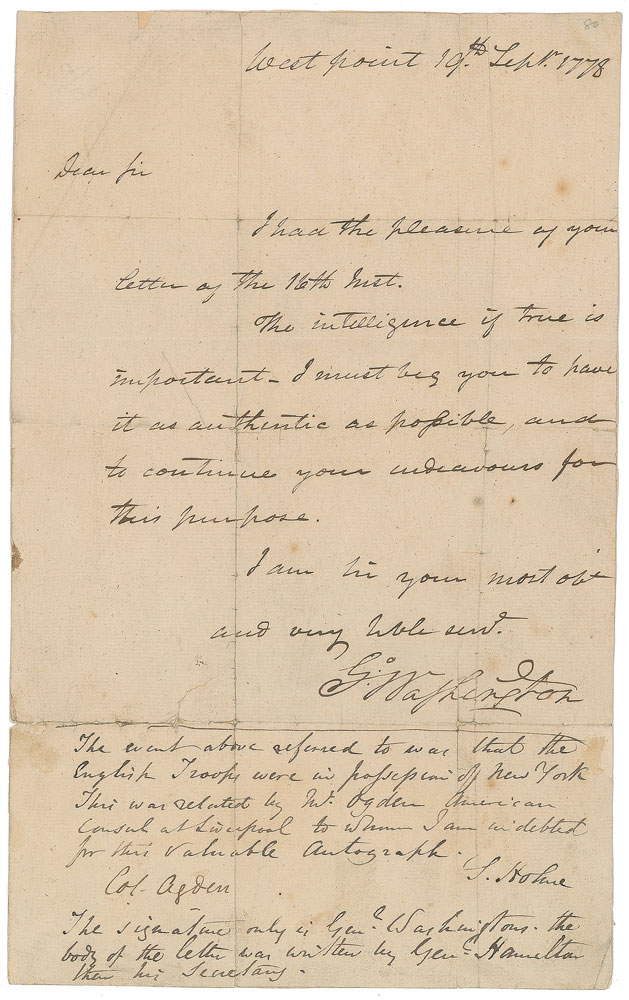 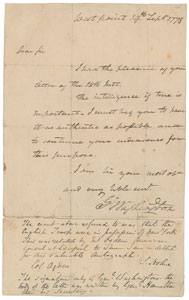 General Washington from West Point in 1778: "This intelligence if true is important"

Revolutionary War-dated LS signed “G:o Washington,” one page, 7.25 x 11.75, September 19, 1778. Letter to Col. Matthias Ogden, sent from "West Point," the body written in the hand of Washington’s aide and future Secretary of the Treasury Alexander Hamilton. In full: "I had the pleasure of your letter on the 16th Inst. This intelligence if true is important—I must beg you to have it as authentic as possible, and to continue your endeavors for this purpose." In the lower margin is a 19th-century collector’s annotation: “The event above referred to was that the English Troops were in possession of New York. This was related by Mr. Ogden American Consul at Liverpool to whom I am indebted for this valuable autograph…The signature only is in Gen’l Washington’s, the body of the letter was written by Gen’l Hamilton then his secretary.” Affixed to a same-size sheet and in very good to fine condition, with scattered creasing and some splitting to intersecting folds.

In 1778, after the Battle of Monmouth, at which General Washington's troops fought General Clinton's army to a standstill, Washington set up headquarters at West Point, New York. Although Monmouth would turn out to be the last significant military engagement in the northern theater, the north was still the scene of important maneuvers. From his vantage in West Point, Washington relied on incoming reports from officers and a network of informants to apprise him of developments in Boston, Rhode Island, New York, and New Jersey.

This is a response to Colonel Matthias Ogden’s letter of September 16th, in which he informed General Washington: ‘The following intelligence may be relied on—That all the enemys transports are watering in and about New York; & that the men are returned to them, that have been on board the Men of War. A number of troops including some companies of artillery are certainly going for the West Indies very soon. By some of the knowing ones, it is strongly suspected the whole army will leave N. York this fall.’ He also informed Washington of a potential British expedition into New Jersey to gather supplies. Col. Ogden’s specific intelligence proved accurate: Charles Cornwallis undertook a foraging expedition to New Jersey in September and October, and James Grant would sail for the West Indies in November. Col. Ogden’s son, Francis Barber Ogden, who served as the US consul in Liverpool from 1829 to 1840, is referenced in the collector’s notation as the source of this letter. Made even more desirable by the presence of Alexander Hamilton’s handwriting, this is a remarkable letter from Washington’s critical intelligence-gathering campaign of the autumn of 1778.