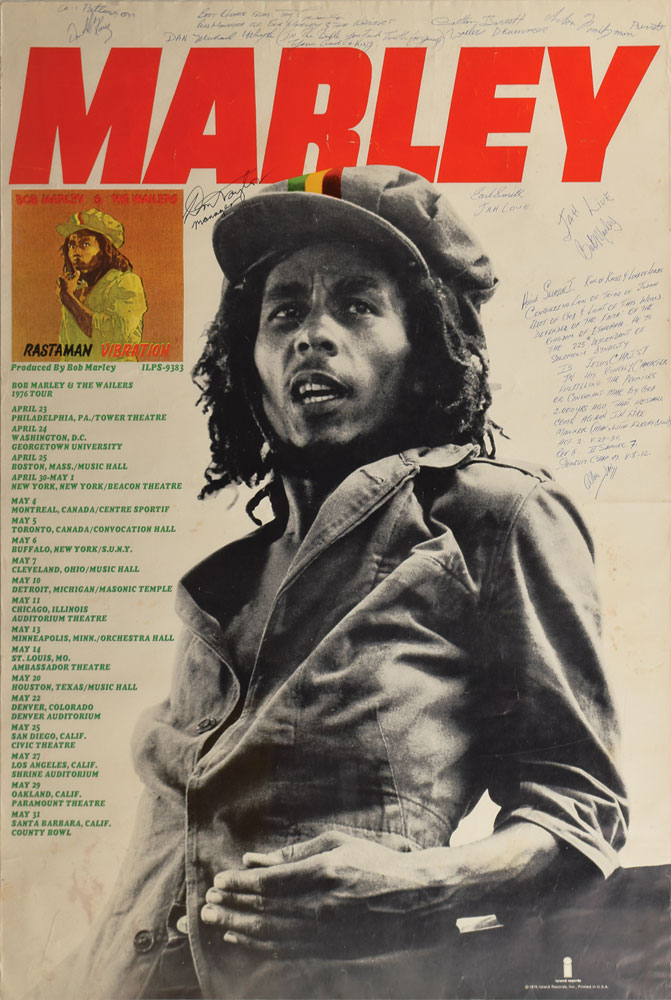 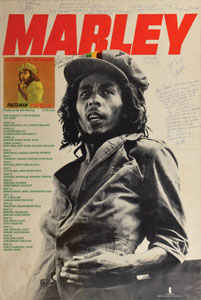 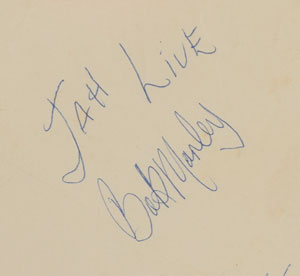 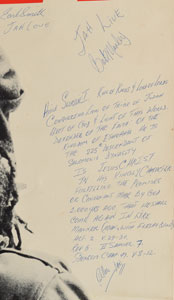 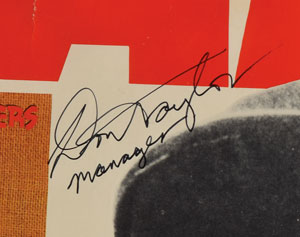 Very desirable color 23.5 x 35 Island Records poster for Bob Marley and the Wailers' 1976 North American Tour, which features a large half-length image of Marley, various tour dates and an image of the cover for the Rastaman Vibration album, and his surname in bold red text along the top. The poster is signed along the right side in blue ballpoint, "Jah Live, Bob Marley," who adds below: "‘Haile Selassie I. King of kings & Lord of Lords, Conquering Lion of Tribe of Judah, Elect of God & Light of This World. Defender of the Faith: of the Kingdom of Ethiopia. He is the 225th Descendant of Solomonic Dynasty. Is Jesus Christ in His Kingly Character Fulfilling the Promises or Covenant Made by God 2,000 Years Ago That He Shall Come Again in Like Manner (Man, with Flesh & Blood), Act. 2. V. 29-30, Rev. 5. II Samuel. 7. Genesis Chap. 49. V. 8-12. Allah Dan." The poster is also signed in thin black felt tip, “Don Taylor, Manager,” and in ballpoint, “Al Patterson,” “Donald Kinsey,” “Best wishes from: Tony Gilbert, Road Manager for Bob Marley & The Wailers,” “Michael Whyte, (In the Bible you Find Truth for yourself, Your God & King),” with an unknown hand adding “Dan” before his name, “Carlton Barrett, Wailers Drummer,” “Aston Family man Barrett,” and “Earl Smith, Jah Love.” Rolled and in very good to fine condition, with scattered light creasing and some light staining near the edges. Accompanied by a certificate of authenticity from Tracks. Consignor notes that the signatures were obtained by a cleaner at a Miami hotel when Marley & the Wailers were staying there during rehearsals prior to their show on June 1, 1976. The Rastaman Vibration Tour began in Upper Darby, Pennsylvania, on April 23, and concluded its North American leg in Natchez, Mississippi, on June 3, 1976, a highly successful run of 27 shows that complemented the impressive album sales of Rastaman Vibration; the record peaked at number eight on the Billboard 200 chart, the first Bob Marley release to reach the top 10, and it featured Marley's most popular US single 'Roots, Rock, Reggae,' the only Marley single to reach the Billboard Hot 100 chart. Signed by nine touring members of the Wailers, and elevated furthermore by Marley’s lengthy Rastafarian verse, this is a rare and highly displayable concert poster dating to the band's most successful period.

This item is Pre-Certified by Real
Buy a third-party letter of authenticity for $200.00