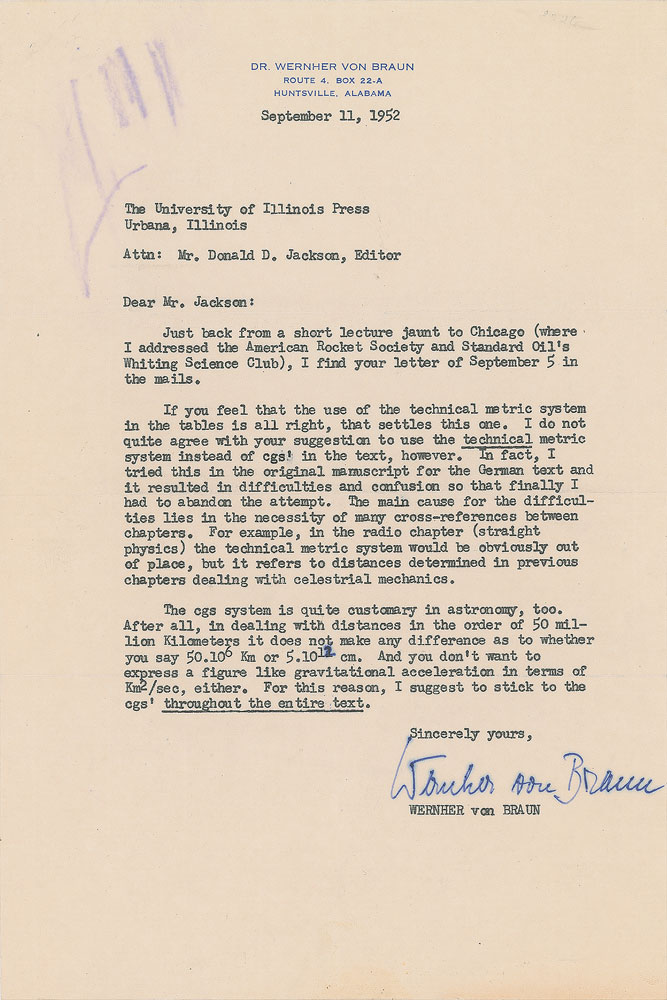 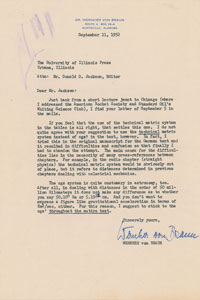 TLS, one page, 7.25 x 10.75, personal letterhead, September 11, 1952. Letter to Donald D. Jackson, editor of the University of Illinois Press, in full: "Just back from a short lecture jaunt to Chicago (where I addressed the American Rocket Society and Standard Oil's Whiting Science Club), I find your letter of September 5 in the mails. If you feel that the use of the technical metric system in the tables is all right, that settles this one. I do not quite agree with your suggestion to use the technical metric system of cgs in the text, however. In fact, I tried this in the original manuscript for the German text and it resulted in difficulties and confusion so that finally I had to abandon the attempt. The main cause for the difficulties lie in the necessity of many cross-references between chapters. For example, in the radio chapter (straight physics) the technical metric system would be obviously out of place, but it refers to distances determined in previous chapters dealing with celestrial mechanics. The cgs system is quite customary in astronomy, too. After all, in dealing with distances in the order of 50 million Kilometers it does not make any difference as to whether you say 50.10(6) or 5.10(12) cm. And you don't want to express a figure like gravitational acceleration in terms of Km2/sec, either. For this reason, I suggest to stick to the cgs throughout the entire text." In fine condition, with some marks to upper left.

In March 1952, von Braun published the first of a series of articles for Collier’s magazine dedicated to interplanetary spaceflight. Accompanied by illustrations from Chesley Bonestell, Fred Freeman, and Rolf Klep, the articles thrilled a generation and soon led to the publication of The Mars Project in 1953 by the University of Illinois Press. Von Braun envisioned a 70-member crew aboard a fleet of ten spacecraft, comprised of seven ‘passenger’ ships and three ‘cargo’ ships. The cargo ships would orbit the planet and dispatch groups of explorers to the Martian surface on the smaller passenger vessels. In the launch toward Mars the ships would fire their engines for 66 minutes, using more than three-quarters of the propellant on board, and enter a coast for 260 days until arriving at their destination. They would then spend 443 days exploring Mars before returning to Earth, another 260-day voyage. Predating NASA and the launch of his famous Saturn V rocket, this is an extraordinary letter relating to von Braun’s long-held dreams of a Martian voyage. From The Bill Lende Collection.