Two weeks after the lunar landing, von Braun reveals his past: “I was a member of Hitler's elite SS Corps” 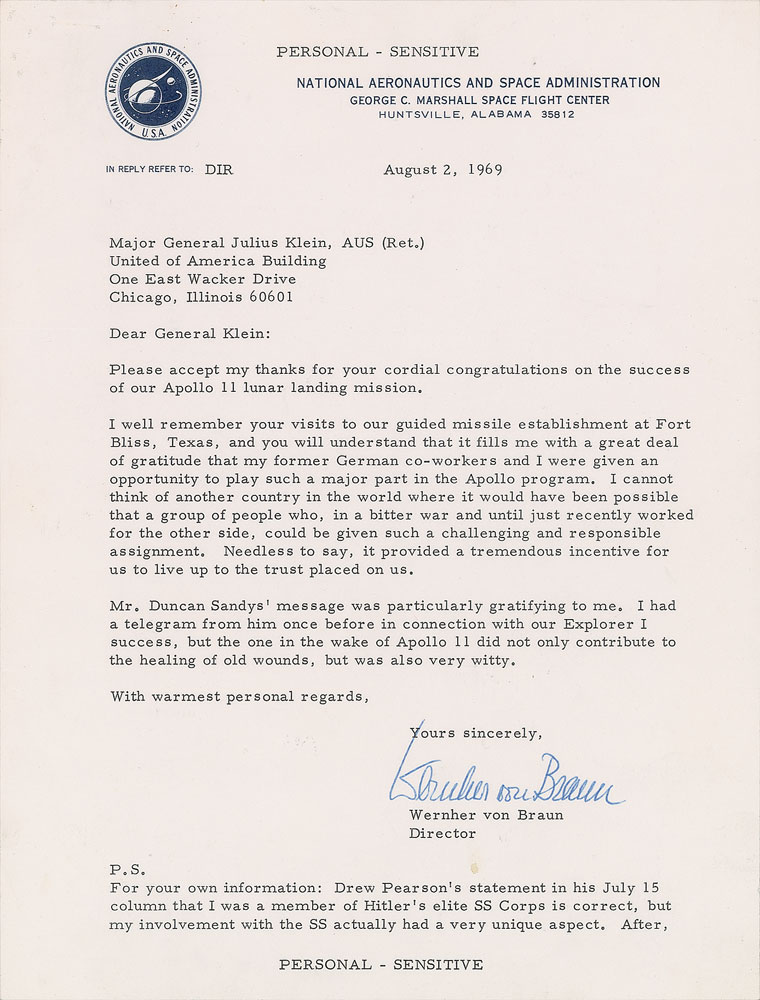 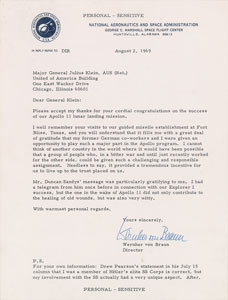 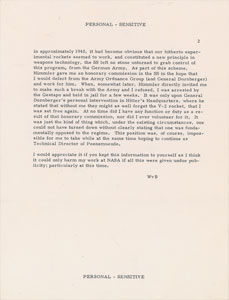 Two weeks after the lunar landing, von Braun reveals his past: “I was a member of Hitler's elite SS Corps”

TLS, two pages, 8 x 10.5, NASA letterhead, August 2, 1969. Letter to Major General Julius Klein, in part: "Please accept my thanks for your cordial congratulations on the success of our Apollo 11 lunar landing mission. I well remember your visits to our guided missile establishment at Fort Bliss, Texas, and you will understand that it fills me with a great deal of gratitude that my former German co-workers and I were given an opportunity to play such a major part in the Apollo program. I cannot think of another country in the world where it would have been possible that a group of people who, in a bitter war and until just recently worked for the other side, could be given such a challenging and responsible assignment. Needless to say, it provided a tremendous incentive for us to live up to the trust placed on us." In a lengthy postscript, he adds: "Drew Pearson's statement in his July 15 [sic] column that I was a member of Hitler's elite SS Corps is correct, but my involvement with the SS actually had a very unique aspect. After, in approximately 1940, it had become obvious that our hitherto experimental rockets seemed to work, and constituted a new principle in weapons technology, the SS left no stone unturned to grab control of this program, from the German Army. As part of this scheme, Himmler gave me an honorary commission in the SS in the hope that I would defect from the Army Ordnance Group…When, somewhat later, Himmler directly invited me to make such a break with the Army and I refused, I was arrested by the Gestapo and held in jail for a few weeks. It was only upon General Dornberger's personal intervention in Hitler's Headquarters, where he stated that without me they might as well forget the V-2 rocket, that I was set free again. At no time did I have any function or duty as a result of that honorary commission…It was just the kind of thing which, under the existing circumstances, one could not have turned down without clearly stating that one was fundamentally opposed to the regime. This position was, of course, impossible for me to take while at the same time hoping to continue as Technical Director of Peenemuende. I would appreciate it if you kept this information to yourself as I think it could only harm my work at NASA if this were given undue publicity; particularly at this time." In fine condition. Accompanied by the original mailing envelope. The recipient of this letter, Julius Klein, had served as an American spy in Germany during World War I, and was stationed in the Pacific Theater during World War II. He also helped ameliorate both German-American and German-Israel relations after World War II.

Drew Pearson was one of the most famous reporters of his day, known for his syndicated ‘Washington Merry-Go-Round’ column in which he criticized public figures. His July 16th story, which otherwise praised von Braun for his accomplishments, also broke the news that he had been a ‘member of Hitler’s elite SS corps, though apparently not in too good standing’—a fact that von Braun here confirms. With the rest of the world focused on the lunar landing, Pearson’s column went largely under the radar and von Braun’s past affiliations were not widely covered elsewhere. This was a great relief to the rocket scientist, who had feared such exposure for years.

In the aftermath of World War II, von Braun and much of his V-2 rocket team—the “former German co-workers” he mentions here—were recruited and brought to the United States in ‘Operation Paperclip’ to bolster American efforts in the ‘Space Race.’ Many of them contributed substantially to the Apollo program: Kurt H. Debus was the first director of the Kennedy Space Center; Hermann Oberth helped lay the foundation for the Saturn V rocket; and Krafft Arnold Ehricke futuristically envisioned man’s role in space. Many of the ‘Operation Paperclip’ immigrants were members of the Nazi Party; von Braun was not only a party member, but one of “Hitler’s elite SS.” His membership in the SS had been encouraged by his military superior, Walter Dornberger, to whom he refers directly in this letter, in order to increase the political pull of the V-2 program. Dornberger, too, came to the US under the auspices of ‘Operation Paperclip’ and played a major role in developing the North American X-15 aircraft.

Despite his long-held fear that public knowledge of his past could undermine the future of NASA, von Braun truthfully responds to Major General Klein’s inquiry about his life in WWII. Written two weeks after American men first set foot on the moon, this letter not only answers many questions about von Braun’s association with the Nazi regime, but reveals the successful lunar landing as a moment of redemption for the hundreds of German immigrants who made an American triumph possible. From The Bill Lende Collection.