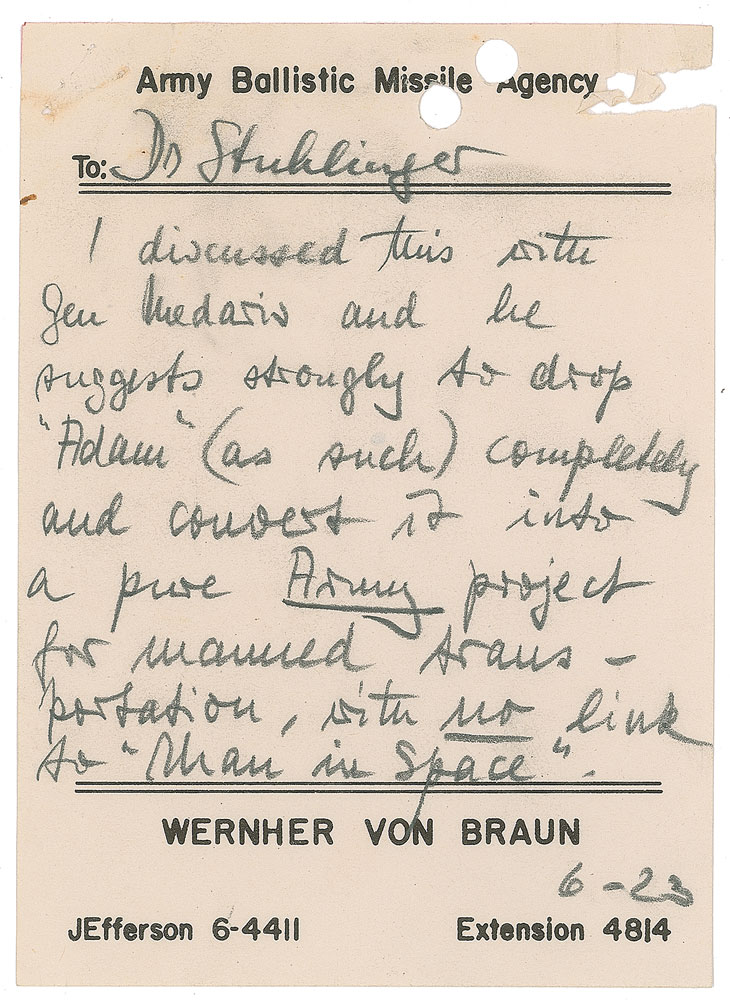 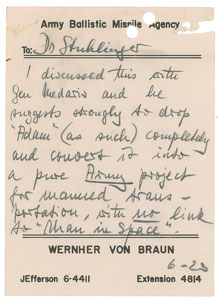 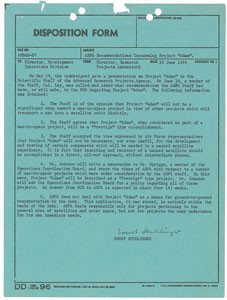 Handwritten note in pencil by von Braun, unsigned, one page, 4 x 5.5, Army Ballistic Missile Agency letterhead, June 23, [1958]. Von Braun responds to a "disposition form" submitted by Ernst Stuhlinger, concerning the proposed "Project Adam." Von Braun's response, in full: "I discussed this with Gen. Medaris and he suggests strongly to drop 'Adam' (as such) completely and convert it into a pure Army project for manned transportation, with no link to 'Man in Space.'" The document signed by Stuhlinger is included, one page, 8 x 10.5, June 10, 1958, in part: "The Staff is of the opinion that Project 'Adam' will not be a significant step toward a man-in-space project in view of other projects which will transport a man into a satellite orbit directly…The Staff agrees that Project 'Adam,' when considered as part of a man-in-space project, will be a 'Prestige' type accomplishment…ARPA does not deal with Project 'Adam' as a means for ground-to-ground transportation by the Army. This application, it was stated, is entirely within the realm of the Army. ARPA feels responsible only for projects pertaining to the general area of satellites and outer space, but not for projects the Army undertakes for its own immediate needs." In very good to fine condition, with paper loss and punch holes to top. Building on the success of his Redstone putting America's first satellite into space in February 1958, von Braun proposed Project Adam—an attempt to put a man in space by the end of 1959. Interagency quarrels—some of which are apparent from this correspondence—ultimately killed the proposal, but its goals were absorbed into Project Mercury, which successfully used a Redstone derivative to launch Alan Shepard into space on May 5, 1961. From The Bill Lende Collection.