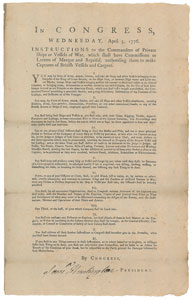 Revolutionary War-era DS, signed “Sam'l Huntington,” one page, 8.25 x 13, April 3, 1776 [signed circa 1779-1780]. A printed broadside headed, "In Congress, Wednesday, April 3, 1776. Instructions to the Commanders of Private Vessels of War, which shall have Commissions or Letters of Marque and Reprisal, authorising them to make Captures of British Vessels and Cargoes." The first article begins: "You may by force of Arms, attack, subdue, and take all Ships and other Vessels belonging to the Subjects of the King of Great-Britain, on the High Seas…except Ships and Vessels bringing persons who intend to settle and reside in the United Colonies, or bringing Arms, Ammunition or warlike Stores to the said Colonies, for Use of such Inhabitants thereof as are Friends to the American Cause." In fine condition.

According to Charles Evans's American Bibliography, this document was first printed by Philadelphia's John Dunlap in 1776 and was then reprinted and in use through 1780. Examples can be found signed by the various presidents of Continental Congress during that time, including John Hancock, Henry Laurens, John Jay, and Samuel Huntington, who served as president from 1779 to 1781. Beginning in 1776, Congress issued letters of marque to privately owned vessels which gave them the ability to operate as warships; providing instructions as to the extent of their authority, this document would have been issued with the privateer commission. Privateers peaked in 1781 with approximately 450 vessels at sea, armed with some 6,735 guns; the Continental Navy, by contrast, had only three ships in commission in 1781. During the years of the Revolution, privateers seized about 600 British vessels. A rare and historically significant document.