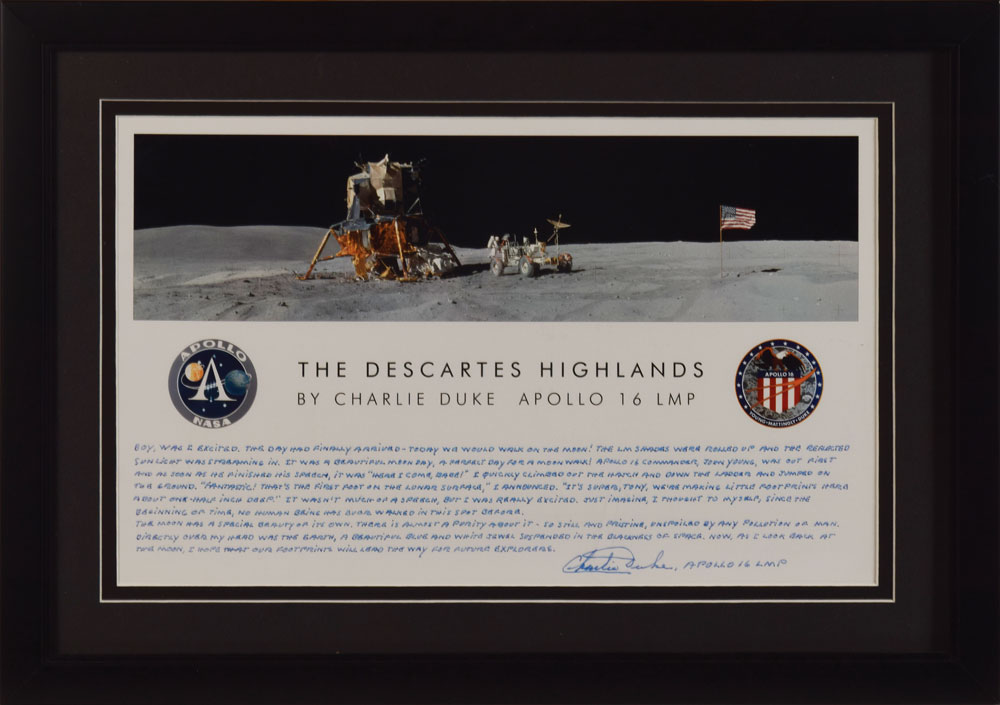 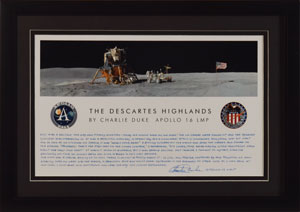 Previous Lot
Next Lot
This lot has closed
Estimate: $300+

Attractive color semi-glossy 15.25 x 9.25 panoramic photo of the Apollo 16 lunar module, rover, and American flag at the Descartes Highlands, signed in thin felt tip, "Charlie Duke, Apollo 16 LMP," who adds a lengthy inscription, "Boy, was I excited. The day had finally arrived—today we would walk on the moon! The LM shades were rolled up and the reflected sunlight was streaming in. It was a beautiful moon day, a perfect day for a moonwalk! Apollo 16 commander, John Young, was out first and as soon as he finished his speech, it was "Here I come, babe!" I quickly climbed out the hatch and down the ladder and jumped on the ground. "Fantastic! That's the first foot on the lunar surface," I announced. "It's super, Tony, we're making little footprints here about one-half inch deep." It wasn't much of a speech, but I was really excited. Just imagine, I thought to myself, since the beginning of time, no human being has ever walked in this spot before. The moon has a special beauty of its own. There is almost a purity about it—so still and pristine, unspoiled by any pollution of man. Directly over my head was the Earth, a beautiful blue and white jewel suspended in the blackness of space. Now, as I look back at the Moon, I hope that our footprints will lead the way for future explorers." Nicely double-matted and framed to an overall size of 20.25 x 14.25. In fine condition.

This item is Pre-Certified by STEVE ZARELLI
Buy a third-party letter of authenticity for $20.00