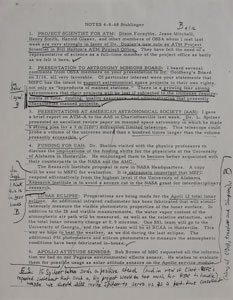 Three pages of typed notes from German rocket scientist Ernst Stuhlinger, each one page, 8 x 10.5, dated 1969 and 1971, bearing pencil and ink notations made by Wernher von Braun, consisting mostly of check marks and underlined passages, with two of the pages signed with his initial "B" in the upper right, and each dated in his own hand. The first page, May 12, 1969, in part: "Dr. Naugle has signed and mailed a letter to Dr. Mueller with the request that Dr. Mueller permit MSFC to perform studies for a Heavy Explorer Program. PD and AD-S had helped to draft this letter." The second, dated October 27, in part: "I had the opportunity to attend three significant meetings recently…There was a remarkable coincidence in the emphasis on several issues, among them the importance of a very active, aggressive, and imaginative earth resources program; the necessity of studying the various aspects of life in a space capsule with great care, including such factors as microflora, work programs, and psychological effects." And the third page, December 20, 1971, in part: "Mr. Jesse Mitchell, Director, Physics and Astronomy Programs, OSSA, visited MSFC on December 14 and 15…I feel that his visit was very productive…According to his remarks, MSFC's effort should also include greater emphasis on advanced technologies for mechanical and thermal control of the LST spacecraft." One page is initialed and dated by three other individuals. Also includes a copy of another page of Stuhlinger's notes, this one dated April 8, 1968. In overall fine condition.