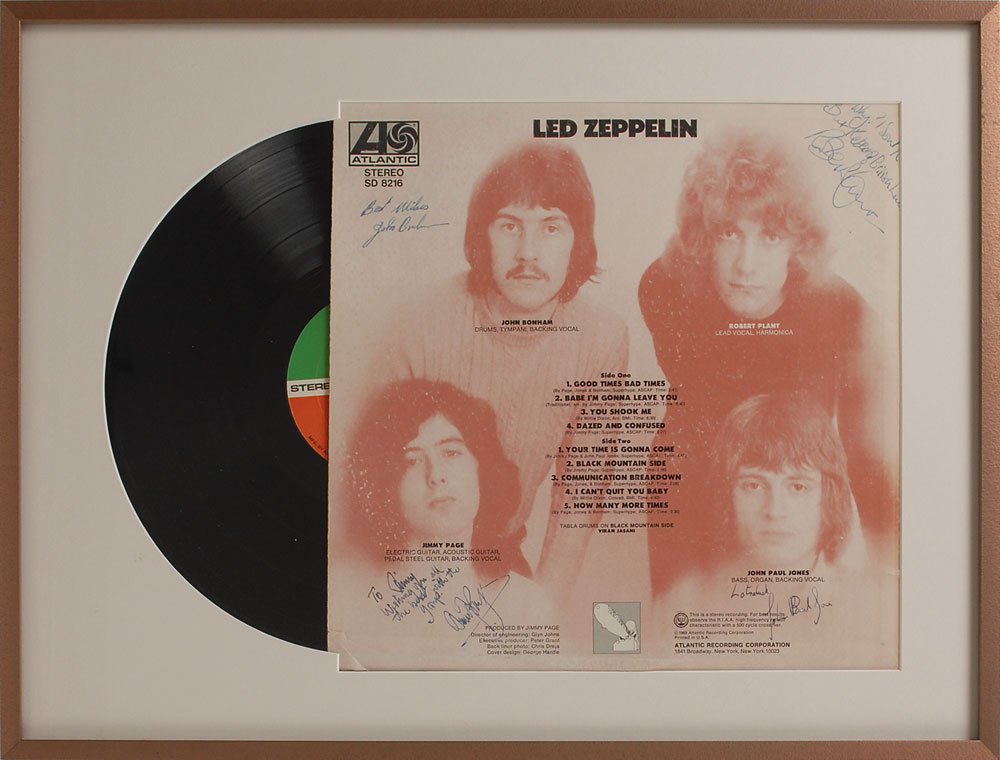 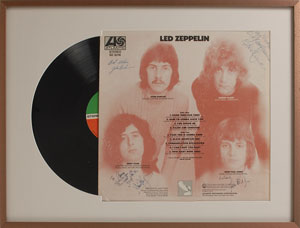 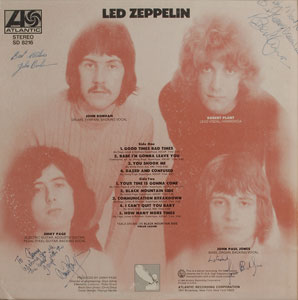 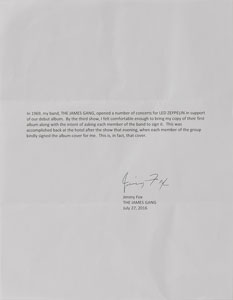 Self-titled debut album signed and inscribed on the back cover in black ink, “To Jimmy, wishing you all the best with the group, Jimmy Page,” “Why? I don’t know, But the best of British luck, Robert Plant,” “Lots of Luck, John Paul Jones,” and “Best wishes, John Bonham.” Attractively matted and framed to an overall size of 21.25 x 16. In fine condition, with some minor creases. The record is included.

Accompanied by a letter of provenance from the original recipient, Jimmy Fox, the founder and drummer for the James Gang, in part: “In 1969, my band…opened a number of concerts for Led Zeppelin in support of our debut album. By the third show, I felt comfortable enough to bring my copy of their first album along with the intent of asking each member of the band to sign it. This was accomplished back at the hotel after the show that evening, when each member of the group kindly signed the album cover for me.”

Known for their hits ‘Funk #49’ and ‘Walk Away,’ the James Gang was a rock and roll trio completed by bassist Dale Peters and guitarist Joe Walsh, who later famously joined the Eagles. In support of their debut, Yer’ Album, the James Gang opened for Led Zeppelin three times over the course of the band’s busy 1969 North American touring schedule. Together the groups shared stages at Cleveland’s Musicarnival on July 20th, Buffalo’s Kleinhans Music Hall on October 30th, and Syracuse’s Onondaga Veterans Auditorium on November 1st, with Fox obtaining the autographs at a local Holiday Inn following the final venue date. Fast becoming the largest rock band in the world, Led Zeppelin released their hugely popular second album, Led Zeppelin II, on October 22, 1969, adding further significance to the period in which this record was signed. Deriving from the personal collection of a musician who actually toured with Led Zeppelin during the band’s meteoric rise of the late 1960s, this is a wholly rare and highly displayable album highlighted by its full cast of vintage signatures. Pre-certified REAL.