The only Washington letter which mentions the YorkTown capitulation 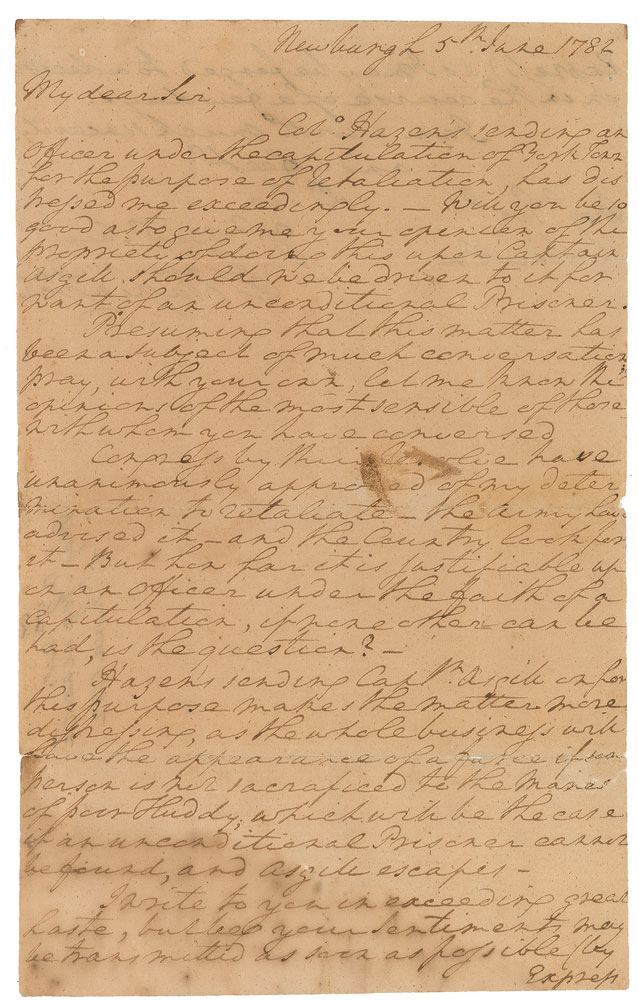 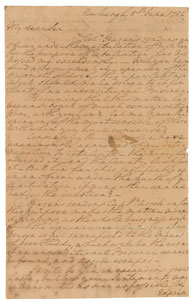 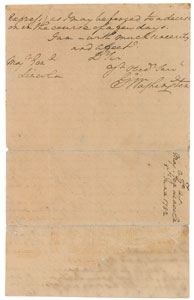 The only Washington letter which mentions the YorkTown capitulation

During the tense months after the British capitulation (conditional surrender) after the Battle of YorkTown, George Washington is faced with a dilemma that will test his character and the recent peace with the British in an intense drama that is considered the first international crisis in United States history.

Letter to Maj. General Benjamin Lincoln. In full: “Colo. Hazen’s sending an officer under the capitulation of York Town for the purpose of retaliation, has distressed me exceedingly. Will you be so good as to give me your opinion of the propriety of doing this upon Captain Asgill should we be driven to it for want of an unconditional prisoner. Presuming that this matter has been a subject of much conversation, pray, with your own, let me know the opinions of the most sensible of those with whom you have conversed. Congress by their resolve have unanimously approved of my determination to retaliate—the Army have advised it—and the Country look for it—But how far it is justifiable upon an officer under the faith of a capitulation, if none other can be had, is the question? Hazen’s sending Captn Asgill on for this purpose makes the matter more distressing, as the whole business will have the appearance of a farce, if some person is not sacraficed [sic] to the Manes of poor Huddy; which will be the case, if an unconditional Prisoner cannot be found, and Asgill escapes. I write to you in exceeding great haste, but beg your sentiments may be transmitted as soon as possible (by Express) as I may be forced to a decision in the course of a few days.” In very good to fine condition, with archival repairs to separated horizontal folds and neatly trimmed edges.

The only Washington letter which mentions the YorkTown capitulation—a fascinating Revolutionary War date letter involving a major incident impacting three countries that was jeopardizing a fragile peace between Great Britain and the United States after the British capitulation at YorkTown. This historically significant letter reveals as most don’t, several of George Washington’s remarkable character traits; his humane concern at the taking of an innocent human life; yet his steely resolve to retaliate for a murdered American; his honor as a soldier; and ultimately his wisdom and humility as a commander, as well as showing his temper and anger in this situation, “has distressed me exceedingly.”

During the tense months after the Battle of YorkTown, negotiations between the United States and Great Britain began in Paris, France to end the American Revolution which ultimately would not be finalized until The Definitive Treaty of Paris was signed on Sept. 3,1783. This incident was part of the reason for the long delay. After YorkTown the British still controlled New York City and held thousands of American soldiers as prisoner of war. Likewise the Americans also held thousands of British prisoners making the situation very volatile for a temporary peace to hold until the final treaty would be signed. Raids and counterattacks were rampant along the New York frontier. One of these became especially trying and endangered peace talks with the British. A Tory officer, Philip White had been killed while a captive. The Tories insisted that he had been tortured to death. In reprisal, a company of Jersey loyalists to the King, led by Captain Richard Lippincott, captured Captain Joseph ‘Jack’ Huddy of the New Jersey militia from a British prison ship, and carrying him to shore, hanged him from a tree with a placard on his back; “We, the Refugees…Taking vengeance for the numerous cruelties….have made use of Captain Huddy as the first object to present to your view, and further determine to hang man for man while there is a refugee in existence. Up Goes Huddy for Philip White.”

Public outcries and protests erupted including threats of counter-assassination. Recognizing a situation that could easily explode Washington decided to take firm action with the British command. As “the only means left to put a stop to such inhuman proceedings”, he would select by lot a captain from among the British prisoners in his hands and hang that captain if Lippincott were not delivered to him for trial. All this was in strict accordance with the Laws and Usages of War. Selected for execution from thirteen prisoners was the ‘unfortunate’ note pulled out of a hat by nineteen year old Captain Charles Asgill of the Foot Guards. Asgill was the only son of Sir Charles Asgill, a prominent friend of the American cause, with a French wife. Washington, found himself in a further quandary with this selection. Under Article14 of the terms of capitulation at YorkTown Asgill was protected from reprisals. Under the terms of Cornwallis’s capitulation, Asgill as an officer was to be a protected prisoner, not subject to hostage taking or retaliation. Washington knew that the American public and Congress wanted swift revenge but also knew the harmful consequences this would bring in the killing of a protected soldier. The British would use that as a violation of the YorkTown capitulation to their benefit. Washington also knew this could further delay the permanent peace treaty and stalled for time. From May 1782 through Nov. 1782 Charles Asgill became an international figure of compassion. During this crisis, Washington turned to Maj. Gen. Benjamin Lincoln, formerly the second in command of the Continental army, who was now serving as Secretary of War for his advice. Lincoln participated in the Battle of YorkTown, and had been given the honor by Washington of accepting the British surrender.

Ultimately Asgill’s mother Sarah (part French) appealed to the French foreign minister the Comte de Vergennes, who was ordered by King Louis 16 to communicate with Gen. Washington, that it was his and the Queen Marie Antoinette’s wish that Asgill be spared. Vergennes letter to Washington expressed the King’s feeling that “Captain Asgill is doubtless your prisoner, but he is among those whom the arms of the King contributed to put into your hands at YorkTown.” This letter as well as a letter written by Asgill’s mother pleading for his life was read on the floor of Congress before voting on the matter. By an Act of Congress on November 7, 1782, the Commander in Chief ”was directed to set Captain Asgill at liberty” much to Washington’s relief. France was far too important an ally of the fledging United States to risk jeopardizing the relationship over this vendetta. This incident created an international crisis (considered America’s first international crisis) involving the King of Great Britain, the King of France and the new government of the United States and played out for over seven months causing a halt in the negotiations on the Treaty of Paris. Thomas Paine also tried to influence matters in this incident by detailing the “Asgill Affair” in an open letter to Sir Guy Carleton (who had refused to turn over Lippincott—forcing Washington’s hand) as one of the sixteen essays (A Supernumerary Crisis)from his highly influential Revolutionary War pamphlet series “The Crisis” dated May 31, 1782 just 5 days before Washington’s letter to Maj. Lincoln.

This extraordinary letter is not only remarkable as the only GW letter mentioning the YorkTown Capitulation but also deals specifically with Washington’s dilemma in honoring the terms of capitulation agreed to by both Washington and Cornwallis at YorkTown. No other Washington letter to appear at auction in the past 40 years refers to it.