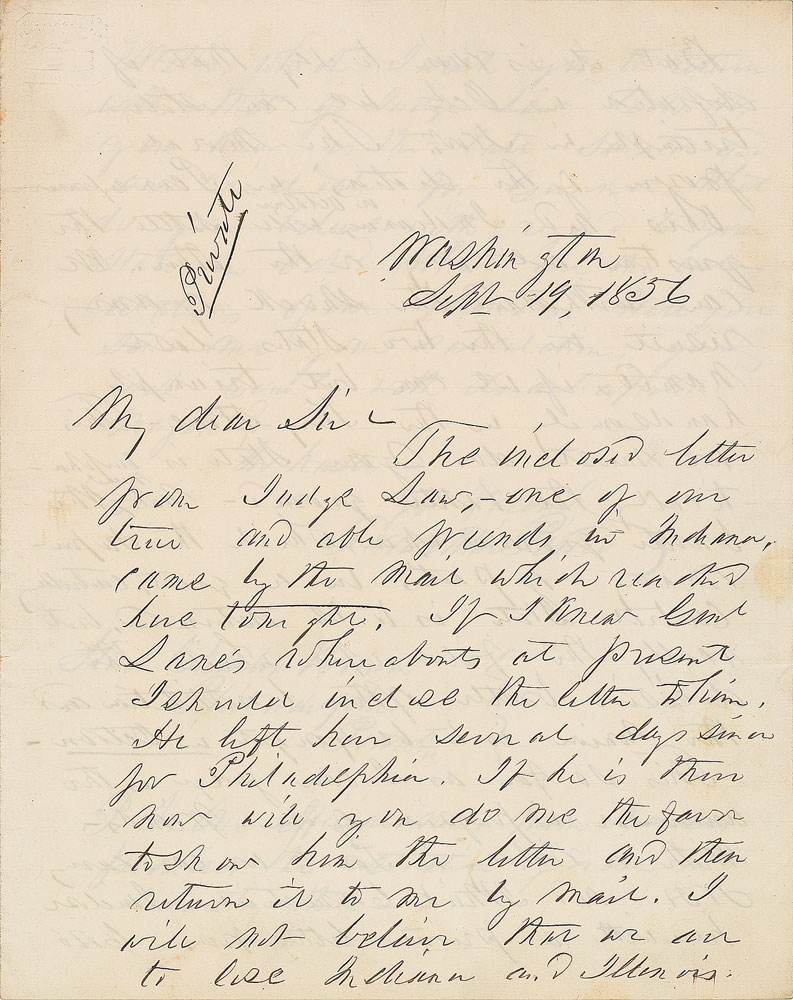 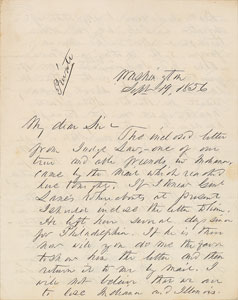 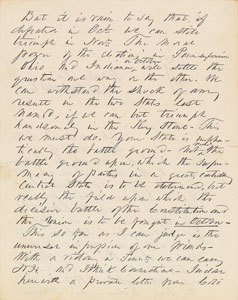 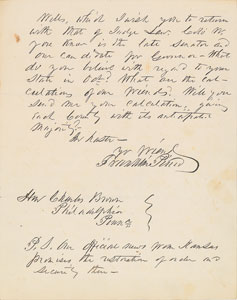 ALS as president, three pages on two adjoining sheets, 7.75 x 9.75, September 19, 1856. Marked “Private” at the top, a letter to Charles Brown, a Democratic congressman from Philadelphia, in full: “The inclosed letter from Judge Law—one of our true and able friends in Indiana—came by the mail which reached here tonight. If I knew Genl Lane’s whereabouts at present, I should inclose the letter to him. He left here several days since for Philadelphia. If he is there now with you, do me the favor to show him the letter and then return it to me by mail. I will not believe that we are to lose Indiana and Illinois. But it is vain to say that if defeated in Oct., we can still triumph in Nov. The moral power of the election in Pennsylvania, Ohio and Indiana in October will settle the question one way or the other. We can withstand the shock of any result in the two states last named, if we can but triumph handsomely in the Keystone—This we must do. Your state is emphatically the battle ground—not merely the battle ground upon which the supremacy of parties in a great controlling central state is to be determined, but really the field upon which the decisive battle of the Constitution and the Union is to be fought in October—This so far as I can judge is the universal impression of our friends—With a victory in Penn. we can carry N. H. and I think Connecticut. I inclose herewith a private letter from Col. Wells, which I wish you to return with that of Judge Law. Col. W. you know is the late senator and our candidate for Governor—What do you believe with regard to your state in October? What are the calculations of our friends? Will you send me your calculation, giving each county with its anticipated majority?” Pierce adds a brief postscript, “Our official news from Kansas promises the restoration of order and security there.” In fine condition.

In his effort to expand farmland and implement a Midwestern Transcontinental Railroad, Pierce staunchly promoted and signed the Kansas-Nebraska act of 1854, a law that notoriously condoned the use of popular sovereignty. In addition to nullifying the Missouri Compromise of 1820 and steering the nation towards a civil war, the passing of the bill fractured the Democratic and Whig parties, created the GOP, and ended any chance of a presidential reelection for Pierce. A steadfast loyalist to the Democratic cause, Pierce endorsed nominee James Buchanan when his own bid collapsed, campaigning fervently in advance of the looming local and state elections in October and presidential balloting in November. Prior to his leaving as commander-in-chief, Pierce successfully restored order in ‘Bleeding Kansas’ by installing John W. Geary as its territorial governor, a decision shadowed in the letter’s postscript. A uniquely interesting letter that captures Pierce during the final months of his presidency, using the last of his dwindling influence to lobby on behalf of his fellow Democrat and eventual successor. Pre-certified PSA/DNA.