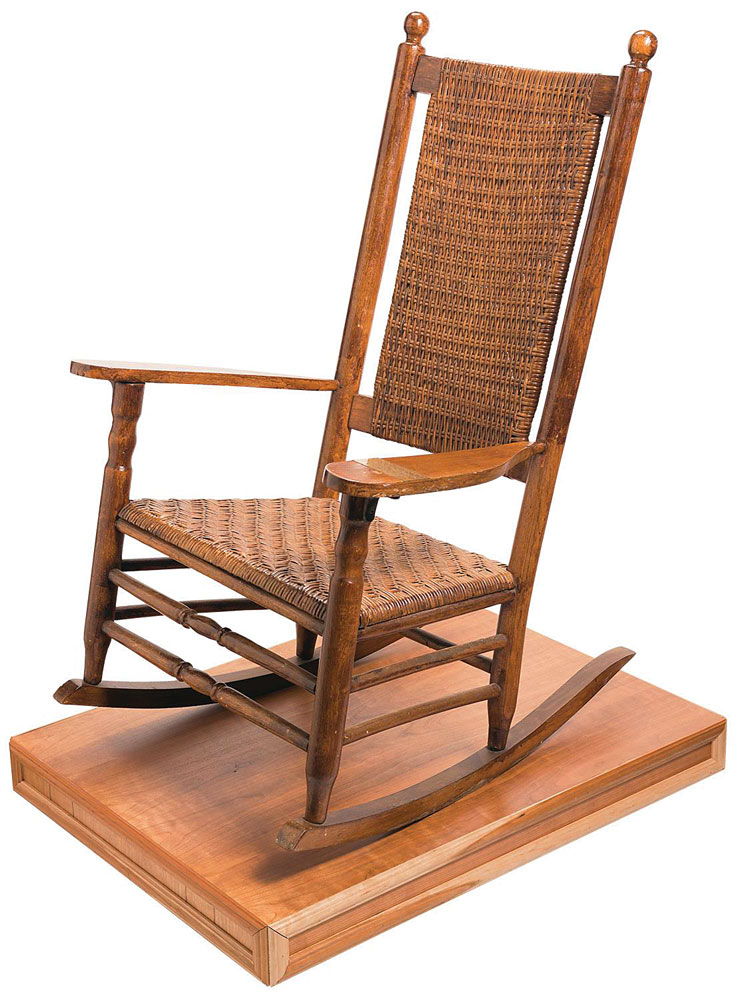 Amazing, well-documented wooden rocking chair used by John F. Kennedy, presented by the Kennedys to longtime family cook Nellie McGrail upon her retirement in 1994. The iconic rocking chair measures approximately 33.25 x 43.5 x 28 and is constructed of a hardwood frame with woven cane seat and back, and now bears an affixed brass plaque on one arm reading, “President Kennedy’s Chair, For Nellie, With Love And Gratitude For Your Years Of Friendship And Service, From The Entire Kennedy Family.” Ironclad provenance is supplied in a TLS by Senator Ted Kennedy, March 21, 2000, in part: “This letter is to verify that on behalf of the members of my family, I presented one of the rocking chairs used by President Kennedy to Nellie McGrail when she retired in 1994.” To the best of our knowledge, this is the only Kennedy rocker certified by a family member. In fine condition.

President Kennedy became famous for his rocking chair, which he used to alleviate his chronic back pain after a recommendation from his personal doctor Janet G. Travell. He is known to have owned about fourteen similar chairs, which he put anywhere he frequented—in the Oval Office, White House residence, his getaways in Hyannis Port and Palm Beach, and even aboard Air Force One. With numerous famous images showing JFK in his rocking chair, it has become one of the enduring symbols of his presidency.

The recipient of this example, Nellie McGrail, was a native of Palm Beach, Florida, and cooked for the family whenever they visited their Florida vacation home, and she was Rose Kennedy's personal cook until 1984 when the Kennedy matriarch suffered a stroke and could no longer travel south. Still, Nellie was so beloved by the family that she was flown up to Hyannis Port every year to celebrate Rose’s birthday.

Other items included reveal the close relationship between McGrail and the Kennedy family, dated from 1973 to 1983, including: a letter from Jacqueline Kennedy Onassis apologizing for a change in plans for the winter, making her unable to enjoy McGrail’s delicious cooking; a letter from Sargent Shriver praising McGrail for her devotion to caring for Rose Kennedy; a letter from Joan Kennedy inviting her to attend a performance at the Kennedy Center; a letter from Eunice Kennedy Shriver thanking McGrail for her cooking and requesting a chicken recipe; a thank-you card from Ethel Kennedy; an invitation to Caroline Kennedy’s wedding; a snapshot of McGrail with Ted and Rose Kennedy; a snapshot of McGrail with Rose Kennedy’s birthday cake; an oversized photo of McGrail with Edward Kennedy, Jr., and his birthday cake, signed and inscribed to McGrail by Teddy, Jr.; and a letter from John Kerry thanking her for her care. As an iconic piece of Kennedy lore with impeccable provenance, this rocking chair is an absolutely remarkable and historically significant piece.