Secretary of State Jefferson prepares for “conferences on Lake Erie with the Northern & Western Indians,” who “may be disposed to look back to antient treaties” 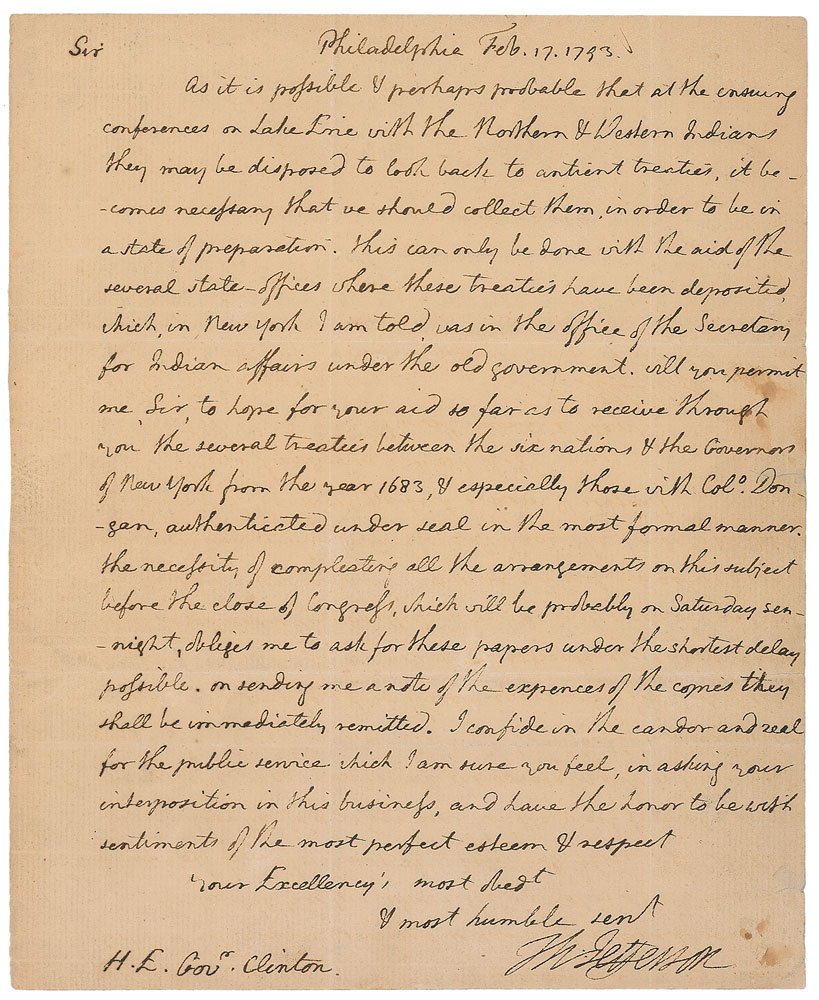 Secretary of State Jefferson prepares for “conferences on Lake Erie with the Northern & Western Indians,” who “may be disposed to look back to antient treaties”

ALS signed “Th: Jefferson,” one page, 7.5 x 9.25, Philadelphia, February 17, 1793. Letter to New York Governor George Clinton. In full: “As it is possible & perhaps probable that at the ensuing conferences on Lake Erie with the Northern & Western Indians they may be disposed to look back to antient treaties, it becomes necessary that we should collect them in order to be in a state of preparation. This can only be done with the aid of the several state offices where these treaties have been deposited which, in New York I am told, was in the office of the Secretary for Indian affairs under the old government. Will you permit one, Sir, to hope for your aid as far as to receive through you the several treaties between the six nations & the Governors of New York from the year 1683, & especially those with Colo. Dongan, authenticated under seal in the most formal manner. The necessity of compleating all the arrangements on this subject before the close of Congress, which will probably be on Saturday night, obliges me to ask for these papers under the shortest delay possible. On sending me a note of the expenses of the copies they shall be immeadiately remitted I confide in the candor and seal for the public service which I am sure you feel, in asking your interposition in this business.” In fine condition, with intersecting folds.

This letter concerns the Iroquois, a northeast Native American group of ‘Six Nations’ that had previously aligned themselves with the British during the Revolutionary War. In postwar years, the state of New York was able to make lopsided agreements with many of the groups, usurping them from their land and confining them to reservations—Governor Clinton and colluding land speculators took advantage of the situation, leading the Iroquois to be leery of his administration. Thomas Jefferson was preparing for significant negotiations between the federal government and the Iroquois Nation, and thus sought treaties ancient and modern that had previously been made. Ultimately the important agreement, the Treaty of Canandaigua, was signed the following year, and established peace and friendship between the United States and the Six Nations of the Iroquois, affirming their land rights and finalizing boundaries in the state of New York. Pre-certified PSA/DNA.