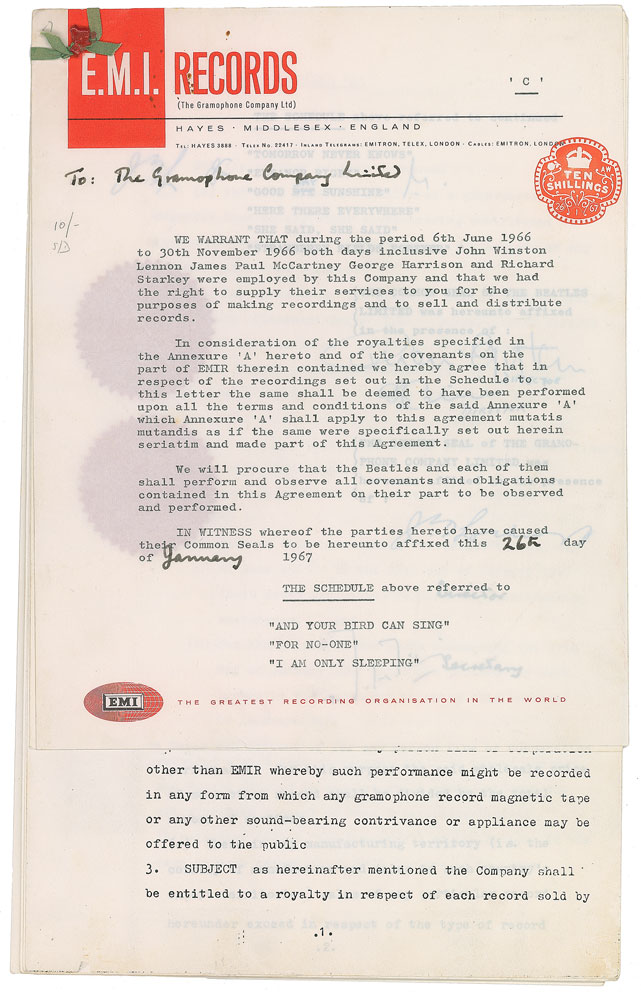 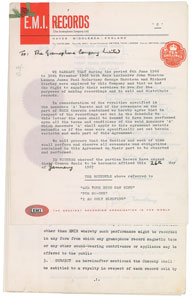 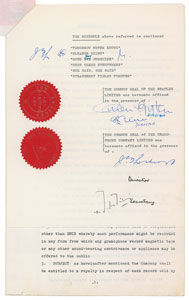 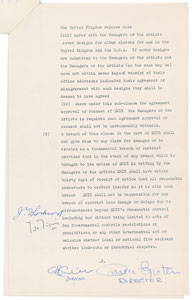 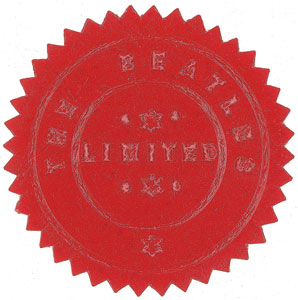 DS, signed twice by Brian Epstein and Joseph Lockwood, nine pages, 8 x 13, January 26, 1967. EMI Records royalty document with two-page cover letter, in part: “We Warrant That…John Winston Lennon James Paul McCartney George Harrison and Richard Starkey were employed by this Company and that we had the right to supply their services to you for the purposes of making recordings and to sell and distribute records. In consideration of the royalties specified in the Annexure ‘A’…we hereby agree that in respect of the recordings set out in the Schedule to this letter…all the terms and conditions…shall apply…The Schedule above referred to: ‘And Your Bird Can Sing,’ ‘For No-One,’ ‘I Am Only Sleeping,’ ‘Tomorrow Never Knows,’ ‘Eleanor Rigby,’ ‘Good Day Sunshine,’ ‘Here There Everywhere,’ ‘She Said, She Said,’ ‘Strawberry Fields Forever.’” Signed at the conclusion of the cover letter by Brian Epstein and Joseph Lockwood, and signed again by both at the conclusion of the annexure outlining the royalty terms. The document also bears blindstamped “The Beatles Limited” seals on both signed pages. In fine condition.

With the exception of ‘Strawberry Fields Forever,’ which appeared on Magical Mystery Tour, all of the songs listed were released on Revolver, the Beatles’ seventh studio album. These represent some of the band’s best works and Revolver is quite often recognized as their top album; not to mention the outlier, ‘Strawberry Fields Forever,’ arguably their most influential song. They had finished recording ‘Strawberry Fields’ only a month before this document and intended to include it on their upcoming Sgt. Pepper’s album. However, under pressure from EMI for new material, Brian Epstein convinced the Beatles to release it as a single, which came out only two weeks after this document was signed. A truly exceptional Beatles document with direct relevance to their later work. Pre-certified REAL.